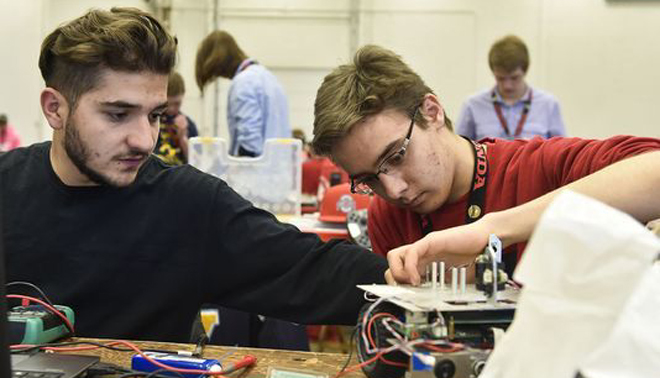 Over 6,000 miles away from home in Armenia, Simon Zohrabyan (left) and his teammate Areg Karapetyan take time to modify their robot during first day of the National Robotics Challenge held at the Veterans Memorial Coliseum on Thursday.(Photo: Matthew Hatcher/The Marion Star)

And there is no direct flight between the two cities. At least not yet.

Despite the great distance, students from Ayb High School in Armenia’s capital city made their secondtrip to Marion this week to compete in the National Robotics Challenge. The three-day open robotics competition started Thursday and continues through Saturday at Veterans Memorial Coliseum.

“Last year we heard about it and decided to participate,” said Vazgen Gabrielyan, director of the robotics laboratory at Ayb High School. “We really liked that the competition has no limits, not limiting us to any kits and having the chance to create things from scratch. That’s our approach to robotics.”

That approach proved to be successful as the Ayb students captured a Honda Innovation Award and a silver award in the lightweight/self-controlled sumo robot competition at the 2016 edition of the NRC.

“We’ve had a lot of success in both local and international championships since the school opened,” Gabrielyan said.

The Ayb team’s accomplishments in Marion had both the school and the country “boiling,” according to Gabrielyan.

“That was a a big pleasure for us to get that (Honda Innovation Award), because we put a lot of hard work into that robot,” said Armen Barseghyan, a senior at Ayb. “Reporters were coming to our school and doing interviews, asking how it was to go to the National Robotics Challenge from a little country and take the silver medal and the higher award.”

Gabrielyan said more than 30 students participate in robotics at Ayb.

National Robotics Challenge official Tony Fisher said having teams from outside the United States participate in the competition displays how education transcends borders and culture.

“I think it helps us understand that sometimes the solution isn’t in our backyard, it’s across the sea,” he said.

Fisher said it’s rewarding to look back over the 14 years that the competition has been held in Marion and see how students who participated in it have progressed into adulthood.

“Those competitors that we had in the early 2000s are now in positions with Honda, with MTD, with large engineering groups,” he said. “They’re saying, ‘Hey, we want to give back. Let’s see what our business can do to support the NRC. This is where I got my start, I want to help somebody else have a start as well.’ … The skills and the types of employees that these businesses are looking for are being developed here.”

«50 PLUS»: The initiative launched in numerous communities in the Diaspora gives new impetus to the Global Armenian Mobilization of Resources