No Peace Agreement Possible Without Consent of Karabakh, Says Lavrov 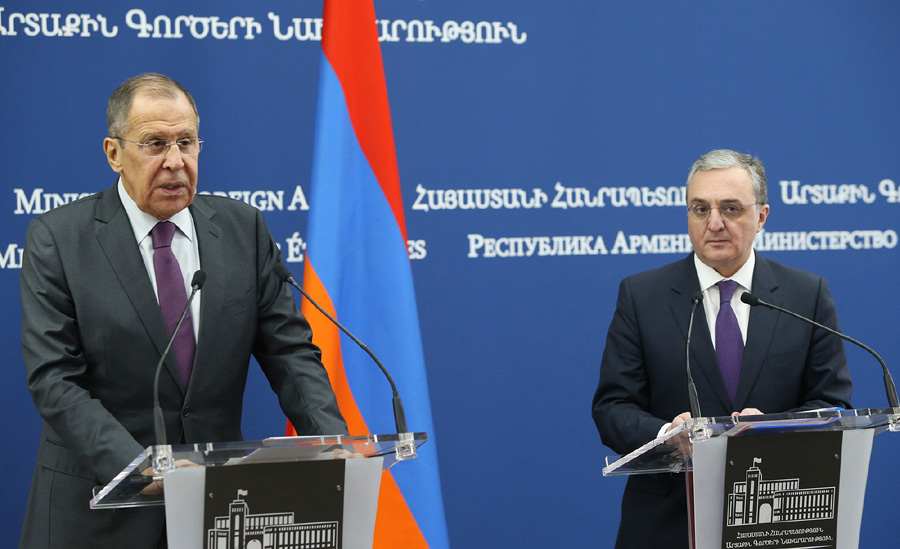 It will be impossible to develop any kind of agreement regarding the Nagorno-Karabakh conflict resolution with the people of Artsakh, Russian Foreign Minister Sergey Lavrov said on Monday in Yerevan.

“During the earlier phase of the conflict, when the military operations were halted, Nagorno Karabakh was a participant in the negotiations; however at a certain phase one of Armenia’s former presidents decided that Nagorno Karabakh’s interest must be represented by Yerevan,” Lavrov said at a press conference with his Armenian counterpart Zohrab Mnatsakanyan in Yerevan when asked about Artsakh’s absence in the negotiation process.

“In any case, we, as co-chairs, can only add that the process proceeded upon a general consent. It will be impossible to develop any agreement without the people of Nagorno Karabakh, its population. Armenia would simply not sign it,” Lavrov, who is on a two-day visit to Yerevan, declared.

In further discussing the Karabakh conflict resolution, Lavrov cited a statement by Prime Minister Nikol Pashinyan who said that any solution for the conflict resolution should be acceptable for the people of Armenia, Artsakh and Azerbaijan.

“As for the Nagorno-Karabakh conflict resolution principles, I can once again cite Armenian Prime Minister Nikol Pashinyan’s statement according to which it is necessary to take into account the wishes of the Armenian, Artsakh and Azerbaijani people. In principle, the territorial integrity, self-determination and the exclusively peaceful resolution of the conflict are etched in all documents which are being discussed between the sides. In any case the final decision should take into consideration all these principles,” said Lavrov.

Lavrov also said that Russia was ready to facilitate thawing of relations between Armenia and Turkey, stressing that it came from Moscow’s interests to want to have normal relations with its neighbors.

“We are not talking about any rapprochement or warming, when we have neighbors that are given by history and geography. We develop relations with each and every one of them. This is true in terms of all our partners in the CSTO, CIS, EEU, when it comes to countries such as Turkey, Iran, and the eastern European countries. We want to have normal relations with all. And we assist in overcoming the existing problems between Armenia and Turkey with all means. In 2010 we contributed to the signing of the Zurich Protocols in the most active way,” said Lavrov who lamented that the protocols process did not move further.

“We continue to be ready. But this requires the interest of the two sides. We are ready to use our opportunities to move forward the normalization of relations between Armenia and Turkey. We absolutely do not see a reason to suppose that someone will start a war between these countries, but in any case our entire policy is based on establishing peace, co-existence and mutually beneficial cooperation here,” added Lavrov.