UN official deletes his tweet on Armenian Genocide, after pressure from Turkey 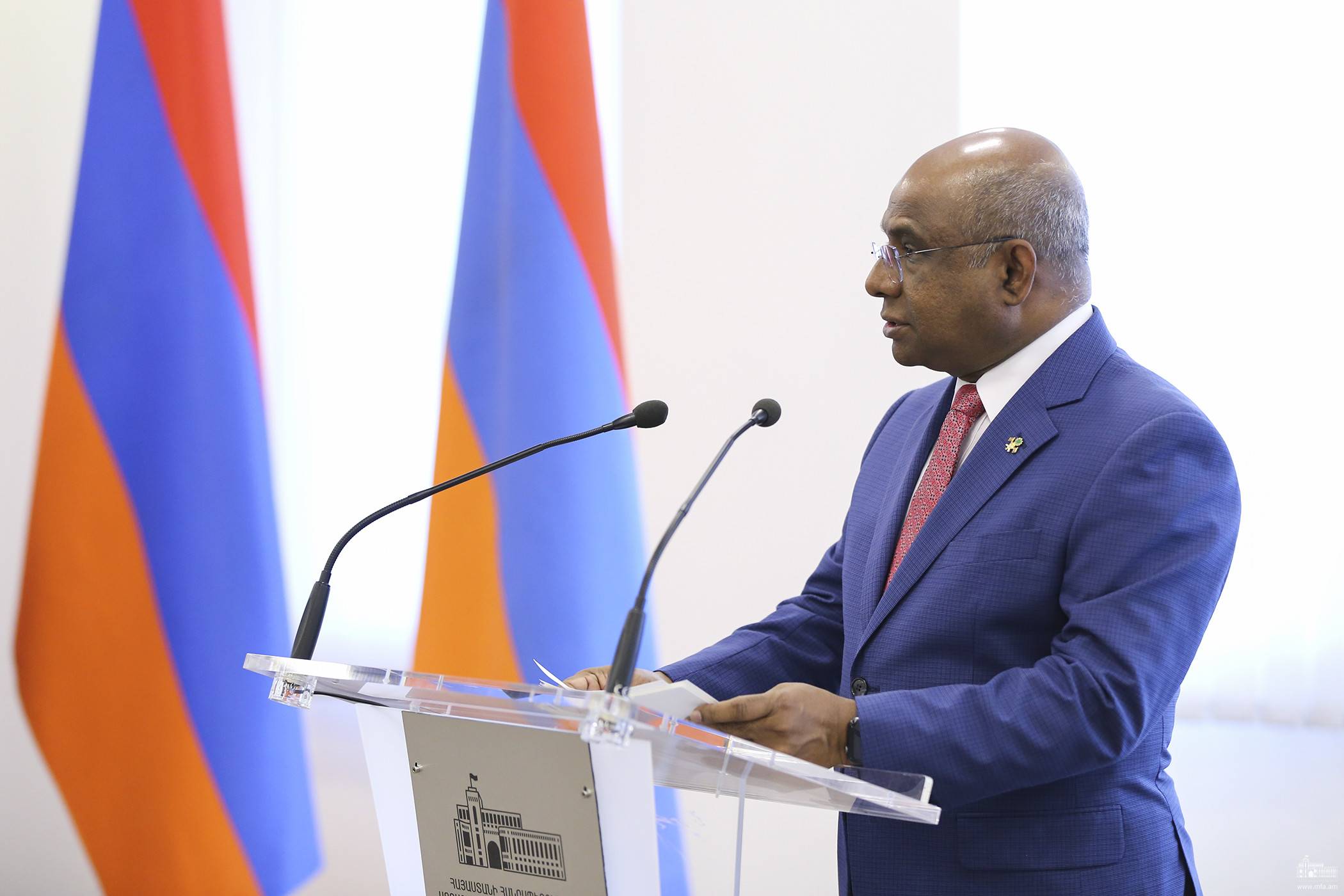 The Turkish government resorted to its customary bullying tactics last week to force a high-ranking United Nations (UN) official to delete his tweet on the Armenian Genocide.

On July 27, president of the United Nations General Assembly Abdulla Shahid issued a tweet with four photos showing him placing a wreath at the Armenian Genocide memorial in Yerevan. He wrote in his tweet: “Laid a wreath at the Memorial to the Victims of Armenian Genocide. Special thanks to Museum-Institute Director Harutyun Marutyan & Hasmik Martirosyan for a tour of the Museum.” Marutyan presented to the visitor books on the Armenian Genocide and showed him the three cross-stones dedicated to the memory of Armenians who were killed by Azerbaijan.

The wreath placed by the UN General Assembly president had white and blue flowers and was decorated with a blue ribbon with “United Nations” written on it. In the other photos of his tweet, he was seen observing a moment of silence at the eternal flame of the memorial, taking a tour of the Armenian Genocide museum, and signing the guest book in which he wrote: “I am very moved by my visit to this museum. I thank you for warmly receiving me as a part of my visit to Armenia.”

During his three-day visit to Armenia, the president of the UN General Assembly met with various Armenian officials, including the Armenian President Vahagn Khachatryan, Deputy Prime Minister Hambardzum Matevosyan, Foreign Minister Ararat Mirzoyan, Vice Chairman of the Parliament Ruben Rubinyan and female diplomats of the Foreign Ministry. He also spoke at the graduation ceremony of the Armenian Foreign Ministry’s Diplomatic School.

Shortly after Shahid’s visit and tweet, the Turkish Foreign Ministry issued an official statement condemning him for visiting the Armenian Genocide Memorial and alleging that his trip “to Armenia has been exploited with the purpose of exposing one-sided Armenian claims and it is in that context that he paid a visit to the so-called genocide memorial.” The Turkish Foreign Ministry added: “He would have been expected to act in a fair and impartial manner, to be more careful and responsible in this regard. Representatives acting on behalf of the UN authorized bodies must carry out their duties in accordance with the UN legal instruments and relevant norms and rules of international law, particularly the Convention on the Prevention and Punishment of the Crime of Genocide dated 1948. We condemn and reject attempts to distort historical facts and international law through political manipulation. Türkiye is of the opinion that the facts regarding the events of 1915 should be dealt with in a full, fair and honest framework.”

Shahid, who is also the Foreign Minister of the Republic of Maldives, immediately deleted the tweet about his visit to the Armenian Genocide Memorial, succumbing to Turkish pressure.

Whereas the Turkish government had succeeded in imposing its will on the UN official, not a single Armenian official who met with the President of the UN General Assembly bothered to question him about why he deleted his tweet, let alone criticize him.

Of course, nothing can excuse the submissive behavior of the high-ranking UN official who caved in to the directive of a dictatorial regime, contrary to the UN principles that he was sworn to uphold. Two sources confirmed some of the actions of the Turkish government. The Passblue.com website disclosed that Turkey rescinded its invitation to Shahid to visit Ankara. The Turkish Superhaber.tv further revealed that Turkey withdrew Shahid’s invitation to attend the Ambassadors’ Conference to be held in Ankara on August 8-12. Turkey probably used other behind-the-scenes measures to pressure Shahid.

It is highly offensive that Shahid, by deleting his tweet, disrespected the Armenian Genocide which was corroborated by the UN itself. On August 29, 1985, the UN “Sub-Commission on Prevention of Discrimination and Protection of Minorities” adopted a report on genocide by a vote of 15 in favor, one opposed and four abstentions. The “Revised and Updated Report on the Question of the Prevention and Punishment of the Crime of Genocide” was prepared by British Special Rapporteur Benjamin Whitaker. Paragraph 24 of that report states: “The Nazi aberration has unfortunately not been the only case of genocide in the twentieth century. Among other examples which can be cited as qualifying are the German massacre of Hereros in 1904, [and] the Ottoman massacre of Armenians in 1915-1916 …” The report also includes an extensive bibliography on the Armenian Genocide. An earlier version of that report, prepared by UN Special Rapporteur Nicodeme Ruhashyankiko of Rwanda, had included in its paragraph 30 a reference to the Armenian Genocide which was subsequently deleted after excessive pressure by the Turkish government. I know these facts first-hand because I spent from 1978 to 1985 at the UN in Geneva as the representative of a non-governmental organization on human rights, countering the repeated Turkish attempts to delete the reference to the Armenian Genocide.

The Armenian government may not be aware of these facts. I suggest that the Armenian Foreign Ministry file a strongly-worded complaint with the Secretary-General of the United Nations to have the deleted tweet reinstated and apologize to the Armenian nation.