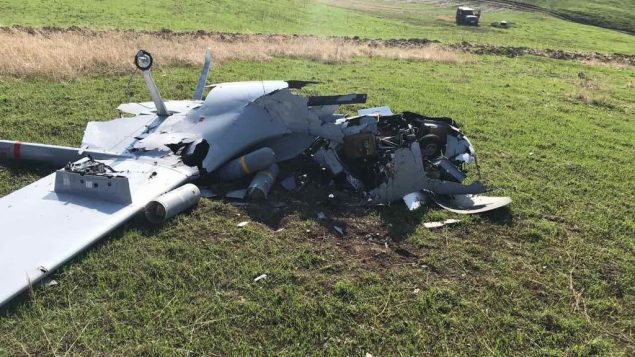 This photo released by the Armenian Ministry of Defence in October shows the wreckage of a Turkish Bayraktar TB2 drone shot down by Armenian forces in Nagorno-Karabakh on Monday. The drone is equipped with Canadian optical sensors and target acquisition systems. (Armenian Ministry Of Defence/Twitter)

The Globe and Mail

Documents released to a Parliamentary committee probing how Canadian-made air-strike targeting gear ended up in the 2020 Azerbaijan-Armenia conflict show the Trudeau government circumvented an arms embargo last year to send the same equipment to Turkey after assurances from Ankara that it would only be used to protect civilians under attack in Syria.

The House of Commons foreign affairs committee’s inquiry has focused to a significant degree on how this restricted Canadian imaging technology, made by Burlington, Ont.-based L3Harris Wescam, turned up in Turkish-made drones being operated by Azerbaijan in the battle over Nagorno-Karabakh. The Wescam gear had been authorized for export to Turkey only.

The information made public Friday appears to confirm what the department of Global Affairs has been separately investigating for nearly six months – that Canadian military goods were illegally diverted from their intended customer and use.

As The Globe and Mail first reported, Canada issued export permits last May for the delivery of seven MX-15D air-strike targeting systems made by L3Harris Wescam to Turkish drone-maker Baykar. That green light for shipments to Turkey came despite an arms embargo in place since late 2019 that prohibited the export of most categories of military gear to Turkish customers.

But Canadian government documents released to the foreign affairs committee, and first made public on Friday, show Turkey had pressed Ottawa to allow the shipment on the grounds it was necessary to safeguard civilians in Syria’s northwestern province of Idlib. Turkey borders this province and backs opposition forces in Syria’s nine-year-long civil war. Its armed forces operate in Idlib and are seeking to prevent more refugees from streaming into Turkish territory.

A May 6, 2020, memo by Marta Morgan, deputy minister of foreign affairs, recommends to then-foreign affairs minister François-Philippe Champagne that he permit the export of this Wescam gear to the Turks. In the memo, Ms. Morgan said this represents an “exceptional circumstances” case.

Turkey is an ally of Canada in the North Atlantic Treaty Organization military alliance, but in October 2019 the Canadian government halted the approval process for new export permits to ship military goods to Turkey, citing Ankara’s “military incursion into Syria.” It followed Turkey’s invasion of northeastern Syria in an assault on Kurdish forces.

And in April 2020 Ottawa released a public caution that prospective exporters should assume requests to ship Group 2 military goods – a sprawling category that includes most goods that are considered weapons – would be rejected.

However, Global Affairs pressed Mr. Champagne to allow an exception on humanitarian grounds.

“Based on assurances provided to you by the Turkish foreign minister, [Canadian] officials have assessed that they are intended for use to help protect civilians in Idlib,” the foreign affairs deputy minister wrote.

She raised the spectre of a new offensive by Syrian President Bashar al-Assad against civilians in the northwest Syrian province.

“The potential for a renewed Assad regime offensive on the region carries the risk of dire humanitarian consequences,” Ms. Morgan wrote. “Turkey’s military presence in Idlib may help to deter or delay this eventuality and may mitigate the humanitarian costs if a new offensive is launched.”

Kelsey Gallagher, a researcher with arms control group Project Ploughshares says it’s absurd that Canada first barred arms exports to Turkey back in 2019 over Ankara’s conduct in northern Syria, but then granted military exports again for Turkish operations in the same third country. “Why is that permissible? What is the logic here?” he asked.

The Turkish embassy in Canada could not be immediately reached for comment.