Three Lessons to be Learned from the Treaty of Sèvres 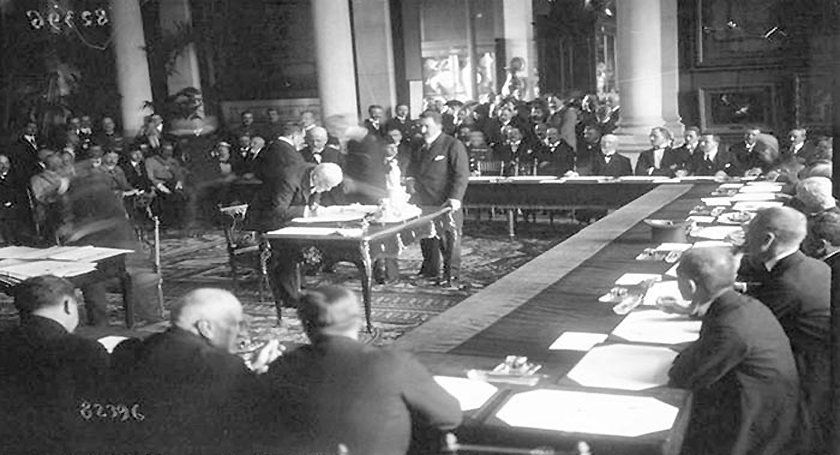 August 10, 2020 marked the centennial anniversary of the Treaty of Sèvres. The Treaty’s life was very short as it was replaced in 1923 by the Treaty of Lausanne. The long-term consequences of this switch in diplomacy has been devastating to Armenians, Kurds and Greeks, and to the global struggle for human rights and preservation of dignity to victims of human rights abuses.

The physical distance between Lausanne and Sèvres is approximately 500 kilometers. The outcome of the Treaty of Lausanne set Armenians and other minorities of the former Ottoman Empire back nearly five hundred years to the beginning of the colonization of their homeland. The Treaty of Sèvres promised Armenians an independent nation and trials for the Turks responsible for the Armenian Genocide. Without ratifying the treaty, justice for Armenians regarding the Genocide was lost, and they were again without a homeland. Historic Armenia was again under full control of the Turks, and this time the Armenian presence was all but obliterated.

As the education director of The Genocide Education Project, I am tasked with creating ways for educators to teach the Armenian Genocide to their students. In the beginning of every workshop, I discuss the following main goals of genocide education and specifically the Armenian case.

The American fairytale is that when bad things happen justice prevails. This mythical utopian vision is pervasive throughout the American narrative. Like the characters John Wayne played, Americans ride into town and deliver justice. Of course, in the case of John Wayne’s characters, the “justice delivered” glorified the genocide of Native Americans. In much the same way, Americans and Western Europe saved and then abandoned the Armenians.

The reality was that Americans worked tirelessly to provide aid and charity to the Armenians of the Ottoman Empire for decades. What they did not provide was consistent political support to save the Armenian nation. Some of Woodrow Wilson’s closest advisors were both businessmen and philanthropists who provided charity to Armenians in the Ottoman Empire as an expression of their Christian faith. As businessmen they saw the crumbling empire as a treasure trove of raw materials including oil, copper and silver that they could control with the right political finesse.

Dr. Stephen Wise, a staunch advocate for the Armenian Case, wrote in May 1923, two months before the signing of the Treaty of Lausanne:

We are mute in the presence of the immeasurable woe of Armenia and we threatened to become vocal about advantages, commercial and industrial, which are to accrue to a group of American money-makers. Armenia must be sacrificed, but the Chester claims must be saved.

By 1923, Americans turned their backs on the Armenians as they saw the opportunity to add to their wealth and international power. Helping Armenians was the first international human rights effort supported by Americans. They set a tone for humanitarian work that still persists today: Provide aid until economic opportunities arise or when economic interests are involved.  Fighting for justice may require personal sacrifices to be made. The gain of helping others achieve justice should far outweigh lining the coffers of the elite.

Denial continues when perpetrators have never acknowledged their responsibility for the crime they committed. As Armenians are reflecting on the injustices dealt to them 100 years since the signing of the Treaty of Sèvres, Turkey maintains they were and are the victims of the Treaty.  Known as the “Sèvres Syndrome,” the Turkish government regularly notes they were forced to extreme nationalism in order to protect themselves from the harsh “punishments” inflicted upon them by Europe and the US at the end of World War I. With the overturning of the Treaty of Sèvres, Turkey faced no significant consequences for the Armenian Genocide.

This tactic of painting oneself as the victim is a classic aspect of denial. Emboldened by a lack of repercussions, Turkey continually seeks new ways to destroy the Armenian people.

This year Turkish President Recep Tayyip Erdogan again used the Treaty of Sèvres as a divisive tool to foster deep-rooted hatred against the West and to promote the concept that Turkey is not the perpetrator of human rights abuses and genocide but instead the victim of slander campaigns. One example of this vicious ideology was the conversion of the Hagia Sophia into a mosque for worship on the 97th anniversary of the Treaty of Lausanne. Hagia Sophia was built as a Christian cathedral approximately 1,500 years ago. After the Ottoman conquest of 1453, the church was used as a mosque by the Ottomans. As a part of Ataturk’s desire to gain a closer relationship with Western Powers, he allowed for the Hagia Sophia to become a UNESCO World Heritage Site and a museum in 1934. Now, Erdogan has added the erasure of the rich history of the Hagia Sophia to his list of ways to eliminate any mention of non-Turkic claims to its historic land.

This summer, we all witnessed and many of us participated in civil rights protests across the world. After the death of George Floyd on May 25, people of all backgrounds took to the streets demanding change in the US and in their own countries. The systematic oppression of African Americans hit a nerve and many took a stand. This is not a new movement, but a continuation of the ongoing struggle for civil rights in the United States. Armenians are well aware of the steps that need to be taken for African Americans to get justice because they are comparable demands to those that would bring a measure of justice to address the crimes and damages of the Armenian Genocide.

Acknowledge the crime, prosecute those who are guilty, receive reparations and see that policies are put into place that support the aforementioned acts and prevent future injustices. These are the core components for gaining justice. The Treaty of Sèvres was the policy piece that would bring justice to Armenians.

The dissolution of the Treaty of Sèvres and the adoption of the Treaty of Lausanne left Armenians and Kurds without justice. The aftermath has been brutal for both, and bloodshed and human rights abuses at many levels have yet to cease a century later. This is just one of so many historical examples that can be applied to the case for civil rights in the United States. The results are all similar. When minorities are oppressed and justice is denied, societies are unhealthy. Democracy cannot thrive, and human rights for all are hindered when the oppression of any group is allowed. The United States is at a turning point in history. One hundred years ago, they turned their backs on the Armenian Cause. Will the United States find its way to providing a just life for all members of its society today?

Sara Cohan is the grandchild of an Armenian Genocide survivor and Education Director of The Genocide Education Project. She was a high school teacher, a fellow at the US Holocaust Museum and the Southern Poverty Law Center and has researched, written and worked in the field of human rights education for more than 25 years.