The making of the “Revolution” 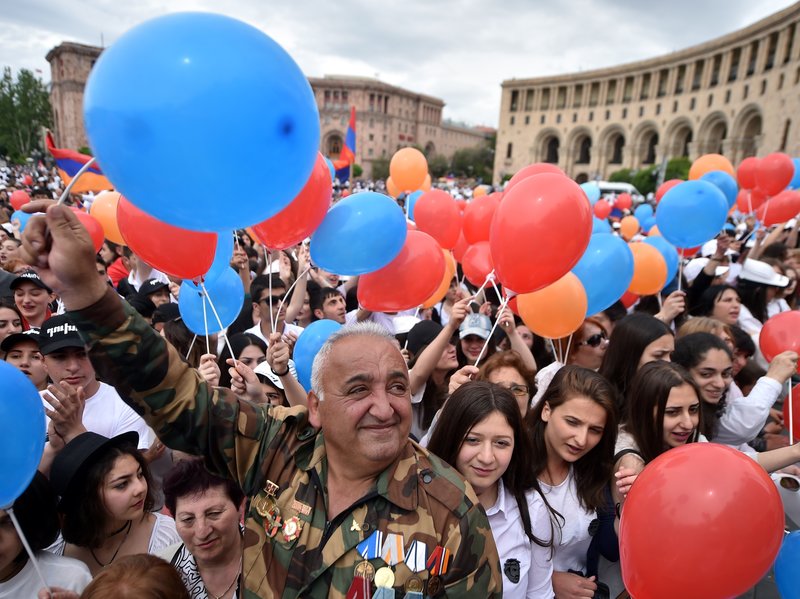 A year ago, we were told that we, the Armenian People, turned a black page in the history of our Third Republic. Since October 2018, we can state that the People has unconsciously endangered the sovereignty of the Republic.

I am not talking about the sovereign power to elect a leader of the government or to elect representatives in the National Assembly through “free” and “democratic” elections, but I am talking about the very sacred national and international sovereignty of a State. The same sovereignty that once held, more than a year ago, a balance of power between the world’s biggest superpowers, as in the White House and the Kremlin, and a socioeconomical integration balance between the West and the East, as in between Brussels and Moscow.

One year ago, one question that we all missed to answer because of a dominant sociopolitical euphoria in-and-out the mass media that constantly turned around the leader of the “revolution”, Nikol Pashinyan, was to understand the main figures of the incoming political class and the new appointees of the future executive branch of the Pashinyan government. Once we have that answer, can we consider the revolt of the People as an independent and a popular uprising?

Since the proclamation of independence in September of 1991, Armenia, like many other ex-soviet States, has been at the center of an unprecedented phenomenon: the globalization of world politics. The end of bipolarized relations attracted unipolar interstate relations in which the theorists of institutional neoliberalism and the great defenders of cosmopolitan democracy saw an open door in a new strategic region to covet: the former Soviet bloc.

1991 & the phenomenon of globalization

Firstly, institutional neoliberalism is based on a set of rules and regulations with a transnational scope in which their political motives and objectives are also transnational. Neoliberalism, since the end of the Cold War in 1991, tended toward a centralization process of human societies on a global scale, or in other words, it’s a process of harmonization and institutional convergence in which the struggle, led interpedently between States, is against a common threat to the world order.

Secondly, cosmopolitan democracy relies on the thesis “[…] that globalization results into a post-Westphalian order”. With the end of the Cold War, the new world order faces inequalities and injustices that require new solutions such as major democratic reforms that gets through a “democratization process of global governance system, in order to shelter the vulnerable from transnational disorder”. This new order, according to cosmopolitans, has reduced the political weight of the State, as the main actor on the political scene, and thus has undermined the national sovereignty of this classic actor also called the Nation-State: “the old binary opposition between the external (international) and the internal (national) can no longer be credibly sustained.”

The phenomenon of globalization & Armenian CSOs

This is how intra-state actors have grown in numbers inside the political environment in each of the post-Soviet States, including Armenia. As a result, the State loses its predominant role in the political spectrum and will have to pave the way for non-state actors such as the civil society organizations (CSOs). Hence, CSOs in Armenia, which do not pursue national or international goals, but rather transnational objectives, are entirely financed by major supranational organizations, for example, the different bodies of the European Union, the National Endowment for Democracy, the European Endowment for Democracy or by private funds, like George Soros’ Open Society Foundation.

These new actors have clear and established goals for more than two decades. In the name of Human rights, socioeconomic equality, rights to education and the Rule of law, these non-governmental organizations are presented as promoters of Western democracy, ready to contribute to any civil societies or activists inside these “new-born” democracies of Eastern Europe in order to bring the necessary domestic reforms… In one word, these NGOs have fixed interests and are trying their best to realize their specific objectives. The most recent examples of their “achievements” are in North Africa, the Middle East (the “Arab Spring” movement), Europe (Ukrainian and Georgian revolutions), Asia (the Republic of China – Taiwan –, Honk Kong Administrative Region) and of course, all the “color revolutions” in the early 2000s.

For almost a decade, the presence and the influence of these non-state actors have increased in Armenia. Since then, the local civil societies counterbalance the decisions of the Armenian government officials and the Armenian legislators. Nikol Pashinyan has, in his political party and on its board of Trustees, members of various NGOs (funded by Washington and Brussels) who share a broad vision of institutional neoliberalism. Therefore, it’s not a secret that the majority of the current government has, in a recent past, been member of russophobic, europhile and neoliberal interest groups (civil societies, professional associations, research institutes or think tanks): lobbyists who, in the name of gender equality, are fighting against traditional values and institutions of the Republic, such as the Family and Apostolic Church (who are deeply enshrined in the Constitution); interest groups that, in the name of democracy, in the name of anticorruption and in the name of “sovereignty”, openly militate against Armenian-Russian strategic and political-economic relations.

This is where we are today. Yes, the various pro-Western NGOs and their local partners had a sacred role during the “revolution” in April-May 2018. This fundamental change is the result of ten years of civil activism with the collaboration of US federal agency USAID, the Foreign Services of the United Kingdom, Germany, the Czech Republic, France, the Netherlands, Sweden and other European States, major grant-making organizations in Brussels and Washington, and with help of major philanthropists like George Soros’ foundation, to name a few of them.

With the violent globalization of world politics since 1945, the American soft power has evolved its means of coercion while keeping the same political doctrine: the Truman doctrine and the Marshall plan of the post-war period, which were meant to preserve the “sovereignty” of the “free” world against the communist threat by attributing a financial, political and economical aid to the liberated States so they could rebuild their democracies and avoid any penetration of new red-commie revolutionaries, and which was basically a containment policy pushed by the political elite to diffuse the “American Way of Life” in the new European sphere of the post-war period, turned, in this new century, into some “promotion agents” (USAID/National Endowment for Democracy) created by public institutions to project American democratic values. Others, like the Carnegie Endowment for International Peace, the Freedom House, the Atlantic Council, the Ford Foundation, the Rockefeller Brothers Fund, are supported and, in some cases, created by individuals who are closely linked to the “neoconservative” establishment in Washington.

Naturally, the legitimacy of this “revolution” is called into question. Is it just another “color revolution” pushed by and openly payed by anti-Russian NGOs in the West just like it was the case in Georgia in 2003/2008, in Ukraine in 2004/2014, in Kyrgyzstan and Belorussia in 2005? To answer this question, how can we ignore the public statements from the Assistant of the U.S. Secretary of State about the evolution of the activities of non-state actors, like the local civil society organizations, since the mass riots of 2015 (#ElectricYerevan)? How can we not take into consideration the multiple meetings between high-ranking experts of these mega-NGOs and the Prime Minister himself or other ministers of the Government, like it was the case with the Justice Minister in July 2019? How can we ignore the content disseminated by these local Armenian civil societies in which we can see a partisan line and a colorful doctrinal position, and which members of the current Government have, since the #ElectricYerevan movement, actively demonstrated their civic activism?

Yes, today our sovereignty is threatened by supranational actors. As Aron Raymond explains in his book Peace and War Between Nations (Paix et Guerre entre les Nations, Paris 1962), “sovereignty can be considered as the foundation of both intrastate and intestate order”. As a result, when civil society organizations, as social actors in the State system, are fully funded and supported by foreign powers, the intrastate sovereignty is threatened, as these actors are fighting against the vital interests of the Nation-State, of the Armenian Nation and are serving the pure interests of foreign governments and not the solemn interests of the Armenian State. As a consequence, under the new Pashinyan regime, these two orders are seriously questioned and the “status quo” inside the society is destabilized.

Aram Shoujounian is Bachelor student in International Studies (specialized in Peace & Security studies) at Université de Montréal. In the previous schoolyear, he was the External Vice-President of the Armenian Student Association of Université de Montréal and of CAQ-UdeM, He’s interested in the Syrian war, especially the role of the foreign actors and their interference inside the conflict. He graduated Social Science (international relations and international law) from the College Bois-de-Boulogne and he finished his secondary school at Sourp Hagop Armenian School in Montreal.