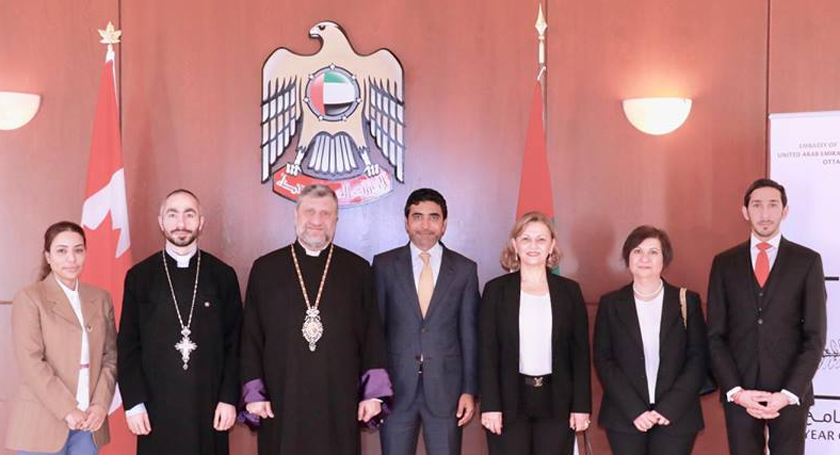 The UAE government announced that 2019 will be officially proclaimed the “Year of Tolerance” to strengthen the nation’s role of encouraging stability and prosperity in the region. The announcement came days after it was revealed Pope Francis will visit Abu Dhabi in February, a sign that the UAE is welcoming and tolerant of all religions.

His Eminence congratulated the Ambassador and wise leaders of the United Arab Emirates on this vital initiative, and both dignitaries discussed the possible collaboration for instilling values of tolerance in the youth to make an impact for stability and to promote acceptance and human values across Canada.

Prelate Tcharian was the first pastor appointed in UAE back in 1993, and was present at the consecration of the Armenian Churches in Sharjah and in Abu Dhabi.

His Eminence was accompanied to the visit with Very Rev. Father Vartan Tashjian, member of the Prelacy religious council, Mrs. Dania Ohanian, Executive Director of the Prelacy, and Mrs. Silva Toutikian, the coordinator of the meeting between the Prelate and the Ambassador.

Archbishop Papken thanked Ambassador Al Raqbani for the meeting and they discussed possible collavoration opportunities, which can further tolerance amongst religions.