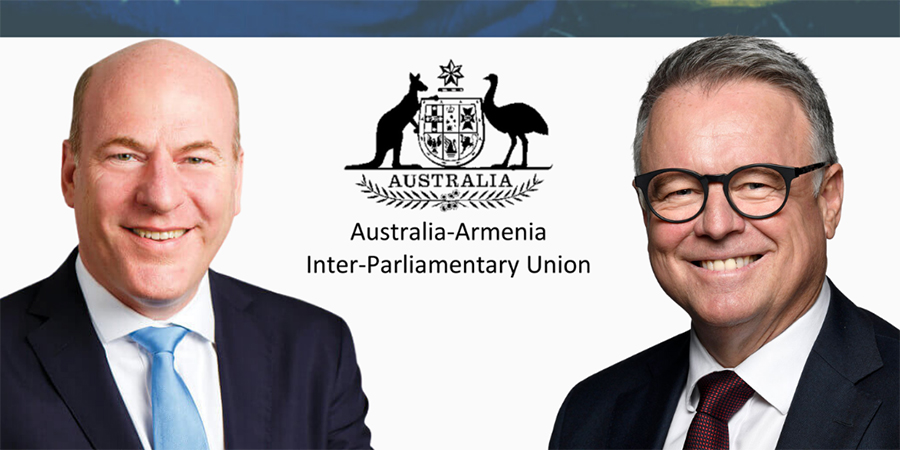 CANBERRA: The co-convenors of the Australia-Armenia Inter-Parliamentary Union (Friendship Group / Caucus), Trent Zimmerman MP and Joel Fitzgibbon MP called on Azerbaijan to stop its attack on Armenia and Artsakh, while sending a thinly-veiled message to Turkey for their active involvement, reported the Armenian National Committee of Australia (ANC-AU).Member for North Sydney Zimmerman –who Chairs the Australian Parliament’s House of Representatives Committee on Health, Ageing & Sport – and Member for Hunter Fitzgibbon – Australia’s former Defence Minister and current Shadow Minister for Agriculture & Energy – released their statement after becoming aware of escalation in the region of Nagorno Karabakh on Sunday, which saw Azerbaijan launch large-caliber air and artillery strikes on many civilian towns of the Republic of Artsakh, including the self-determined Republic’s capital Stepanakert.The attacks have so far killed 85 Armenian servicemen defending their indigenous homeland, as well as civilians and volunteers, with hundreds of others wounded. Many hundreds of Azerbaijani soldiers have also given their lives due to the aggression initiated by their authoritarian leader, Ilham Aliyev, whose attacks on Armenians have now stretched to Armenia’s sovereign borders, including fire from a Turkish military jet on Tuesday.The statement by Zimmerman and Fitzgibbon, who are both members of the Australian Friends of Artsakh network, read: “We urge Azerbaijan to work through the Minsk Group rather than through military action to resolve disputes with Armenia.”“We are equally disturbed of reports that other neighbouring nations are providing military support to Azerbaijan which can only serve to worsen the conflict and the loss of life.”Public support for Armenia and Artsakh has been in from Australian politicians at all levels of government and public figures, including from New South Wales Member for Prospect Hugh McDermott MP, who wrote a scathing letter to the Azerbaijani Embassy in Australia (click here for more), NSW Legislative Assembly Speaker Jonathan O’Dea MP expressing his solidarity with the Republic of Artsakh and Northern Beaches Councillor Vincent De Luca and media broadcaster Jon Dee doing the same.