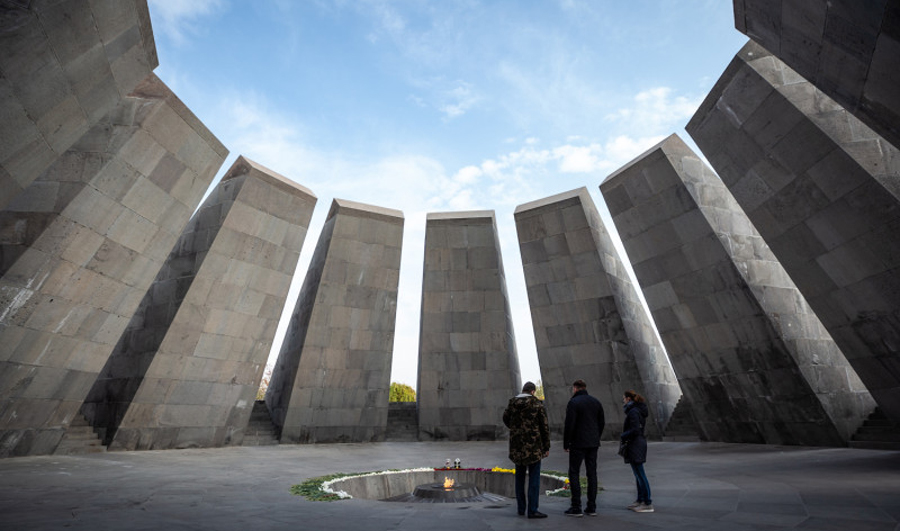 Both Armenians and Jews have been the victims of premeditated mass murder. The Israeli government must put justice before political expediency and call the crime by its name.

Yossi Melman is an Israeli journalist who specializes in security and intelligence matters and the co-author of Spies Against Armageddon: Inside Israel’s Secret Wars.

Walking atop Tsitsernakaberd Hill overlooking the Armenian capital of Yerevan, one can see the striking similarities to Jerusalem. The view resembles that from Yad Vashem, the main Israeli memorial site that honors and commemorates the 6 million Jews who perished in the Holocaust.

At Yad Vashem, also located on a hill, there is the “Avenue of the Righteous Among the Nations,” where trees have been planted to commemorate gentiles who saved Jews. In Yerevan, foreign leaders and other dignitaries are also asked to pay respect to the memory of those who died by planting trees.

Tsitsernakaberd (which means “swallows’ fortress”) hosts the central memorial monument to the 1.5 million Armenians who died as a result of the Ottoman Empire’s premeditated decision during World War I to harass, arrest, and eventually deport them to the Syrian Desert to let them die.

The 144-foot-tall monument is meant to symbolize rebirth. Twelve slabs form a circle that represents the parts of Armenians’ historical homeland in present-day Turkey, and an eternal flame dedicated to those killed during the Armenian genocide lies in the center of the circle.

After the war, during the short-lived first Armenian Republic, assassins volunteered for Operation Nemesis. Its aim was to avenge the deaths of their people by killing Turkish ministers and generals who were responsible for the genocide. Among those assassinated were the “Three Pashas”: the war minister, Ismail Enver; the interior minister, Mehmed Talaat; and the navy minister and governor of Syria, Ahmed Djemal.

More than 20 years later, after World War II, Jewish fighters known as “The Avengers” also decided to take revenge and devised a plan to kill German SS officers responsible for murdering Jews during the Holocaust. They planned to poison German drinking water and bakeries. (Dozens of Germans were killed, but the poisoning plans failed.)

Despite the shared experience of genocide, Israel and Armenia are worlds apart today.

Israel has consistently refused to acknowledge that what happened to the Armenian people was a genocide. This decision doesn’t derive so much from a desire to monopolize victimhood and portray the Holocaust as a unique and unparalleled historical event. It is primarily a cynical political ploy.

For many years, Israel feared Turkey’s wrath if it recognized the genocide. Since the late 1950s, Turkey had been a strong strategic ally of the Jewish state—one of its only friends in the Muslim world. There were close ties between the two nations’ intelligence and security establishments, and Turkey was an important and lucrative market for Israeli weapons. Whenever Israeli parliamentarians, human rights activists, and historians called for recognition of the Armenian genocide, the initiative was blocked by the government. Regardless of their ideology and political orientation, consecutive Israeli governments, knowing that any change of heart and policy would anger Turkey and jeopardize arms sales, placed economic interests before universal values. They agreed to define the genocide only as a “tragedy.”

But in the past decade, relations between Turkey, under the leadership of Recep Tayyip Erdogan, and Israel have deteriorated. Arms sales were halted, and the clandestine intelligence cooperation aimed against the mutual enemy—Syria—was terminated. Nowadays, with Turkish-Israeli political and military relations at a new low, Israeli Prime Minister Benjamin Netanyahu and his son Yair regularly exchange nasty verbal blows over Twitter with Erdogan, calling each other “tyrant,” “murderer,” and more.

Yet Israel remains adamant in its refusal to recognize the Armenian genocide. These days, there is a new excuse: Azerbaijan, which between 1991 and 1994 lost a large chunk of territory to Armenia. Azerbaijan, a Muslim country with a predominantly Shiite population, needed to upgrade its military forces. It turned to Israel, which gladly agreed to sell its advanced military hardware to a new and promising market bordering Israel’s archrival Iran. At the beginning, the ties were secretive. Israeli military censors suppressed domestic media efforts to publish details about it.

However, Azerbaijani President Ilham Aliyev—who has been widely criticized for his corruption, abuse of power, and human rights violations—revealed the secret. In December 2016, while hosting Netanyahu, he said in a press conference that his country was purchasing $5 billion worth of Israeli weapons. To a certain degree, Azerbaijan has replaced Turkey as a market for Israeli military hardware.

The arms deals have included drones, missiles, radars, artillery, boats, and intelligence equipment, which is also used to spy on Aliyev’s rivals and Azerbaijani dissidents. An Israeli company upgraded a private jet for Aliyev and had another one built for him. It also helped build an underground command and control center in the capital, Baku. Some of the Israeli military technology, especially drones and artillery shells, were used against Armenian troops in skirmishes between the two enemies. “For Israel, it’s just a trade, but for us, its death,” Armenian Foreign Minister Zohrab Mnatsakanyan told Foreign Policy.

In return, Azerbaijan sells oil to Israel and allows Israeli intelligence agencies to use its soil as a launching pad for operations against Iran. Now, Netanyahu, who was re-elected this month for his fifth term as prime minister, fears that acknowledging the Armenian genocide would cause Israel to lose the revenues from the Azerbaijani market and that Aliyev, who is also a good friend of Erdogan’s, might put an end to the Israeli intelligence presence in his country.

It’s even more shameful because it comes from a nation that was built on and has risen from the ashes of genocide.

Too often, the memory of the Holocaust has been used as an instrument of policy, not a moral compass. After the collapse of the Soviet Union and communism, the Baltic states and several Central European countries embarked on the path of historical revisionism and celebration of local anti-communists, who had collaborated with the Nazis in killing Jews during World War II. Yet Israeli governments largely turned a blind eye and chose trade deals and military cooperation over morality. Even Yad Vashem barely protested.

Netanyahu’s right-wing government is now going the extra mile. Purely to enhance Israel’s diplomatic standing and economic position, Netanyahu has allied his government with right-wing populist governments in Hungary and the Czech Republic, ignoring the fact that they are supported by anti-Semitic nationalists. Whenever there is an anti-Semitic incident, even a minor one, in Western European democracies, the prime minister and his aides raise hell and call on European Union governments to take action against the perpetrators. But they stay mostly silent when similar incidents occur in Donald Trump’s America or in Eastern European countries led by allies such Viktor Orban in Hungary.

Poland offers another example of the Israeli double standard. Last year, Netanyahu accepted with hardly a hint of protest a Polish law that sought to punish any person who blames Poles for participating in the Holocaust. Only a public outcry forced him to modify his position, which led to an Israeli-Polish diplomatic crisis that remains unresolved.

It is past time for Israel to stop its evasive language about Armenia in the service of crude economic interests. A genocide is a genocide. It is Israel’s moral obligation to humanity, and to the memory of the 6 million Jews murdered in the Holocaust, to recognize the Armenian genocide, just as it has recognized the Rwandan genocide.