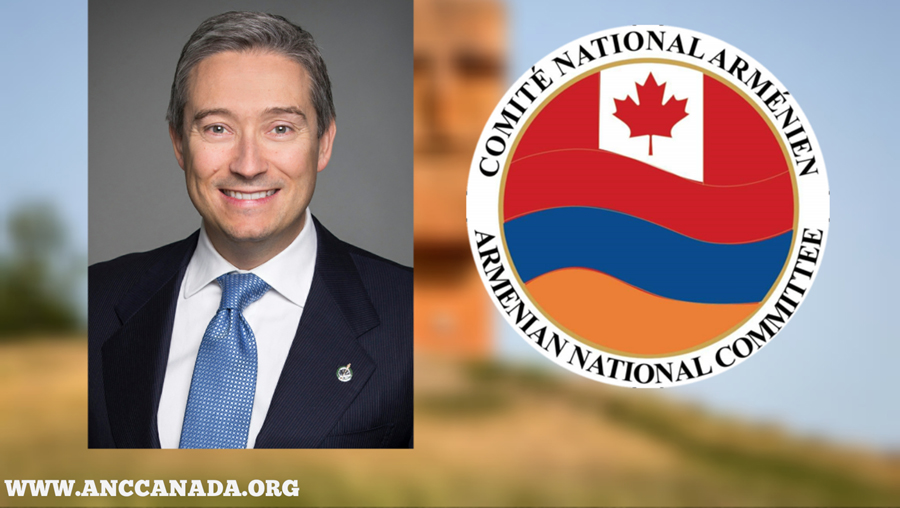 (OTTAWA) – In a letter addressed to the Armenian National Committee of Canada (ANCC) on May 4th, Canada’s Minister of Foreign Affairs, the Hon. François–Philippe Champagne clarified Canada’s position on Artsakh, reported the ANCC.

Contrary to the diplomatically irresponsible and one-sided tweet published by the Canadian Embassy in Ankara, following the General Election held in the Republic of Artsakh on March 31st, Minister Champagne clearly stated that Canada fully supports the OSCE Minsk Group Process, the peaceful resolution of the conflict and the principle of self-determination – amongst others – as outlined in the Helsinki Final Act.

“While I regret any concern that this tweet may have caused the Armenian National Committee of Canada and the Canadian-Armenian community, I would like to reassure you that there has not been any change to our long-standing position on Nagorno-Karabakh” said the minister in his letter.

“We are satisfied to see that the Minister has restored the balance vis-à-vis Canada’s position on this issue of paramount importance to Armenian-Canadians, effectively overriding the lopsided and foreign-influenced tweet published by the embassy in Ankara” said Hrag Tarakdjian and Shahen Mirakian, co-presidents of the ANCC.

“The position of Canada remains based on our strong and consistent support for the Organization for Security and Co-operation in Europe (OSCE) Minsk Group’s work toward a negotiated solution, and our position does not prejudge the outcome of this process. Canada agrees with the Minsk Group that there can be no military solution to the conflict and that any resolution must take into account the Helsinki Final Act. We want peaceful societies, and we will support the solution, when achieved.” Concluded the minister in his letter addressed to the ANCC.

“There is still a lot more that needs to be done on this issue and the ANCC will continue to stand at the forefront and work with our government to ensure that the fundamental human rights of the people of Artsakh are protected and upheld” concluded Tarakdjian and Mirakian.

On April 3rd, the ANCC forwarded a letter to Minister Champagne, raising serious concerns regarding the tweet, asking for its retraction and for the Minister to recall the ambassador for his irresponsibility and inability to uphold Canada’s balanced foreign policy.