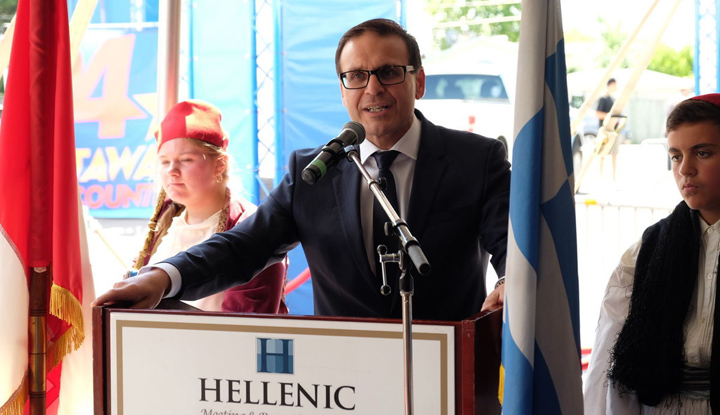 During a recent speech in the Canadian Senate, Greek-Canadian Senator Leo Housakos addressed his colleagues in efforts to bring to vote the need for Canada to recognize the Genocide of the Pontic Greeks from 1916 to 1923 by Turkey.

ccording to transcripts published on protothema.gr, Senator Housakos recently presented the “Motion to Call Upon the Government to Recognize the Genocide of the Pontic Greeks and Designate May 19th as a Day of Remembrance” calling on the government of Canada to “(a) recognize the genocide of the Pontic Greeks of 1916 to 1923 and to condemn any attempt to deny or distort a historical truth as being anything less than genocide, a crime against humanity; and (b) to designate May 19th of every year hereafter throughout Canada as a day of remembrance of the over 353,000 Pontic Greeks who were killed or expelled from their homes.”

It started in 1913, when Turkish soldiers in the Ottoman Empire began singling out all able-bodied Greek men, conscripting them into battalions to perform slave labour in the Empire’s war effort. They stole Greek children and forcibly assimilated them into Turkish society. They plundered and terrorized Greek villages under the pretext of internal security.

As with the Armenians, Greeks were generally accused of being a disloyal and traitorous “fifth-column” within the Ottoman Empire, in this case due to continual tensions and conflict with the relatively newly-independent Greek state just across the Aegean Sea. Eventually, most of the population was rounded up and forcibly deported to the interior.

There is no doubt these actions fit the legal definition of genocide in Article 2 of the United Nations Convention on the Prevention and Punishment of the Crime of Genocide. Indeed, those same actions against Armenians have been recognized by Canada and others as genocide.

However, while the Armenian Genocide (1915-1917) is widely known and acknowledged, the Pontic Genocide, which occurred at the same time, remains obscure. It is time for that to change in Canada, as it has elsewhere.

Prior to the First World War, 700,000 Greek Orthodox lived, as their ancestors had for millennia, lived in the Black Sea region of the Ottoman Empire, otherwise known as Pontos.

But in the midst of the Ottoman Empire’s 20th century collapse, both during and immediately after the First World War, Ottoman Turks sought to guarantee their sovereignty over the Anatolian Peninsula by forging a ‘modern’ nation-state. For them, this meant a forced homogenizing — or ethnic cleansing — of the population by displacing religious and ethnic minorities such as Christian Greeks.

The genocide would go on to include indiscriminate murder, mass rape, wonton destruction and torture for the sake of torture, regardless of gender and age.

The Ottomans succeeded in killing a significant portion of the Pontic people. The body count of the genocide of the Pontic Greeks was more than 350,000 men, women and children. Three hundred and fifty thousand people out of 700,000 — half the population — exterminated.

We must be clear that this is a tragic fate — a genocide. Not only have the ghosts of the Pontic Greek Orthodox earned the right to confront their murderers, but to paraphrase the words of a wise man, those who forget the tragedies of the past are doomed to repeat them in the future.

And indeed, the world chose to ignore the genocide of Armenians and Pontic Greeks, and we were forced to confront the Nazi Holocaust of European Jews as a result. We ignored Rwanda and are now dealing with genocides like that of the Yazidis being carried out by Daesh (also known as the Islamic State).

This is why I am supporting a motion in the Senate to recognize the genocide of the Pontic Greeks, to condemn any attempt to deny or to distort the historical truth of this crime against humanity and to designate May 19 as a day of remembrance for the Pontic Greeks who were killed or expelled from their homes.

As the upper chamber of Parliament, the Senate of Canada is ideally situated to lead the way in taking a principled stand in recognizing the Pontic Greek genocide.

In asking Parliament to recognize the Pontic Greek genocide, we aren’t asking Canada to sit in judgment of others.

On the contrary, it is about acknowledging, healing and educating — and in so doing preventing such atrocities from happening again. This has been true for nations that want to be accepted as modern-day democracies. There is perhaps no greater example of this than modern-day Germany, a country which faced its responsibility for the Holocaust with shame and humility.

But Canada also knows this all too well. On June 11, 2008, Prime Minister Stephen Harper formally apologized to Indigenous Canadians for the government’s role in the Indian Residential Schools system, putting Canada on the path toward reconciling its own tragic past with its Indigenous peoples.

Admitting to wrongdoing sometimes takes courage and strength but it shows a willingness to learn from one’s failures. Dark, ugly chapters in our history cannot be denied, especially if, as a nation, one wants to remain worthy of one’s place in the world.

Modern-day Turkey’s unwillingness to even recognize the Christian genocides of the Armenians, the Assyrians and the Pontic Greeks is not becoming of the significant status they enjoy in the international community.

But even if Turkey itself will not recognize these genocides, we as Canadians must stand up and be counted in denouncing genocide, past and present.

Just as we acknowledged our own dark history, we must now recognize the genocide of the Pontic Greeks.

Senator Leo Housakos served as Senate Speaker; he is the Chair of the Senate Committee on Internal Economy, Budgets and Administration and he represents the division of Wellington in Quebec.