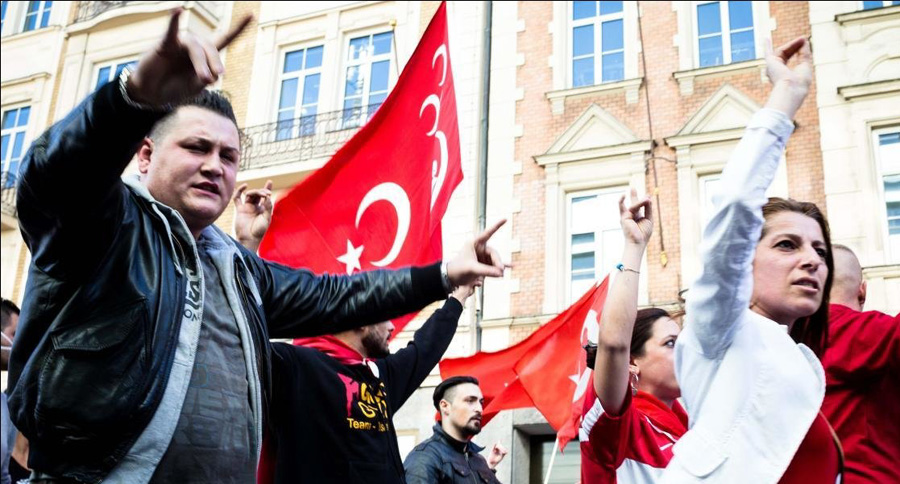 The Austrian Interior Ministry has banned several extremist symbols including those from Turkish ultra-nationalists and the Muslim Brotherhood.

Breibart – In total 13 flags and symbols fall under the new ban including the neo-fascist Grey Wolves from Turkey, the Kurdistan Worker’s Party (PKK), and the Muslim Brotherhood which originates in Egypt, Kronen Zeitung reports.

The ban, which comes into effect on March 1st, extends to anyone displaying the flags or symbols in public and subjects them to a fine of up to 4,000 euros and up to 10,000 euros for repeat offenders.

The plan to ban the symbols was a joint effort between the two parties of the ruling conservative-populist coalition of the Austrian People’s Party (ÖVP) and the Austrian Freedom Party (FPÖ) and comes after extremist symbols of Islamic State and the Al-Qaeda were previously banned.

Exemptions to the ban will apply for those not using the symbols to endorse the groups they represent including use for media, films, exhibitions, and academic use.

While the Grey Wolves have a much bigger presence in neighbouring Germany, Austria has seen clashes between members of the Turkish ultra-right and the country’s Kurdish community as recently as August of 2016 when the two groups attacked each other in the middle of Vienna forcing tourists to flee into nearby shops to escape the violence.

Austria has also taken issue with Turkish supporters of Islamist President Recep Tayyip Erdoğan who took to the streets in Vienna following the failed coup in 2016 and overwhelmingly voted for Erdoğan in last year’s national election prompting FPÖ Vice Chancellor Heinz-Christian Strache to write on social media, “I recommend all the Turks in Austria who voted for Erdoğan should return to Turkey!”

The PKK, while not a major force in Austria, has been allegedly linked to the firebombing of Turkish mosques in Germany. The group is recognised as a terrorist organisation by the UK.