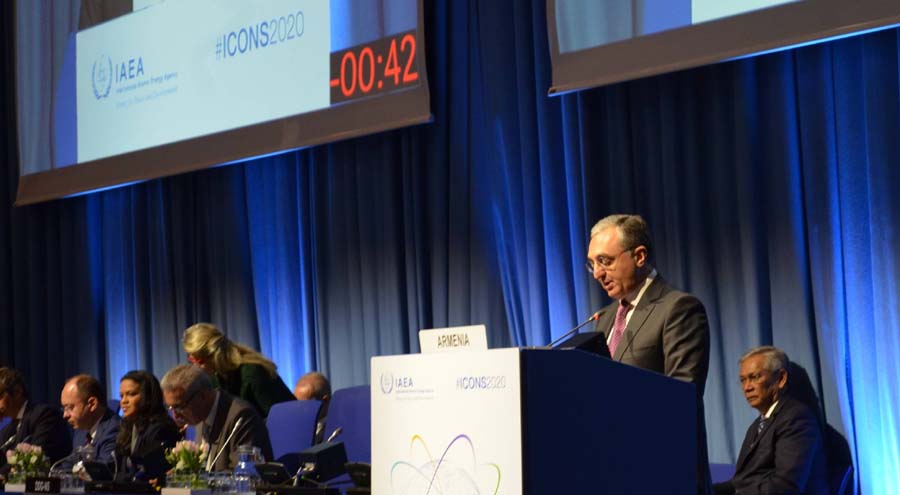 Ministers and other high-level representatives from over 130 International Atomic Energy Agency (IAEA) member states adopted a declaration at a major conference in Vienna to enhance global nuclear security and counter the threat of nuclear terrorism and other malicious acts.

“Nuclear and radioactive material is a magnet for groups with malicious intent that see in this material a possibility to create panic and bring distress and pain to our societies,” IAEA Director General Rafael Mariano Grossi said at the opening of the week-long conference at IAEA headquarters, shortly before the declaration was adopted by the participants.

Nuclear technology and science help improve the lives of millions of people around the world in areas ranging from clean energy and cancer care to food security and pest control, he said.

But the nuclear and radioactive materials used to produce those benefits must be secured at all times to prevent them from falling into the wrong hands, he added.

In the declaration, IAEA member states reaffirmed the common goals of nuclear non-proliferation, nuclear disarmament and the peaceful uses of nuclear energy and recognized that nuclear security contributes to international peace and security.

Armenia attaches great importance to reinforcing nuclear security both at national and international levels, Foreign Minister Zohrab Mnatsakanyan said in an address to the International Conference on Nuclear Security: Sustaining and Strengthening Efforts.

Below is the full statement of Foreign Minister Zohrab Mnatsakanyan

I would like to thank Director General Rafael Grossi for convening the third conference on Nuclear Security in Vienna. I also take this opportunity to extend once again my warmest congratulations on your appointment as Director General of the International Atomic Energy Agency and wish every success in this important and demanding mission.

Allow me to start by paying tribute to the late Director General Mr. Yukiya Amano, whose commitment and expertise over the past 10 years steered the Agency to many remarkable achievements under the IAEA motto expanded on Director Amano’s suggestion Atoms for Peace and Development. In May, 2019 Mr. Amano paid a working visit to Armenia. High level meetings with the leadership of my country became a testimony of fruitful cooperation between Armenia and the IAEA and outlined new directions for our future joint endeavors.

I would like to underscore the unique inclusiveness of this conference, which provides us, the Member States, with an opportunity to share perspectives, challenges, and achievements, to jointly identify the measures which will promote the strengthening of global nuclear security through dialogue and cooperation. I am confident that the Ministerial declaration to be adopted later today will become an important milestone for undergoing efforts of the international community in strengthening the global non-proliferation regime and will demonstrate our shared commitment to maintain high standards in nuclear security regime.

Since the second ICONS in 2016, the world, regrettably, hasn’t become a safer and better place to live. Today, in ever changing world, the global security environment is subject to rapidly evolving threats, such as the threats associated with emerging technologies and cyber-attacks. We do not know, or cannot imagine what and how many new threats will emerge tomorrow, in the foreseeable future. That means the national nuclear security regimes, regulatory systems need to be flexible, adaptable and resilient. The exchange of information, sharing experiences and practices are key prerequisites for timely identifying and addressing the threat. The continuous assistance provided by the IAEA to Member States to enhance their national security regimes is indispensable.

Recognizing that the responsibility for nuclear security within the Member state rests entirely with that State, we have always strongly supported the essential and leading role of the International Atomic Energy Agency in the international nuclear security framework and non-proliferation regime. The peaceful use of nuclear energy is of vital importance for my Government in terms of economic development and energy security.

Armenia attaches great importance to reinforcing nuclear security both at national and international levels through the ratification and implementation of international legal instruments as well as the establishment of robust national legislation related to physical protection and security of Armenian NPP and nuclear materials and rules on physical protection of nuclear installations and nuclear materials. Armenia closely cooperates on a regular basis with the international partners with regard to all nuclear energy issues. Armenia is undertaking necessary measures to enhance and maintain nuclear and radiation safety. We greatly value the role of the IAEA and ongoing support to Armenia in ensuring the highest standards Security of the Armenian Nuclear Power Plant.

In particular, numerous IAEA’s on-site inspections and assessment missions have reaffirmed Armenia’s commitment in implementing its international obligations and the highest level of openness and transparency. No any non-compliance or deviation from the requirements of international treaties has ever been recorded.

Armenia fully implements its international obligations under the UN Security Council Resolution 1540. The National Action Plan of Armenia for 2015-2020 outlines series of concrete steps ranging from reviewing already implemented national measures to the coordination of ongoing and anticipated activities.

We are also actively participating in counter-proliferation initiatives such as Global Initiative to Combat Nuclear Terrorism and Proliferation Security Initiative. The Government of Armenia is continuously working with its international partners at bilateral and multilateral levels to further enhance its national capabilities in countering nuclear smuggling.

We follow with deep concern the developments in our region, and, in particular, the situation with the JCPOA (Joint Comprehensive Plan of Actions on Iran’s nuclear program). The conclusion of JCPOA – a real achievement of multilateral diplomacy – provided world with a critical tool in reducing the risk of nuclear proliferation and we call upon all partners to honor their obligations under the JCPOA, to avoid taking steps that could lead to escalating tensions and do the utmost to preserve the agreement. Armenia welcomes all diplomatic and multilateral efforts to re-start the inclusive and open dialogue on the matter.

We commend the International Atomic Energy Agency team and its leadership for their dedicated, professional and impartial work in verifying and monitoring of Iran’s nuclear related commitments under JCPOA and look forward to continuous cooperation between IAEA and Iran towards implementing the of JCPOA and UN SC resolution 2231(2015).

Flimsy and unjustified charges were made against Armenia and Nagorno-Karabakh by the speaker from Azerbaijan. Those are totally rejected.  The territory of the Republic of Nagorno-Karabakh is under full and legitimate control of NK authorities and nothing indicates to the contrary. NK authorities are open for international cooperation and at any time the Azeri allegations can be easily verified and proven as non-existent.

In conclusion, I would like to reiterate Armenia’s strong commitment to our shared goals of nuclear disarmament, nuclear non-proliferation and peaceful use of nuclear energy and wish every success to the conference.