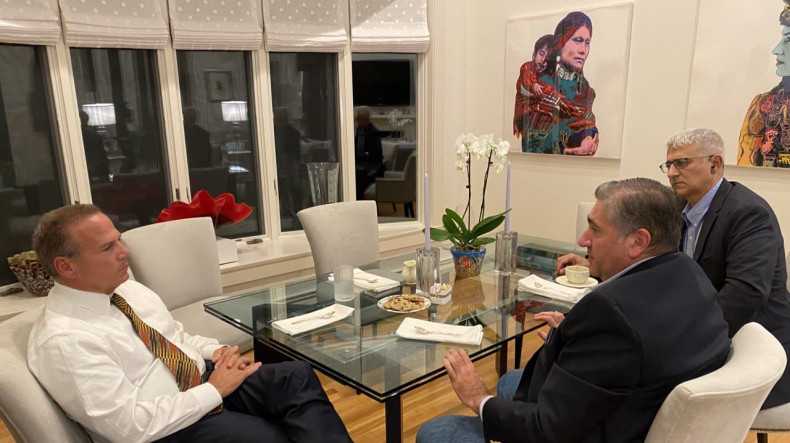 The ARF members thanked Congressman Cicilline for his long-standing support to Armenia, Artaskh (Nagorno Karabakh) and the Armenian cause throughout his long political career as member of the Rhode Island House of Representatives, as Mayor of Providence, and most recently, as and member of the US Congress. Mr. Khachatryan provided first hand updates to the Congressman about the situation in Artsakh and on the border between the Republic of Armenia and Azerbaijan in the wake of Azerbaijan’s attack, war crimes, and ethnic cleansing in the fall of 2020. The member of the Armenian parliament stressed that no just or sustainable peace can be established between the two nations until the rights of the people of Artsakh for self determination are universally recognized and fully respected. “A democratic peace can be established only if justice prevails first. Azerbaijan’s war against Artsakh proves that Artaskh cannot be a part of Azerbaijan”.

While talking about the situation on the border, Mr. Khachatryan mentioned that Azerbaijani military forces have repeatedly invaded the sovereign territory of Armenia and continue provocations along the border. “Armenian soldiers are being attacked and killed – with international impunity- less than 35 miles away from our capital, Yerevan,” he stated.

ARF Bureau member Aram Kaloustian stressed that Turkey and Azerbaijan continue the genocide they began more than a century ago. “Armenia is seen by Turks as a wedge between Turkey and the rest of the Turkic world. This is a leading driver of their relentless campaign to annihilate the Armenian nation. If they are not stopped, the very existence of Armenians upon their ancient, indigenous homeland will be in danger”.

The issue of Armenian prisoners of war was discussed, with ARF Bureau member Kaloustian stressing that: “Over 200 Armenian servicemen and civilians continue to be held abused and extrajudicially executed by Azerbaijan – despite the November 9 agreement which stipulates an all-for-all exchange of the POWs.”

“Azerbaijan, in spite of mounting U.S. and international calls for the immediate and unconditional return of all POWs, continues to uses prisoners as hostages to secure additional concessions from the Armenian side,” concluded Kaloustian.

The ARF Bureau member raised his concerns regarding with the U.S. government waiver of Section 907, which opens the door to additional multi-million dollar military aid packages to Azerbaijan – which has demonstrated time and again that it will use all the resources at its disposal to attack and kill Armenians.

In his turn Congressman Cicilline thanked the ARF members for bringing each of these issues to his attention and pledged his full support and assistance to the Republics of Armenia and Artsakh.