The Geopolitical Background of Azerbaijan’s Aggression on Armenia 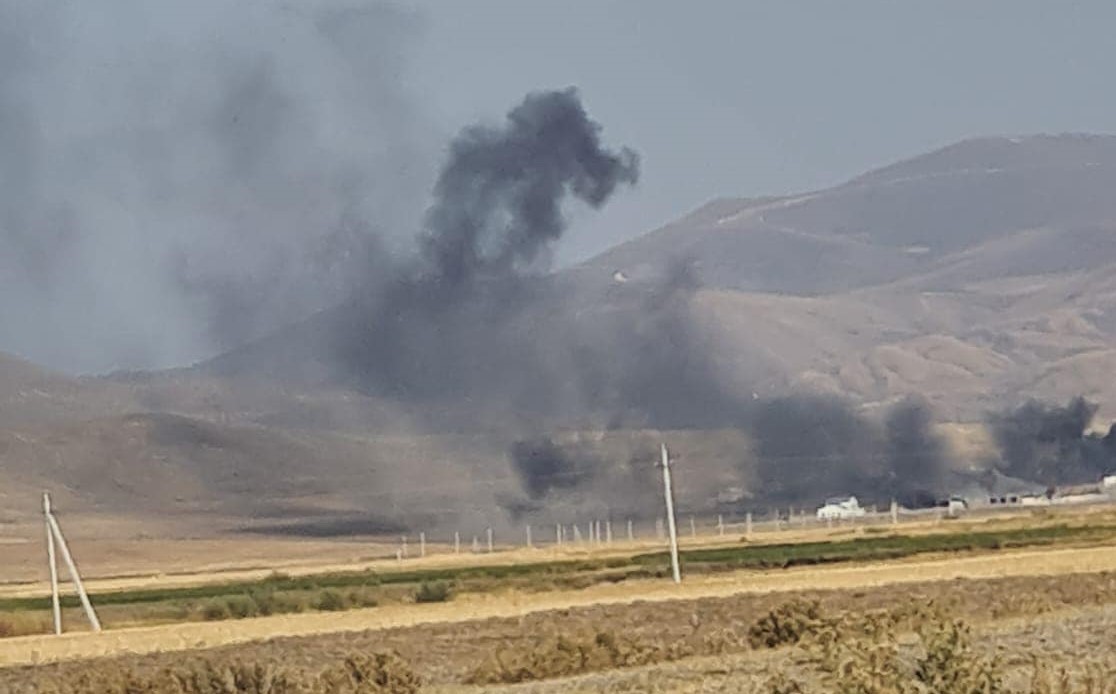 Last week’s aggression by Azerbaijan on Armenia should be viewed from a regional lens, as the conflict imposes a new geopolitical reality not only on Armenia, but also Iran and the wider South Caucasus.

On September 10, 2022, the Defense Minister of Azerbaijan instructed his army to maintain combat readiness to “suppress any Armenian provocations.” Not surprisingly, three days later, Baku launched a full-scale aggression on Armenia’s eastern border, concentrating on Jermuk and using special forces, Israeli and Turkish-made drones and artillery strikes against military and civilian targets. Consequently, Azerbaijan occupied strategic positions near the border, exerting pressure on Armenia’s narrow southern region. The aim of this military operation was to enter Jermuk and force the authorities of Yerevan into another “capitulation.” Azerbaijani artillery strikes also targeted Russian border guards and their posts in the region of Gegharkunik. Interestingly, the Russian personnel didn’t respond militarily and were urgently forced to leave the place of deployment as their military equipment and facilities came under intense fire.

Azerbaijan justified its aggression by accusing Yerevan of refusing to sign a peace treaty that would recognize its “territorial integrity” (that is, recognizing the territories of Nagorno-Karabakh where Russian peacekeepers are currently deployed as part of Azerbaijan) and provide a “corridor” in the south connecting Azerbaijan to its exclave Nakhichevan. As a result of the escalation, Armenia’s Security Council announced on September 19 that a total of 207 soldiers and civilians were killed or went missing— including three killed and two missing civilians.

The escalation was necessary for the US to come back to the region and exert its soft power on the Armenians and Azerbaijanis to sign a peace treaty, while pushing out Russia and containing Iran in the South Caucasus. The recent aggression should not solely be viewed as a local dispute between two rival states. The conflict also has a regional dimension shaped by current events in Ukraine and around Iran.

This month, Russia has started facing military setbacks in Ukraine, as NATO member countries began sending heavy arms and supplies to Ukrainian forces. As Ukraine targeted the bridges in Russian-held zones and blocked supply routes, Russian forces were forced to withdraw to avoid encirclement. The West and the Ukrainian government welcomed the subsequent capture of key strategic towns by the Ukrainian forces as a tactical victory over Russia. Though such small military operations may not decide the outcome of the war, Russia is currently stuck in the “Ukrainian mud,” and with winter looming, neither side will be able to engage in counter-offensive and major operations, guaranteeing that the war of attrition will continue.

Taking advantage of Russia’s setbacks in Ukraine and the EU’s need for alternative gas supplies bypassing Russia, Azerbaijan engaged in a gas deal with the EU, while continuing to send arms to Ukraine and opening negotiations with Russia to gain an “observer status” in the Russian-led Eurasian Economic Union. Shifts in Russian-Turkish “co-opetition” are also giving Azerbaijan a “free hand” to exert additional pressure on Armenia. While this asymmetric relationship was once in favor of Moscow, it is tipping toward Ankara as a result of the ongoing crisis in Ukraine, Turkey’s increasing tension with the US and the diversification of its energy supplies. Since Turkey perceives itself as an equal partner in arranging regional affairs in Syria, Libya and the South Caucasus, Moscow’s political dependence on Ankara would boost Turkey’s regional position, giving the latter a free hand to test Russia’s “red lines.” Meanwhile, Russian President Vladimir Putin is eager to maintain Turkish President Recep Tayyip Erdogan’s power in Ankara, fearing that the opposition may succeed in ousting him in the 2023 elections and hence torpedoing current regional arrangements between Turkey and Russia.

Turkey’s power relative to Russia is one of the main factors that has handicapped the latter from assisting its only ally in the South Caucasus. Armenia, a member of the Russian-led CSTO alliance, is unable to counter Azerbaijani provocations after its defeat in the second Nagorno-Karabakh War and is under constant fire and pressure from Baku and Ankara.

Moreover, Russia distrusts Armenian authorities. Some Russian experts argue that Yerevan is engaging with the West to sign a “peace treaty” with Azerbaijan that would push Baku to demand the withdrawal of Russian peacekeepers from Nagorno-Karabakh. Yerevan denies such accusations, and many government officials feel neglected by Russia, facing the Turkish-Azerbaijani axis alone.

Iran is being encircled. Will it act?

Iran has occasionally warned Azerbaijan that its border with Armenia is a red line. Tehran has both geopolitical and geo-economic concerns that the loss of its geographical border with Armenia may not only deprive Iran of its transit role connecting Turkey or Nakhichevan to Azerbaijan, but also pave the way for pan-Turkic aspirations and NATO’s expansion in the region.

For this reason, Tehran cannot remain neutral as it sees its northern neighbor crumbling and squeezed between Turkey and Azerbaijan. The loss of Armenia as a deterrent buffer state against the Pan-Turkic project will create tensions in Iran’s northern provinces. From Iran’s perspective, it is no coincidence that the developments in Armenia came after the clashes in Iraq. The Iranians viewed the inter-Shia clashes in Baghdad between Shia cleric and politician Muqtada al-Sadr’s supporters and pro-Iranian factions as an “American conspiracy” to trap Iran. Amid the failure of negotiations on a nuclear deal, there is a clear intention to isolate Iran and push it out of the Middle East. Iran’s silence in the South Caucasus will be translated as a sign of weakness and may have a domino effect on the Middle East.

As the escalation continued, Iran deployed troops and heavy weaponry to its borders with Azerbaijan and Armenia. The Iranian President called Armenia’s PM and reiterated that “Iran’s connection with Armenia should not be endangered, and the communication channels should be under the sovereignty of the states.” After a few days, the head of the National Security and Foreign Policy Committee in the Islamic Consultative Assembly (parliament) Vahid Jalalzadeh warned that “Iran will turn the dream of changing the borders of the region into a nightmare.”

Iran demonstrated a passive view regarding US House Speaker Nancy Pelosi’s visit to Yerevan. However, Moscow’s passive stance towards Yerevan and distrust of Armenia’s “pro-Western” government have led some Iranian newspapers to criticize Russia, arguing that such behavior would lead to the loss of Armenian statehood. It is not surprising that anti-Russian sentiments are rising high in Yerevan, and many are questioning the effectiveness of the Russian-led CSTO military alliance, which has refused to assist Armenia in times of need.

Meanwhile, the United States, taking advantage of this atmosphere, praised “Armenia’s democracy” and sent Pelosi to Armenia in a show of “support for the country.” The US is eager for a diplomatic solution to the crisis, but not necessarily in support of Yerevan. Rather, US officials want to convince Yerevan and Baku to sign a “peace treaty” aiming to push the Russians out of the region. Many experts argue that the US will push for a peace deal between Armenians and Azerbaijanis before 2025, when Azerbaijan will have the chance to ask for Russian withdrawal from Nagorno-Karabakh. The golden question is whether President Aliyev would risk taking such a step.

Remarkably, some Azerbaijani MPs, such as Ziyafat Asgarov and Elman Mammadov, speaking through unofficial channels, as well as Azerbaijani media outlets have called for the establishment of “security zones” and “buffer zones” within Armenian territory. Such remarks should not be missed. The main objective behind this narrative is to disarm the Armenian army and facilitate the establishment of a “corridor” in Syunik.

Azerbaijan is pushing to isolate Armenia and enforce a humiliating treaty. In addition to military operations, Baku is also engaging in psychological and political pressure. On September 19, a group of Azerbaijani politicians and “intellectuals” in Ankara announced the creation of a new “Goycha-Zangezur Turkish Republic.” A representative office has already been opened in Ankara, and a flag has also been presented. The so-called “Goycha-Zangezour” Turkish Republic covers the Southern and Eastern parts of Armenia.

Armenia needs a vision for its survival. It has to seek military support to strengthen its deterrent capabilities, rather than moral support and empty promises. The recent anti-CSTO protests in Armenia are very concerning. Russia should not underestimate them, in order to prevent turning Armenia into another Ukraine. Here, Iran has a crucial role to play in convincing Russia that supporting Armenia is important irrespective of the “provocative” tendencies of Yerevan toward Moscow.

Armenia is once again at the crossroads of great power competition, the only natural wall against the pan-Turkic project. If Aliyev’s and Erdogan’s regional ambitions are not halted now, the fireball will expand in the future to neighboring countries.