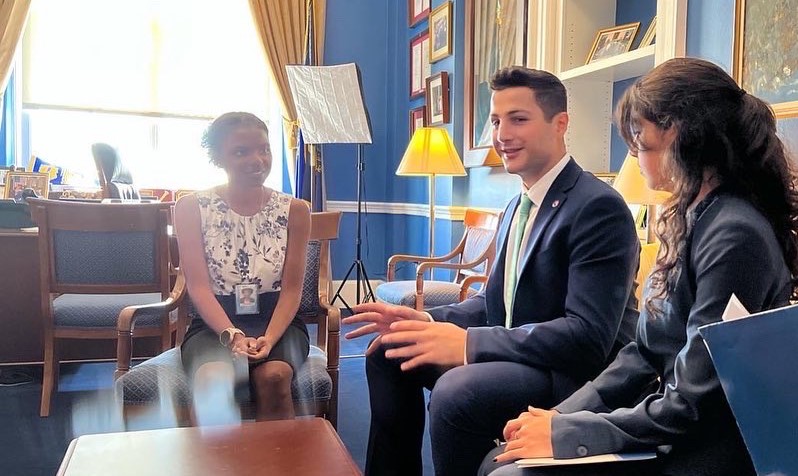 My eyes welled as an overwhelming emotion surged through the crowd and permeated my body. Glaring Times Square billboards seemed invisible behind the sea of tricolor red, blue and orange flags that illuminated the skyline.  Even the surrounding skyscrapers were dwarfed by the unified pride and determination of the rhythmic chants — “We are still here!”

The date was April 24th, 2015, marking the 100th year anniversary of the beginning of the Armenian Genocide. Both sides of my family suffered through the atrocities, including my great-grandmother Rahan who, at just four years of age, suffered through having to bury her decapitated father and starved infant brother on a brutal desert march.

The survivors and their descendants were as scattered embers tasked with reigniting the flame of an ancient heritage that had so nearly been extinguished. From a young age, my grandfather, Krikor Pidedjian, an esteemed musicologist whose long career contributed to furthering the quality of Armenian cultural life and depth of knowledge in Armenian music, instilled in me the importance of my Armenian heritage. One century later, as I stood in Times Square engulfed by thousands of fellow Armenian-Americans with this shared past, with the teachings of my grandfather in mind, I realized the magnitude of my own responsibility to ensure that our ancestors’ sacrifices were not made in vain through preserving our endangered culture.

Carrying this motivation, I completely immersed myself in my Armenian heritage. I ran for vice chairperson of New York’s Holy Martyrs Armenian Apostolic Church ACYOA, where I spearheaded recruitment efforts to engage fellow Armenian youths. In this role, I organized a wide range of activities, including Armenian movies, dancing, and cooking events, doubling the chapter size to over 50 active members. I also instilled cultural awareness in others through working as a volunteer counselor at Camp Nubar which I have attended since I was seven years old.

The Armenian Christian faith, which gave my ancestors the strength to persevere while on the brink of extinction, also grew stronger within me. I have found great fulfillment in connecting with my spirituality through attending Sunday School each weekend. I also engaged fellow youths with our faith by leading spiritual discussions with clergy and volunteering at my church’s bible school.

As a member of the Diaspora, I also feel a duty to support Armenian communities across the world who, over a century later, still feel the effects of 1915. I organized large-scale fundraisers with my church youth group, including hosting Armenian luncheons, baked goods and apparel sales, auctions, and car washes. Over the course of five years, we raised over $10,000 to aid the Diaspora, including persecuted Armenians in Syria and under-resourced orphanages in Armenia that are not so different from those my great-grandmother once depended on for survival.

As I reflect on my experiences within the Armenian community, I am proud of the moments I have shared with fellow Armenian Americans. Yet, I have come to learn that there is often a lack of strong nationalistic sentiment among Armenian Americans. With our aggressors pursuing pan-Turkism and the current precarious situation in Artsakh, it is more important than ever for Armenians around the world to have a strong sense of patriotism.

A realization I have encountered since I began interning with the Armenian National Committee of America (ANCA) is that Armenian-American youth possess a greater ability to affect meaningful change in support of the Armenian Homeland than we may think. At ANCA, I have learned the power of lobbying to advance pro-Armenian legislation – to place common-sense restrictions on aid to Azerbaijan, to increase aid to Artsakh, and to support Armenian sovereignty. I saw the effects of raising our collective voices in unison in the halls of Congress to pass four pro-Armenian measures in the National Defense Authorization Act.

Now as I return to campus, and continue my studies in international relations and international economics, I want to build on the ANCA experience, expand my global perspective, work in foreign policy, and do my part to protect the interests of Armenians. It is exceedingly important to raise awareness of the foreign aggression Armenia and Artsakh continue to be subjected to. And so, I look to reinvigorate the Tufts Armenian Club and sponsor events to inform people about research I conducted during the internship. I will coordinate similar educational events with the other Boston area schools so we can increase the scope of our outreach. I would encourage these audiences to follow the ANCA on social media and sign up to be ANCA Rapid Responders so they too could join us in advocacy of the Armenian Cause.

I feel that spreading Armenia’s interests to non-Armenians is extremely crucial to perpetuating our agenda because international solidarity is key to putting an end to the human rights violations we are unfortunately still experiencing. With the communication skills and wider range of knowledge acquired from the internship, I look to write more for local publications, including “The Tufts Daily”. The extensive knowledge, skills, and personal growth I have gained from this unique internship have provided me with the tools necessary to build on a lifetime of community activism through our church and schools.

Our oppressors have desecrated the vast majority of our people’s historic land, culture, and even our existence. Their hope is that through indolence and submission, the progeny of Armenian victims of genocide will allow this injustice to continue until Armenians are erased from their historic homeland.

We must stand in solidarity – committed to utilizing our collective fortitude in order to combat the ever-growing pressures from our external adversaries. It starts with making our voices heard. We must encourage young Americans of Armenian heritage to meet their civic responsibilities by serving in public office – from city halls to the U.S. Senate and the Presidency. After all, our unassailable faith and our ability to adapt and overcome have enabled us to persevere. With our continued presence, passion, and purposeful action, we will – I am certain – mark steady progress toward a stronger, safer, and more secure Armenian Homeland.

Stephen Pidedjian is a rising sophomore at Tufts University studying international relations, finance, and Spanish. He is a longtime ACYOA member as well as a member of the Tufts Armenian Club. He was a fellow in the summer 2022 ANCA Hovig Apo Saghdejian Capital Gateway Program.