Australia says position on Armenian Genocide is “under review” 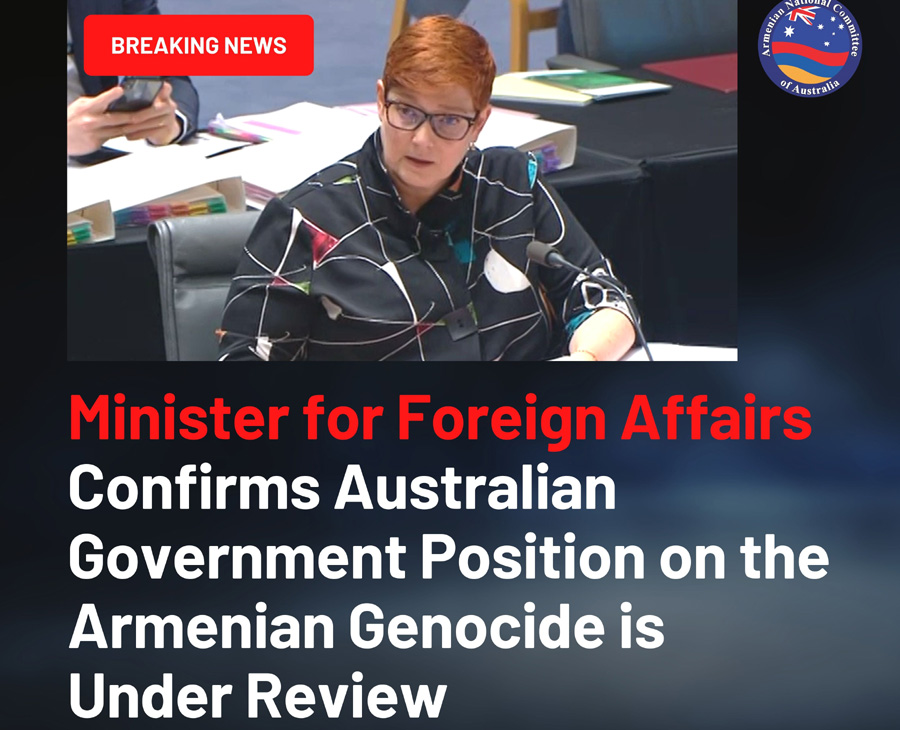 : During questioning by the Senate Foreign Affairs, Defence and Trade Legislation Committee, Minister for Foreign Affairs, Senator the Hon. Marise Payne confirmed the Australian Government’s position on the Armenian Genocide “is a matter that we have under review”, reported the Armenian National Committee of Australia (ANC-AU).

In April 2021, Prime Minister Scott Morrison, who called for Federal Australian recognition of the Armenian Genocide as a backbench MP in 2011, released his 106th Anniversary commemoration statement that failed to correctly characterise the crimes of 1915 despite acknowledging Australia’s first major international humanitarian relief effort to aid the “dispossession, deportations and deaths” suffered during the events.

Following this statement, United States President Joe Biden made history by recognising the 1915 massacres of 1.5 million Armenians as Genocide – this came after the country’s Congress recognised the Armenian Genocide in both parliamentary chambers.

On 3rd June 2021, Shadow Foreign Minister, Senator the Hon. Penny Wong – who is the Senate Leader of the Opposition, asked “about the government’s reaction to President Biden’s statement on Armenian remembrance day, including that ‘the American people honour all those Armenians who perished in the genocide that began 106 years ago today’.”

Minister Payne responded: “The Prime Minister provided a statement at the time of the Armenian commemoration, which is on 24 April. That statement very clearly recorded the position of Australian prisoners of war as witness to the dispossession, deportation and death of Armenians.”

“It is a matter that we have under review,” she added. “As you say, there have been statements of position issued by the United States and others on this matter.”

When pressed, Minister Payne continued: “We are obviously viewing the actions of other countries on this matter and drawing those into our consideration as well … The Prime Minister’s statement was a step ahead of statements he had made previously.”

Minister Payne went on to express sympathy for sustained advocacy efforts, which include amplified representations by Armenian-Australians, Assyrian-Australians, Greek-Australians and many friends in parliament calling for Federal recognition of the Armenian, Assyrian and Greek Genocides.

“There are a number of keen advocates on these issues, as you know, right across this parliament and much further afield … we are deeply sympathetic to the views that have been raised over many years.”

The Armenian National Committee of Australia expressed gratitude to Senator Penny Wong for raising these questions, and to Minister Marise Payne for confirming the Government’s policy was under review in light of local advocacy and international trends towards truth and justice on this issue.

“Through the Joint Justice Initiative, the Armenian-Australian, Assyrian-Australian and Greek-Australian communities have made clear the policy priority of our three communities is Federal Government recognition of the genocides faced by our ancestors, and we are encouraged that our collective voices are resulting in dialogue at the highest levels of Australian politics, when the country’s alternative Foreign Minister is questioning our current Foreign Minister on this position,” said ANC-AU Executive Director, Haig Kayserian.

“We are further appreciative that the outcome of this dialogue has confirmed, on public record, that the Government’s position of not correctly recognising the Armenian Genocide is under review and that Foreign Minister Payne considers Prime Minister Morrison’s characterisation of ‘dispossession, deportations and deaths’ as a step ahead.”

“We thank Senators Payne and Wong, and look forward to working with all those across Australia’s political spectrum until we achieve just recognition for the Armenian, Assyrian and Greek Genocides,” Kayserian added.