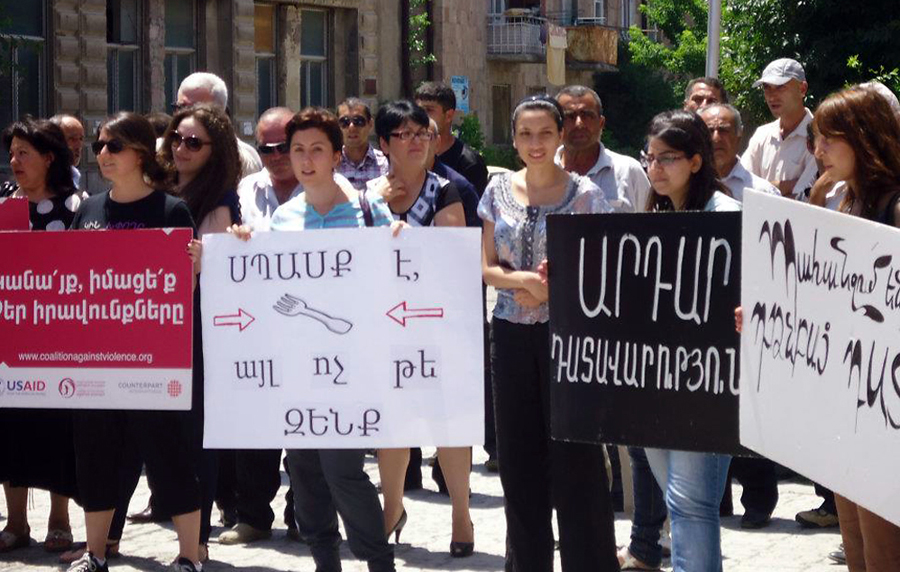 Protestors gather to oppose domestic violence in Armenia. (Photo: A Society Without Violence)

December 8, 2017. I wake up to the sound of my phone buzzing under my pillow. I am groggy and irritated. Having just survived finals season, my body has yet to recover from the erratic sleep schedule to which it was subject over the past week. Glaring at the brightness, I find two notifications gracing the screen. They are both from a close friend. One is a link to an article and the other, a message: “They did it.”

The ominous message makes me a little nervous, but it is the headline of the article that launches me out of bed.

‘At last’ is an understatement, but I push away this cynical thought in favour of celebrating the great news. They did it. ‘They’ can mean a thousand different things and a thousand different disembodied people. But to me, after my summer volunteering at Yerevan’s Women’s Support Centre, the faces of the women responsible for this progress are crystal clear in my mind’s eye. I remember working alongside them, I remember having the privilege of playing even a small part in their cause and I cannot separate their hard work from this victory. To me, ‘they’ is not a government, it is not a society, but a list of names of both activists and survivors.

The law passed with 73 in favour, 12 against, and 6 abstentions. The smile on my face is borderline arrogant thinking of the 18 parliamentarians who did not vote in favour, but again, I make an effort to keep myself in check. This is not about them. This is about progress and the empowerment of Armenian women.

I am halfway through the article when I stop dead in my tracks. The news source states that the law in question passed, but its name alludes me. I followed the initial drafting of the bill “Prevention of domestic violence and protection of victims of domestic violence.” However, its title then was definitely not the title staring back at me from my screen now. “Preventing violence in the family, protecting the victims of violence in the family, and restoring harmony in the family” was not only the new title of the bill, but implied a new premise for this social issue.

Domestic violence against women is an epidemic in Armenian society. This new title dramatically shifts the focus of the law, citing the safety of the family as a priority and veiling the actual issue at hand. It seems that Armenian women only exist in relation to their husbands and their children. Their rights as individuals only extend as far as their roles as wives, as mothers, and as daughters-in-law. In a twist of cruel irony, the Armenian legislation against domestic violence almost dehumanizes Armenian women by ignoring their safety and sanity in favour of protecting a traditional imagination of the nuclear family. The law speaks of mandatory efforts towards “reconciliation” between the victim and the abuser to honour the cohesion of their family. The priority here is clear. The safety of women is being compromised under a bastardized attempt at reinforcing Armenian family values. To think that the basic human rights of Armenian women contradict Armenian values in the first place is an insult to the gender and the culture. It takes a special brand of patriarchal ignorance to think that Armenian culture has any foundation in the oppression and violence against women and yet, the reconceptualization of this law states exactly that.

That being said, it is important to note that, on a political level, the rewording of the law is meant to appease the opposition. Of course, this law will bring great change. Of course, this law will bring new legal structures of safety and support, which Armenian women did not enjoy beforehand. The law covers a wide range of abuse, beyond just physical violence, which is an exceptionally progressive leap. It also enforces the intervention of law enforcement in instances of domestic abuse and requires these authorities to separate the abuser from the victim for a certain amount of time, in specific cases.

This remains a step forward. While I refuse to let the rewording of the law stain this victory for Armenian women across the country, it is difficult to ignore the misogynistic lens it tries to accommodate. The bottom line is that this law will improve the lives of Armenian women. No matter the costume it decides to wear, this is the first step to many other steps forward.