Protest and Sit-in at Armenian Consulate in Los Angeles 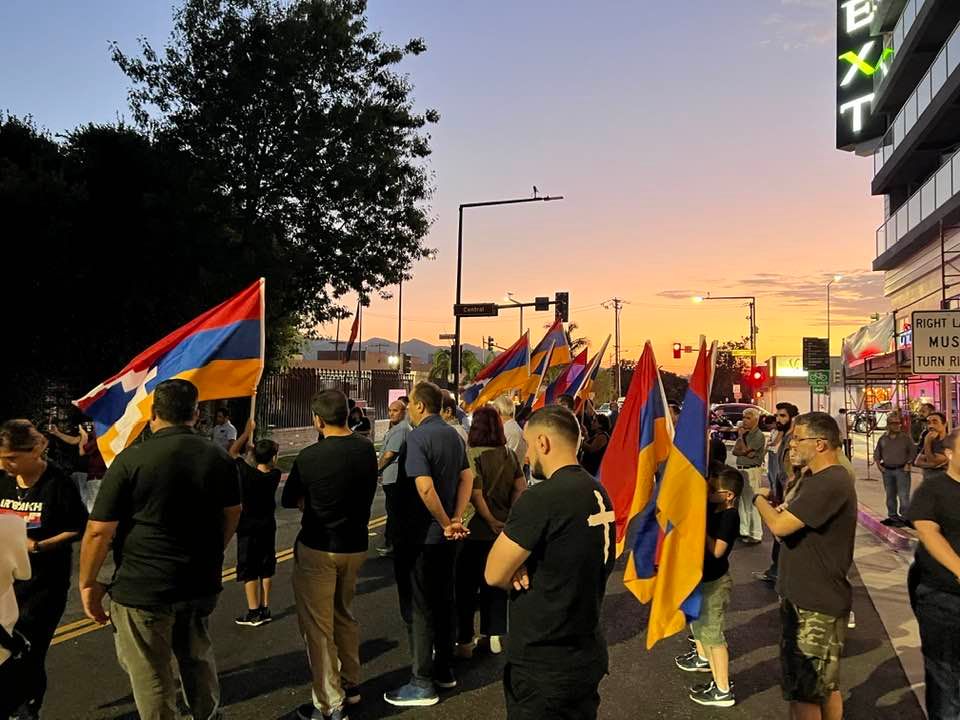 GLENDALE, CA – The Los Angeles Armenian community held an overnight demonstration in support of Artsakh in front of Consulate of the Republic of Armenia in Glendale, California.

The demonstrators surrounded the complex of the Armenian consulate in Glendale and condemned the defeatist policy of the Armenian government and the surrender of Aghavno, Berdzor and Sus settlements.

Demonstrators also placed banners with the inscriptions “Aghavno, Berdzor and Sus are Armenian” and “Freedom to Armenian prisoners of war” in front of the consulate building.

“When we thought about organizing this event, the question arose, what should we talk about? It is about 2020. It is about the capitulation signed on November 9. The point is that now is not the time for words, but for action. However, one cannot be silent. This 24-hour event, which we have organized, pursues the right goal, pursues 3 goals,” activist Robert Markarian said during the protest.

He detailed the 3 goals:

“1. We condemn the surrender of Aghavno, Berdzor, Sos and all other territories, which are being carried out today by the treacherous authorities of Armenia.

2. What is the purpose of the signed document? The document has annexes, agreements that are being exposed over the years.

3: The message is addressed to the treacherous authorities of Armenia, to tell them that our compatriots gathered here today at this event have come to say that all forms of blackmail used by you cannot in any way affect our movement and struggle,” he said.

Daron Der-Khachadourian, Chairperson of the Central Committee of the ARF Western United States of America, stated his speech, “The current situation of the Armenian world is in chaos, the Diaspora, Armenia and Artsakh are in serious trouble. Probably, after 1915, we are living in the most difficult days. A clash of national and anti-national sides is taking place in Armenia, this clash will continue. Every time the national sides prevails, we will record success, when the national wing prevailed, we created May 28, we freed Artsakh in 1992, 1993, 1994.”

He mentioned that when the anti-national wing was dominant, we had the fall of Kars, losses in Artsakh, defeat in the 44-day war, and today we also have the depopulation and surrender of Berdzor, Sos, Aghavno.

“It is very difficult to find countries where the leadership will conduct anti-national and anti-national policies, today Armenia is unfortunately in that process since May 2018,” he said.

Members and supporters of the Armenian Youth Federation of the Western United States spent the night in front of the consulate building after the rally, in a sit-in to condemn the pro-Turkish and state-destructive policies of Pashinyan’s government.

In the morning, the demonstrators attempted to stop the consulate staff from working for the day, to show their solidarity with the families who were forcibly deported from the villages of Aghavno, Berdzor, and Sus and express their disagreement with the Pashinyan government for agreeing to hand over the Armenian villages.

The Armenian consulate staff apparently alerted the Glendale Police Department, and asked them to disperse the demonstrators. The police warned the demonstrators that they would be arrested if they continued to “impede the business” being conducted in the building, at the behest of the consulate staff who insisted that they would proceed with business as usual for the day, despite the fact that hundreds of families were ethnically cleansed from their villages, with the approval of Pashinyan’s government.