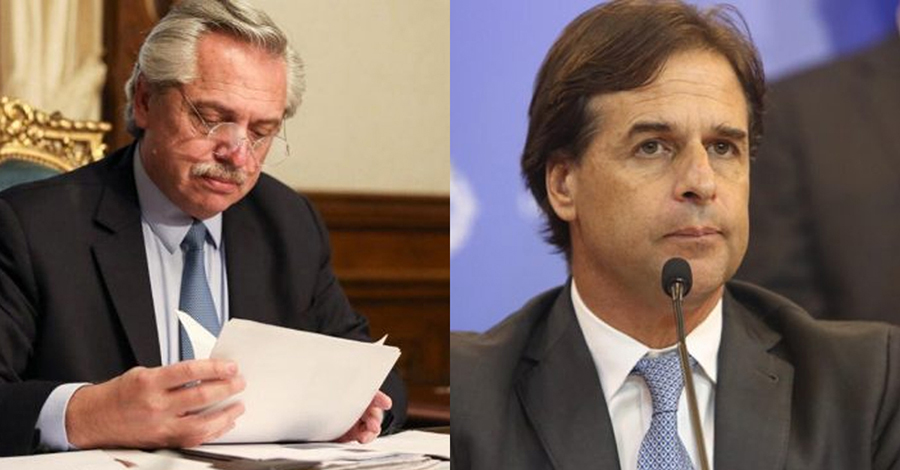 The Presidents of Argentina and Uruguay, Alberto Fernández and Luis Alberto Lacalle Pou, sent messages on their social networks on April 24 joining the commemoration of the 105th anniversary of the Armenian Genocide. So did their Foreign Ministers Felipe Solá and Ernesto Talvi. In addition, the Armenian National Committee of South America (ANCSA) in Argentina, Uruguay and Brazil received the solidarity of parliamentarians, members of legislative councils and political figures who played a leading role in the recognition of the Genocide in these countries and are known for their strong support to Armenian people’s demand for justice.

On April 24, in early morning, the official account of Casa Rosada (the Presidential Palace in Argentina), made a reference to the 105th anniversary of the Armenian Genocide, and President Alberto Fernández shared the tweet. “The genocide of the Armenian people must be a lesson to build a more just world,” says the text in Spanish. In addition, the message mentions Law No. 26,199, which formally recognizes the Armenian Genocide and establishes April 24 as an annual day of remembrance. The Law was unanimously adopted in Congress in December 2006 and the then President Néstor Kirchner accepted without objection on January 11, 2007.

Since President Raúl Alfonsín recognized the Armenian Genocide in September 1987, the Executive Power had occasionally sent indirect messages in support of the commemoration of the Genocide. President Néstor Kirchner played a leading role in stopping short any Turkish pressure to veto the law that recognized the crime; this was not the case of president Carlos Saúl Menem, who in 1995 vetoed a similar law after a special delegation from the Turkish National Assembly travelled especially to Argentina and met with him. Likewise, only except for Rafael Bielsa and Jorge Taiana, Argentine Foreign Ministers were reluctant to publicly mention the Genocide to avoid diplomatic problems with Turkey. Both messages from the Presidential Palace and the Foreign Ministry on April 24, therefore, have establish a historical antecedent, a step forward for the Armenian Cause in a country that so far is the only one where the Genocide is recognized at the level of Executive, Legislative and Judicial Powers.

In Uruguay, President Luis Alberto Lacalle Pou published on his social networks a message dedicated to the 105th anniversary of the Armenian Genocide. “Today is a day of memory and reflection for Armenians and for all humanity,” wrote the president. “A big hug to the entire Armenian community in our country that has done so much for the cause.” His Vice, Beatriz Argimón, recalled that on April 24 “the 105º anniversary of the Armenian Genocide is commemorated, and to this day, the claim for justice remains in force.” “This year also, marks the 55º anniversary since Uruguay officially recognized it as such,” she added. Uruguay’s Foreign Minister Ernesto Talvi also underlined the country’s singularity as the first one to recognize the Genocide and mentioned the “one million victims”. His Vice, the Minister of Defense and the President of the Senate in turn sent solidarity messages.

Uruguay was the first country to have a law supporting the Armenian claims based on the Treaty of Sèvres where the recognition of the Genocide is implicit and clearly worded in the arguments. In addition to the 55th anniversary of the law, the Armenian community in Uruguay mentioned also 20 years of a special session within the Parliament to commemorate the Genocide, though understandably this year in COVID-19 lockdown conditions there was no session.

ANCSA in Argentina, Uruguay and Brazil reached out to MPs, senators, political leaders, public figures, judges, intellectuals and artists who in social media expressed their solidarity with the 105th anniversary of the Genocide. While each message was shared immediately all along the day marking a special feature of the 105th virtual celebration, ANCSA later in the day prepared a compiled presentation including the pictures of 28 Argentine MPs of all political sectors -Peronists, Radicals, Socialist, Center-right, and Leftist; 8 Brazilian representatives in legislative and municipal bodies from the Social Liberal Party, Workers’ Party, Communists, Greens, Republicans and Social Democrats; 1 Uruguayan MP from the National Party; 1 Socialists from Chile; and 1 from Paraguay (Democratic Progressive Party).