My book removes the last brick from the denialist wall: Interview with Turkish historian Taner Akcam 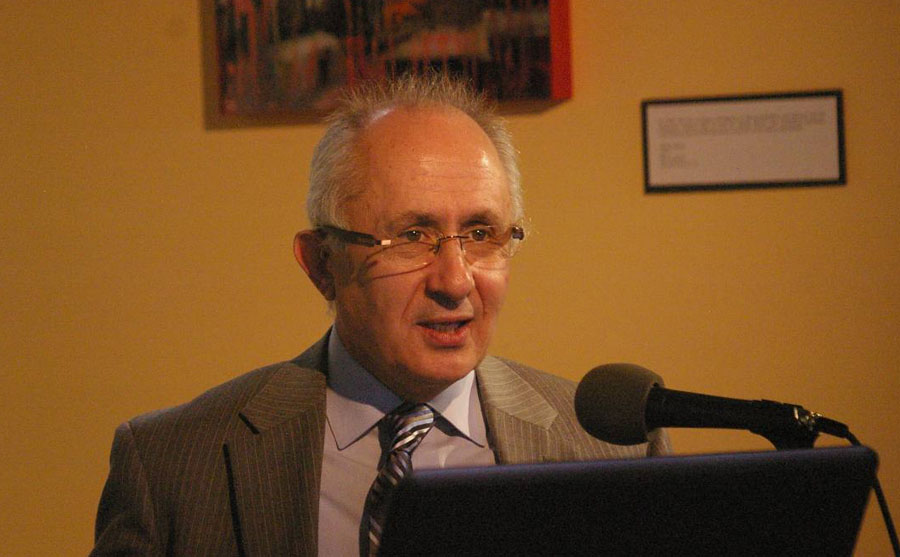 “The entire genocidal operation was organized as an official resettlement program. We have hundreds of documents in the Ottoman archives (and these are not forgeries but rather actual, authentic documents), and these were meant to convey the legal aspect of the operation, namely as a resettlement program. Indeed, the entire operation was organized by the Interior Ministry and by a Department belonging to the Ministry, the Department of Settlement of Immigrants, which coordinated the entire deportation. They ‘resettled’ the Armenians accordingly, though parallel to this operation was the killing operation, the extermination program. This is what they hide.”

One of the central denialist arguments that we couldn’t touch much was that there was no direct killing order sent by the Ottoman government vis-a-vis the Armenian population. So through this book, I’m essentially filling this gap.

On October 12, Turkish historian and sociologist Taner Akcam presented his new book “Killing Orders” in front of a packed audience at the Leacock Building of McGill University in Montreal. The next day, Horizon Weekly had the privilege of holding an interview with him in the elegant lobby of Le St. Martin Hotel & Suites. The interview was conducted by Horizon Weekly correspondent Goryoun Koyounian.

For decades now, a main pillar of Armenian genocide denial was based on the lack of authentic documentation directly pointing to the genocidal intent of the Ottoman government. Taner Akcam, a prominent Turkish-German academic, has spent years trying to counter this narrative through diligent work and research on various available archives. His new book “Killing Orders: Talat Pasha’s Telegrams and the Armenian Genocide”, addresses the aforementioned objection head-on by proving the authenticity of telegrams sent by CUP leaders communicating the desire to eradicate and destroy the Armenian population. This, along with other decades-worth of research and genocide scholarship, has led The New York Times to call Prof. Akcam the “Sherlock Holmes of the Armenian genocide”.

Below is a transcript of our video interview with Professor Taner Akcam.

Thank you very much, this is a very important point. The book does not claim that the Armenian genocide was established as a fact only after the documents were published. Just the opposite, in fact: this removes the last brick from the denialist wall. Actually, the Armenian genocide has been an established fact well before my book, throughout American universities, and in very impressive publications from several scholars. Therefore, we can easily conclude that it is established and it was a genocide. That said, the genocide argument had a missing brick on its wall. One of the central denialist arguments that we couldn’t touch much was that there was no direct killing order sent by the Ottoman government vis-a-vis the Armenian population. So through this book, I’m essentially filling this gap.

The reaction was in fact very familiar and fairly similar to the reaction to my other books, actually. The Turkish government has a standard way of reacting to the events, and that is namely to keep silent, to never show any open reaction. So there hasn’t been much of a reaction from Turkish politicians, from the Turkish public in general. There’s more of a tendency to try and minimize the effect of such publications and revelations. However, the reaction from the progressive segments of the Turkish public really has been very positive, though I must add that, given the latest political developments in Turkey, we don’t really have much of a free press or freedom of opinion, given this suppression by the Turkish government, there hasn’t been much debate on the book. Nevertheless, in all available online newspapers, news portals, etc., this book was dealt with largely through the prism of ‘news coverage’, so in that sense it was very positive.?

There was another interesting reaction: the Turkish government has an official institution in Ankara, the Center for Eurasian Studies. On their website, there were approximately 6 or 7 articles on this topic, none of which can be taken seriously in an academic sense. To give you just one example, there was a telegram sent by an Ottoman official named Behaeddin Shakir, who was the leader of the Teskilar-i Mahsusa (Special Organization), and who was coordinating the killing orders from the city of Erzurum, in which he’s asking whether the Armenians have already been exterminated or were simply sent to somewhere else to be exterminated. So the author of the article in the [Center for Eurasian Studies] website argues that Behaeddin Shakir was merely a concerned Ottoman citizen who cared about the Armenians and wished to prevent the massacres, hence why he was inquiring about what was going on there. This is a ridiculous argument to make, of course, and thus cannot be taken seriously. So these are, so far, the reactions to the book.

First of all, I must say that this dual-track mechanism argument was not first used and discovered by myself. It is one of the central arguments found in the books of [Armenian-American historian] Vahakn Dadrian, and he himself based this argument on contemporary Ottoman sources. One of the Ottoman ministers gave a speech to the Parliament in November of 1918, in which he discussed this dual-track mechanism. He said he saw with his own eyes the extermination of the Armenians and that he also saw the deportation orders. In his speech, he revealed that, parallel to these deportation orders, the government and/or the Union and Progress Party (CUP) sent the orders of extermination through special channels.

Dadrian elaborated extensively on this topic in his book and I basically summarized his view in my book The Young Turks’ Crime Against Humanity. It is true, indeed, that the entire genocidal operation was organized as an official resettlement program. We have hundreds of documents in the Ottoman archives (and these are not forgeries but rather actual, authentic documents), and these were meant to convey the legal aspect of the operation, namely as a resettlement program. Indeed, the entire operation was organized by the Interior Ministry and by a Department belonging to the Ministry, the Department of Settlement of Immigrants, which coordinated the entire deportation. They ‘resettled’ the Armenians accordingly, though parallel to this operation was the killing operation, the extermination program. This is what they hide.

Then, we have to ask why the Turkish government chose this dual mechanism. There are several answers, but one simple explanation that I have is that they were weak, they were controlled by the German government and monitored by the American ambassador (note that the U.S. did not enter the war until 1917), so they had to give the impression to foreign powers and their allies alike that this was a normal, legitimate operation; otherwise, there could’ve been an intervention, and the extermination could’ve been stopped.

I believe that denialism uses all these arguments, even though they are in contradiction to each other; regardless, they use them opportunistically and interchangeably. This ‘honest’ denialism, though it’s not much of a denial since it’s essentially a confession to the accusation, was one of the earliest ways of confronting the genocide question. Today, there is a parallel argument made in nationalistic circles in Turkey which says “It wasn’t genocide, but rather self-defense”. So, they use these arguments simultaneously, and it’s impossible to determine that a particular argument followed another in a specific time period. They use these interchangeably, whenever it’s opportunistic, precisely because they know they currently hold the power.

What I mean in my book is very simple: there is a well-known rule, namely that history is written by winners, hence why we don’t know much, for instance, about the history of the Native Americans as written by themselves. What’s called ‘historical truth’ is always the truth of the winners, so the challenge is to find a way to make our truth the powerful one. My argument is that we can’t solve this through academic publications. True, you can demonstrate various inconsistencies, lies, and falsities in the denialist wall, but [the denialists] don’t nurture from the facts or genuine understandings of history. Rather, they base their denialism on their being in power. So if we want to defeat denialism, if we want real truth and justice to be dominant, we should be in a power struggle with those denialists. Turkish denialism and the state-sponsored narrative can only be defeated through a political power struggle. This is the central message, actually.

Yes, I can say that confidently. I’d like to make a comment, though, on Vahakn Dadrian, but also on [the late Father] Krikor Guergerian, who actually published an article on the Naim-Andonian documents back in 1965, in the Armenian language, through a Beirut publication. There was also, as you mention, Vahakn Dadrian’s article published in 1986. On almost all accounts, Krikor Guerguerian and Vahakn Dadrian were correct in their assessments, but the problem remained that they were forced to speculate. For example, on the question of the usage of lined papers, the denialist claim has been that the Ottoman government never used these in their bureaucracy, which suggests that the [Naim-Andonian] documents were forgeries. Dadrian’s argument was to suggest that paper was scarce during that time period, and that might explain why lined papers weren’t used as much. He was forced to speculate in this way because the archives were closed [in the 1980s and prior].

So, my contribution to that debate was to introduce documents from the Ottoman archives written and sent by the Interior Ministry which requested that the message recipients use lined papers. The particularity about my book then was that it contained not just the original Naim Bey memoir itself, but also Ottoman Military Archives’ publication of documents whereby we can corroborate, for instance, the existence of an official named Naim Efendi Bey. I would argue, with this publication, all major claims of the Turkish Historical Society have now been totally answered to.

Professor Taner Akcam, thank you very much for your time!