An “Unfinished Symphony”: Professor Richard G. Hovannisian on the First Republic of Armenia and its legacy 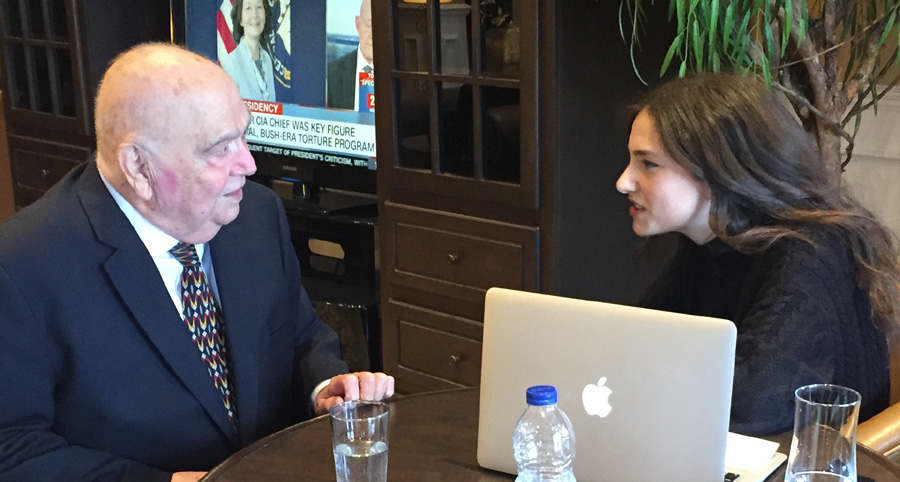 ”With the new independence, the exodus from the country, […] really, for a very small state, percentage wise, is larger than probably any other country in the world”. “Unless they turn that around, unless they find a way to provide a livelihood for people, meaningful careers for people, unless they find a way to put an end to the weaknesses of the structure of the state, including the corruption”,  Hovannisian says, the question will remain worrisome.

”When I was growing up, I was aware that there had been a brief Armenian Republic that didn’t last, and I was a romantic who dreamed about an independent Armenia with an Armenian flag. It was a very controversial subject [at the time]; I didn’t know why it was controversial [but] people were on one side or another.”

Richard G. Hovannisian, the son of a genocide survivor, was born and raised in California, in a mostly English-speaking environment. Though he did learn what he calls a “kitchen Armenian”, a rudimentary language that was, in fact, part Turkish, “it was expected that [he] would become anglified as quickly as possible”. Had it not been for Simon Vratsian, his mentor and the last Prime Minister of the First Republic of Armenia, Hovannisian would probably never have learned to read and write in Armenian: “when I met Vratsian, at the time, he saw something in me that I didn’t see myself; he saw the potential of someone who could do something”. The two met as Hovannisian was a leader within the Armenian Youth Federation and Vratsian urged him to go to Beirut to learn Armenian. And so, after completing his Bachelor’s degree at the University of California, the 21-year-old spent nine months studying the Armenian language at the Hamazgayin Nishan Palanjian Jemaran in Beirut, Lebanon. First sitting in classes with small children, learning Armenian poetry, he went on to devote “ten, fifteen hours a day going over” the Armenian letters until those took form and he was able to put them together. Interestingly, the first book he chose to read in Armenian was Vratsian’s own monumental work, The Republic of Armenia, written in “a mixture of eastern and western Armenian”. “I think the greatest gift I gave [Vratsian] after only about 3 or 4 months in Beirut was to go in and to tell him that I had finished reading his book”, Hovannisian remembers, “and he didn’t quite believe me; he smiled and nodded, [because] it seemed like I was exaggerating, but I wasn’t!”. When he returned to California, Hovannisian was “armed with language” and ready to begin his research on Armenian history “at a time when no one did that”. There were no courses in Armenian history and he, in a way, created the field: “I’m glad I was there at the right time, at the right place, and that I was able to do so”.

Hovannisian decided to write his PhD dissertation on the history of the First Republic of Armenia, but was confronted to so much information, that his dissertation, entitled Armenia on the Road to Independence, covered only the pre-history of the Republic, the years 1914 to 1918. For the next 40 years of his life, he dedicated himself to the history of the Republic, “being an investigator”, traveling to England, France, Armenia and other countries “to look at the archival holdings and see the actual documents signed by people like Avetis Aharonian […] or Alexander Khatisian”, “trying to understand this little state that didn’t succeed in the long run”. This research resulted in the publication of the four-volume The Republic of Armenia, the first major academic work on the First Republic and what is still considered to be the most extensive and authoritative source on the subject. 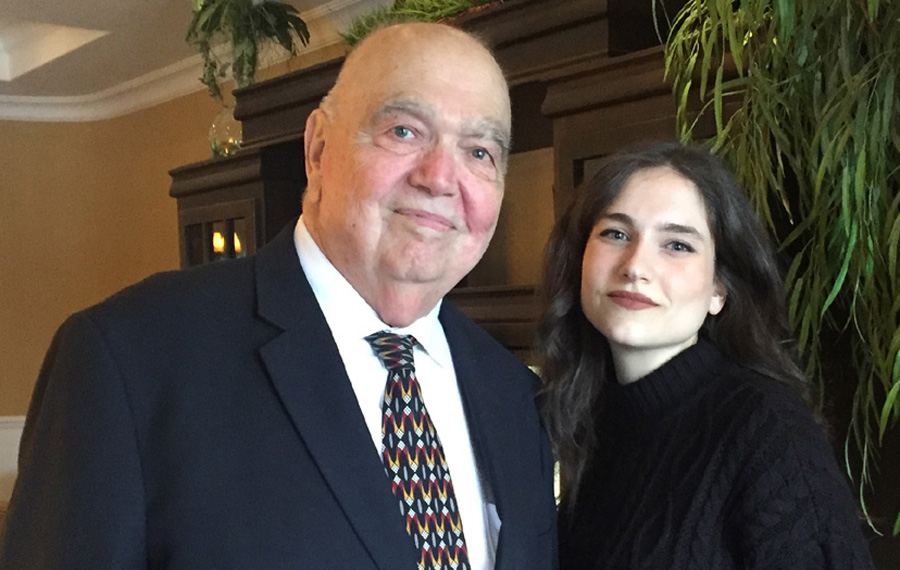 The historian calls the First Republic of Armenia an “unfinished symphony”: the state “started out under very difficult circumstances” and was “almost a miscarriage”, but there was also “a great deal of hope” tied to it, “hope that after the Turkish Empire had been defeated in World War I and after the Armenians [had been] scattered around the world, that the big powers were going to honor their pledges to create an Armenian national home”. “History has played so many tricks on the Armenians”, he says, “and one of these was in 1918”, when Armenia was constrained to proclaim its independence in Yerevan at a time when most or “all of the Armenian leadership” was in Tiflis, the current Georgian capital of Tbilisi. Indeed, Tiflis was, at the time, “a sort of capital” for the whole of the Caucasus region, and the financial, political and cultural center of Armenian life; it was also in that city that the Armenian Revolutionary Federation (ARF) was founded. Therefore, when the Turkish armies were advancing in 1918 with “the danger [that] the Russian Armenians, or eastern Armenians, would also suffer genocidal operations” as had the western Armenians, only a few ARF leaders were in Yerevan. They were centered around Aram Manoukian who “took charge of the defense” by creating a “little dictatorship” with “both the regular and irregular Armenian forces”. He, alongside others such as Tovmas Nazarbekian and Dro, were able to stem the Turkish advance and to allow for this “small piece of land to be recognized as an Armenian republic in the middle of 1918”. As Dr. Hovannisian puts it, “History dealt the card and independence came [for the] Armenians at the worst possible time”: “the Turkish armies were on the move, Russia was in civil war”; “there was no assistance or help to be expected from anywhere and the Armenians were […] left to their own”. Ultimately, and although there was a “great deal of enthusiasm” tied to the idea of having a national republic, history unfolded differently: “the big powers drew a map that included much of the eastern provinces of the Ottoman Empire but they did nothing to get the Turkish armies out of the region and did nothing to join it to the little republic that had been created in Yerevan”.

This period, the one preceding the Republic, was researched and studied in Hovannisian’s PhD dissertation, while the following two and a half years were covered in his four volume Republic. “I wrote, like someone said, fifty pages for every day of the republic” he says, laughing. The worth that this work has for subsequent researchers, academics and historians is truly invaluable. Its importance goes beyond Armenian history because, as he puts it, “the history of the Republic is also the history of the world”: in order to understand what happened in Armenia, it is necessary to look at the domestic policy in the United States, to evaluate British policy and to analyze the Russian civil war. In his work, “Armenia is the focus, but the history is global”. Moreover, the fact that this work was written and published in English adds to its significance. One’s potential audience is much greater when one choses to publish in English, but that choice also adds to the quality of the work, according to the professor: “we have to perhaps be a little more careful” when writing in English. It may be that it is easier to “take some liberties” when “writing in your own native language”, especially “when it comes down to patriotic sentiment and so forth”; but “to be accepted as a bona fide scholar by the larger community, outside your own ethnic group, you have to be able to stand up to rigorous standards of scholarship”, and offer a “balanced presentation”. He adds: “I have my sympathies, my sympathies are obvious, but at the same time I need to be balanced, I need to show if there were shortcomings in the Armenian leadership […], and in that way, find much greater acceptance”. Today, the four-volume The Republic of Armenia is available in an Armenian translation, and some of his later works on the historic provinces of western Armenia are being translated in Turkish. It is surely through the sharing of objective, nuanced and multi-faceted scholarly works that we can better understand where we come from, and decide where we want to go.

The topic of Armenia’s future is, for Dr. Hovannisian, a “worrisome question”. He recalls his youth and his years of research as a time when there was hope for Armenia: soviet Armenia was “a gathering in” of people who were returning to their “homeland” after having spent years in France or Argentina or elsewhere; “suddenly, with the new independence, the exodus from the country, […] really, for a very small state, percentage wise, is larger than probably any other country in the world”. “Unless they turn that around, unless they find a way to provide a livelihood for people, meaningful careers for people, unless they find a way to put an end to the weaknesses of the structure of the state, including the corruption”, he says, the question will remain worrisome. “But I am glad that today May 28th is recognized by all segments of the community, […] that the importance of […] the [First] Republic’s existence for the future of the Armenian people” is acknowledged “even though it was an unfinished symphony, [and] even though it remains so”. “We should really kourkoural” (care for) this “landlocked, terribly disadvantaged 30 000 square kilometers”, so that we can “find the means to its strengthening and preservation” for it “to be a part of, a real part of, the family of nations”.