Why is Baku waging a “war of words” against Tehran? 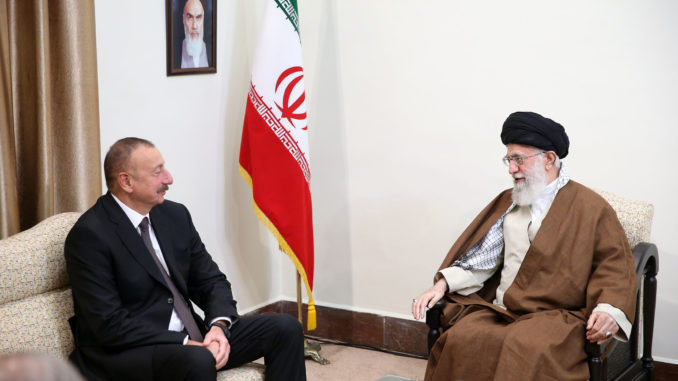 During a meeting with Russian President Vladimir Putin and Turkish President Recep Tayyip Erdogan in Tehran on July 19, the Iranian Supreme Leader Ali Khamenei warned against blocking the Armenian-Iranian border, stating, “If there is an effort to block the border between Iran and Armenia, the Islamic Republic will oppose it because this border has been a communication route for thousands of years.” After this warning, Turkish and Azerbaijani media started paying more attention to Iranian officials and launched a “war of words.”
In response to media provocations and threats toward Armenia launched by Azerbaijan, Iran facilitated the appointment of a Consulate General in Syunik to redraw its “red lines” in the South Caucasus. The following analysis will highlight the background of the recent tension between Baku and Tehran and analyze the advantages of opening a Consulate General in Syunik for both Armenia and Iran.

On August 26, 2022, Azerbaijan’s Caliber.az published an article titled, “The time has come: South Azerbaijan must secede from Iran: An appeal to brothers,” warning Iran not “to play with fire” and calling for Iranian Azeris to demand independence. The next day Haqqin.az, a website connected to Azerbaijan’s security services, published an article with the headline, “Southern Azerbaijan is striving for independence!” The anonymous author mentions that the Azerbaijani government “has enough mobilizing force to defend the rights of its compatriots” (in Southern Azerbaijan) and “enough resources to support a new wave of the national-liberation movement.” It is not surprising that Baku is venturing closer to openly promoting secessionist and pan-Turkic tendencies for Iran’s large ethnic Azeri minority, often with the backing of foreign actors.

Also unsurprisingly, whenever tension between Tehran and Baku rises, Israel takes advantage of the opportunity to fan the flames. On July 20, Israel’s ambassador to Baku George Deek tweeted a photo of himself reading the book “Mysterious Tales of Tabriz,” referring to the major city of northern Iran as an “ancient Azerbaijani city.” The tweet caused a massive social media reaction, where several Azerbaijanis and like-minded “Western experts” tweeted similar images, eliciting a harsh reaction from Iran’s ambassador to Baku, Abbas Mousavi. In response, several Azerbaijani media outlets republished an article posted in “Breaking Defense” that stated that Azerbaijan could offer up its airspace for Israeli jets to enter Iranian territory or send Israeli special units to Iran.

Such threats from the Azerbaijani side caused some Iranian officials and experts to raise questions about the future of Azerbaijani-Iranian relations. Yeni Safak, a Turkish pro-government mouthpiece, published an article arguing that Iran has been “annoyed by the Zangezur Corridor.” The article quoted Abolfazl Zohravand, an Iranian official participating in the nuclear deal talks, stating that the corridor possesses a threat to Iran since it aims to cut off Iran from the Caucasus region. Zohravand added, “The Turks want to control the Zangezur, too…We cannot think of a strategic alliance or even a strategic partnership with Turkey.”

This was the first time a senior Iranian official publicly called Azerbaijan’s legitimacy into question, as Zohravand argued that the existence of Azerbaijan “is a terrible phenomenon and a potential threat to Iran.” He said that “not only Nakhichevan but whole Azerbaijan must be annexed to Iran since it had been part of Persia, otherwise it will be a cancerous cell in Iran’s head.” He also considered Yerevan as Tehran’s natural and historic ally in the region.

But why has Baku brought back the “Zangezur corridor” issue after signing a deal with Iran in March 2022 on constructing a transport route to Nakhichevan via Iran bypassing Armenia? In an interview with the Weekly, Dr. Ehsan Movahedian, professor of international relations at the ATU University in Tehran, said that the construction of the “Zangezur corridor” will create geopolitical and geo-economic challenges for Iran. Dr. Movahedian argues that “NATO’s Turanic corridor” aims to contain the rise of Russia, China and Iran in Eurasia. Economically, the route is also a direct threat to the North-South corridor and will replace the gas pipelines that Iran supplies to Nakhichevan with gas pipelines coming from Azerbaijan and Central Asia. Hence, Iran will lose its trade and energy transit role in the region. Dr. Movahedian also expressed concerns that the creation of this corridor will mobilize pan-Turkic aspirations not just in Northern Iran, but also will increase Turkey’s support and NATO’s penetration to the Northern Caucasus, Central Asia and even as far as the Xinjiang province of China. Hence, with this aim, NATO will clearly encircle the region, and with the help of Turkish and even Israeli operatives, will create ethnic and sectarian tensions

Another Iranian political expert, Mehfam Suleimanbeigi, mentions that Baku is taking advantage of the war in Ukraine to announce its intentions to create a corridor in Syunik that would cut the Armenian-Iranian border. According to the Iranian expert, this “corridor” is dangerous for Iran as it will stand in the way of the strategic International North-South Transport corridor and will prevent Iran’s access to the Eurasian and European markets. It is worth mentioning that Armenia is the only Eurasian Economic Union (EAEU) member state that borders Iran. Thus, the Meghri Free Economic Zone can serve as an import-export hub for EAEU countries and Iran. It is within this context that we should analyze Iran’s recent step in appointing Abedin Varamin as Consul General in Syunik’s town of Kapan, which has antagonized Turkish and Azerbaijani authorities.

The Advantages of Opening a Consulate in Syunik for Iran

According to Iranian political analyst Mohsen Pakaein, by opening a Consulate General in Kapan, Iran sent the following messages to the region:

Many statements by Iranian officials reveal this political motive. Ali Hosseini, head of the Transport Commission of the Iran Chamber of Commerce, emphasized that Iran must maintain a balanced policy between Armenia and Azerbaijan by engaging in economic activities with both countries. He also stressed that Iran must enter into greater cooperation with the Republic of Azerbaijan, because most of Azerbaijan’s transit is through Iranian soil, and Iran’s Astara area bordering Azerbaijan is strategic to Russia. He also highlighted that the INSTC should be connected to the Rasht railway through the Astara border. The expert raised concern that the “Zangezur corridor” would undermine Iran’s strategic leverage over Nakhichevan, since Iran serves as a transit hub that connects Azerbaijan proper to Nakhichevan. Many Iranians also accuse Israel of backing Baku and Ankara in isolating Iran from the region. Dr. Movahedian argues that “if Israel seeks to use the territory of neighboring countries to harm Iran, the Islamic Republic will definitely show a reciprocal and proportional reaction. Because it has enough experience and power for this task and has already proved its seriousness by attacking the American military base in (Northern) Iraq and shooting down the American drone in the Persian Gulf.” Finally, Ali Ziyai, the director of the Iran Transportation Think Tank, said that the future will not forgive Iran if the “Zangezur corridor” is established.

With the construction of the “Zangezur corridor,” Iran will be deprived of the transit income of Turkey’s export goods to Central Asia and Afghanistan, and it will also lose the transit of Azerbaijan. Iran is concerned that in the future Turkey may see this as an opportunity to create some obstacles to the export of Iranian goods via Turkey, and with the loss of its border with Armenia, Iran’s trading routes with Europe and Eurasia will be at the mercy of Turkish and Azerbaijani trade routes. Hence, Ankara’s and Baku’s economic and political leverage over Tehran would increase, paving the way for pan-Turkic secessionist movements in northern Iran.
Despite the fact that the ninth clause of the November 9, 2020, trilateral statement mentions that Armenia will provide a route to connect Nakhichevan to the Republic of Azerbaijan for commercial reasons it doesn’t mention the word “corridor,” despite Baku’s claims that this clause justifies the “Zangezur Corridor.” Nowhere in this statement is there any mention of creating a corridor along the border of Armenia with Iran. By pushing the narrative of a “corridor,” Baku not only violates the trilateral statement, but clearly violates the territorial integrity of Armenia, threatening the territorial geography of the Armenian-Iranian border and paving the way for pan-Turkic aspirations in northern Iran.