U.S. Tells Baku to Reject ‘Outside Actors’ in Karabakh Conflict 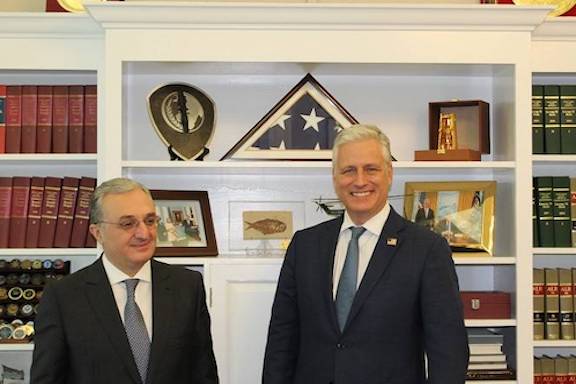 U.S. National Security Advisor Robert C. O’Brien urged Azerbaijan to reject “outside actors,” which he said are destabilizing the situation, in an apparent reference to Turkey, which has unequivocally and militarily supporting Azerbaijan since it began its aggressive attacks on Artsakh on September 27.

“In my meeting with Azerbaijani foreign minister Jeyhun Bayramov, I pressed for an immediate ceasefire then a return to Minsk Group-facilitated negotiations with Armenia, and rejection of outside actors further destabilizing the situation. There is no military solution,” O’Brien said in a Twitter post on Friday.

He also presented details from his meeting with Armenia’s Foreign Minister Zohrab Mnatsakanyan, stating that the U.S. will continue its strongest diplomatic efforts at all levels until the conflict is resolved. “We discussed the need for an immediate ceasefire and a return to Minsk Group-facilitated negotiations with Azerbaijan,” O’Brien said.

Mnatsakanyan and Bayramov met with Secretary of State Mike Pompeo on Friday in Washington.

According to Armenia’s Foreign Ministry, Mnatsakanyan briefed O’Brien on the current situation in the Karabakh conflict zone, saying that by unleashing a large-scale war Azerbaijan was targeting the civilian population of Artsakh.

Mnatsakanyan expressed strong concern over Turkey’s expansionist policy toward the South Caucasus, aiming to turn the region into a new hotbed of instability and using Azerbaijan as a foothold. According to Mnatsakanyan, Turkey’s direct military participation in the war, as well as deploying foreign terrorist fighters from the Middle East, poses a serious threat to the security of the entire region.

Both sides stressed the need for the immediate implementation of the ceasefire agreements. The two agreed that a peaceful settlement of the Nagorno Karabakh conflict is possible within the framework of the OSCE Minsk Group Co-Chairmanship.

After meeting with Mnatsakanyan and Bayramov, Pompeo called Josep Borrell, the European Union’s Foreign Affairs Representative to discuss the Karabakh conflict and the situation in the military zone.

Borrell and Pompeo urged the immediate end hostilities and respect for the agreed ceasefire.

“They called upon the sides to re-engage in meaningful negotiations without delay under the auspices of the OSCE Minsk Group Co-Chairs. The two principals call on all actors, including external parties, to refrain from actions that may increase the risks for the region,” a press statement said.