U.S. Senator calls on Biden Administration to halt all security assistance to Azerbaijan 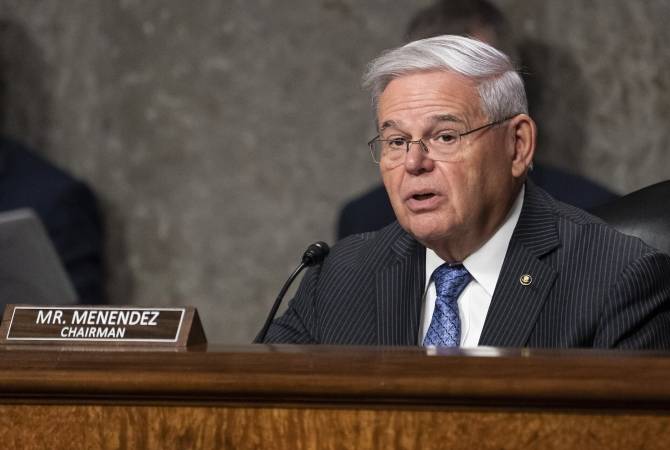 U.S. Senator Robert Menendez (D-NJ), the Chairman of the Senate Foreign Relations Committee, citing Azerbaijan’s most recent attacks on Armenia, called on the Biden Administration to “halt all security assistance to Azerbaijan and review all assistance programs to the country,” reported the Armenian National Committee of America (ANCA.)

“We want to thank Chairman Menendez for his principled, powerful, and persistent leadership in cutting off all U.S. military aid to Azerbaijan – an urgent undertaking made all the more pressing by Aliyev’s bombing, invasion, and occupation of sovereign Armenian soil,” said ANCA National Board Member Ani Tchaghlasian, who hails from the Garden State. “Working alongside Senator Menendez, we are committed to pursuing statutory and all other avenues available to us to stop the flow of U.S. tax dollars to oil-rich Azerbaijan’s openly aggressive and violently anti-Armenian regime.”

In strongly worded September 22nd letter to Secretary of State Antony Blinken, Chairman Menendez asserted, “The United States must play no part in supporting authoritarian brutality,” pledging to work with Senate and House colleagues to eliminate the presidential waiver authority of Section 907 (Public Law 107-115) restrictions on U.S. aid to Azerbaijan.

Chairman Menendez stressed that a Government Accountability Office review he had commissioned detailing U.S. aid to Azerbaijan had shown that the State Department “failed to meet statutory reporting requirements to Congress on the impact of U.S. assistance during the period considered. While the Department of State has concurred with the GAO on its recommendations to ensure the necessary requirements are met to invoke the waiver, it has not yet provided action plans to the GAO on how it will address this concern.”

He went on to emphasize that the “Administration must not to minimize the Azerbaijani assault in an effort to appear impartial. President Biden said in his 2022 State of the Union Address, ‘…when dictators do not pay a price for their aggression, they cause more chaos.’ The United States has an important opportunity to stand with the Armenian people as they attempt to repel an authoritarian assault.”