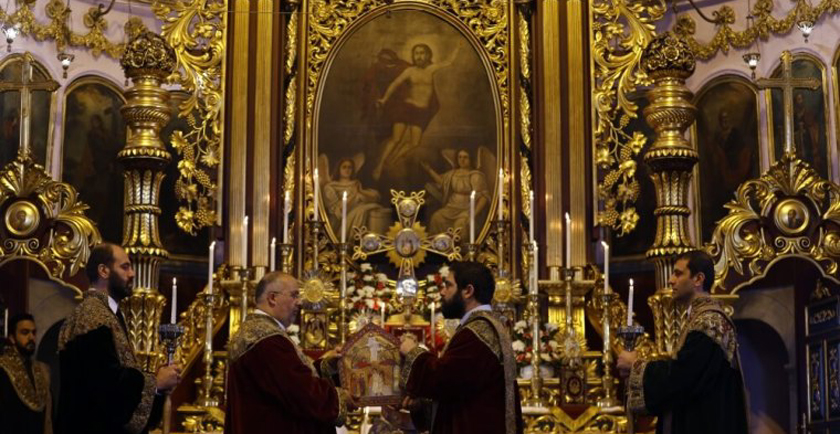 Priests hold a mass at Surp Asdvadzadzin Patriarchal Church in Istanbul, Turkey, April 24, 2015, as part of events to commemorate the victims of mass killings of Armenians by Ottoman Turks. | Reuters/Murad Sezer

Attacks on churches in Turkey have spiked during the coronavirus pandemic as some blame Christians for the crisis and other social woes, according to a leading international Christian satellite television network, The Christian post reports.

SAT-7, which broadcasts Christian programming into the Middle East and North Africa, warns that angry individuals have attacked churches, including incidents of attempted arson and removals of crosses, as “coronavirus-fueled anger” has led to a “climate of fear [and] hatred.”

In Turkey, there have been at least 191,000 cases of coronavirus and 5,000 related deaths as of Thursday. Even before the pandemic, Turkey was experiencing economic struggles with increasing unemployment, a problem made worse by coronavirus-related financial hardships.

In a statement to media this week, SAT-7 warned that some Turks have been “looking for a scapegoat to vent their anger,” which has put “Christians and other minorities in the direct line of protests.”

“We know firsthand the climate of hatred and its devastating effects on Turkey and on the churches exposed to it,” Turkish SAT-7 presenter Senem Ekener said. “We aim to counter that with lives that reflect Christ.”

In early May, a person attempted to set the front gate of the Dznunt Surp Asdvadzadzin Armenian Church in Istanbul on fire. No officials of the church were hurt and the gate sustained no structural damage.

Church leadership filed a complaint with police and were told that authorities would do all they could to catch the perpetrator. The Armenia-based News.am reports that a suspect was apprehended.

This week, a Turkish citizen named Mazlum Serin was sentenced to five years and four months in prison after he was caught on camera breaking a cross on the gate of the Surp Krikor Lusavoriç Armenian Church in Istanbul on May 23.

According to Middle East Monitor, Serin told investigators that he “was just angry that day” and didn’t “plan or intend to harm the church,” adding that he respects “all religions.” Serin was charged with the crime of “damaging places of worship and cemeteries.”

SAT-7 is the only Christian network that broadcasts every day in the Turkish language. It is trying to use its platform to get the point across that Christians are not a threat and to encourage local Christians to respond to the attacks by “living out their faith with love and taking the path of peace.”

“The pandemic has created fear and frustration in Turkey, with Christians sometimes being blamed for the problem,” SAT-7 President Rex Rogers said in a statement.

According to the nongovernmental organization International Christian Concern, Armenian churches in Turkey are not strangers to vandalism and defacement. The group warned in a statement Wednesday that attackers of churches and Christians often “escape justice.”

“Turkish media also perpetuates and even encourages these incidents, making it even more common for justice to remain fleeting,” ICC, a United States-based advocacy group, contends. “Turkey’s media is mostly state-run and it frequently posts hate speech directed toward Christians, Jews, and other religious minorities. These instances of hate speech are often linked to an increase in persecution incidents.”

ICC reported in May that the Turkish magazine Gercek Hayat published a 176-page special edition that alleges key religious minority leaders, including Ecumenical Patriarch Bartholomew, are part of a terrorist movement and accused them of staging the 2016 coup attempt of trying to overthrow the Erdogan government.

According to ICC, religious leaders condemned the allegations and warned that they could incite attacks and desecration.

A similar accusation was made against American missionary Andrew Brunson, who spent two years in a Turkish prison before being allowed to return home to the U.S. in October 2018.

Alexander Görlach, a senior fellow with the Carnegie Council for Ethics in International Affairs and a senior research associate at the Religion & International Studies Institute at Cambridge University, warned in a recent op-ed that “Christians are becoming a welcome scapegoat for Ankara,” even on issues relating to Syria and Libya.

“The marginalization of Turkey’s Christians isn’t new for President Recep Tayyip Erdogan: He’s been busy reorganizing his secular republic into a mixture of Ottomanism and Islam for some time now,” Görlach stated.

Turkey, one of the world’s largest Muslim countries, ranks as the 36th-worst country in the world when it comes to Christian persecution, according to Open Doors USA, a U.S.-based group monitoring persecution in 60 countries.

Open Doors notes in an online fact page about Turkey that media reporting on Christians there is “very biased,” resulting in discrimination.

“Those from ethnic minorities, such as Greek Orthodox, Armenian and Syriac Christians, experience discrimination in the workplace, especially where employers have government ties,” Open Doors warns.  “Religious affiliation is recorded on ID cards, so it’s easy to discriminate against Christian applicants.”