Turkey’s support of terrorists in Syria exposed in secret wiretaps 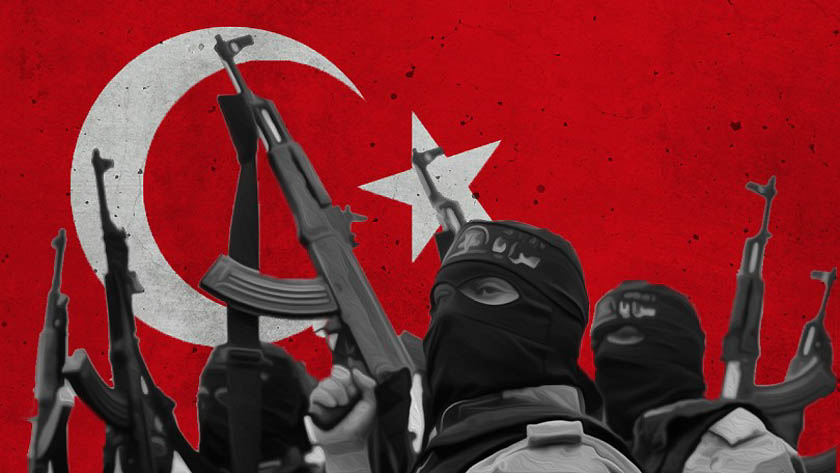 Turkish journalist Abdullah Bozkurt exposed in The Investigative Journal of the Stockholm Center for Freedom that “hundreds of secret wiretap records obtained from confidential sources in the Turkish capital of Ankara reveal how the Islamist government of President Recep Tayyip Erdogan has enabled —and even facilitated — the movement of foreign and Turkish militants across the Turkish border into Syria to fight alongside jihadists in the Islamic State of Iraq and Levant (ISIL, also known as ISIS or Daesh).”

These secret documents revealed by Bozkurt “indicate that an implicit agreement existed between ISIS and Turkish security officials that allowed traffickers to operate freely on both sides of the porous 511-mile (822-kilometer) Turkish Syrian border without repercussions from the Erdogan government. The agreement also permitted ISIS to run logistical lines across the border and to transport wounded fighters back into Turkey for medical treatment.”

At the helm of this sinister ISIS smuggling operation is a 36-year-old Saudi-born Turk, Ilhami Bali, with the code name Abu Bakr. He facilitated and orchestrated “the movement of large numbers of foreign and local militants back and forth along the Turkish-Syrian border. … Bali [also] moved goods across the border for ISIS, ranging from shoes and clothing to handcuffs, drone parts, binoculars, tents, a spotlight projector and even a boat. Additionally, the wiretaps show the Turkish government knew the names and locations of 33 Turkish nationals who pledged to work as drivers in ISIS’s smuggling network,” Bozkurt reported.

According to indictments filed by Turkish prosecutors, “Bali is accused of being the mastermind behind three deadly 2015 terrorist attacks in Turkey’s capital city, Ankara, that claimed the lives of 142 people. A year later, a criminal court issued another warrant for Balı’s arrest for his alleged role in a suicide bomb attack—the deadliest in Turkey’s history—on October 10, 2015 in Ankara. The explosion killed 105 civilians, including the two suicide bombers, as ISIS militants targeted NGOs and the supporters of left-wing and pro-Kurdish parties, who were holding a peace rally outside the city’s main train station weeks ahead of the November 1, 2015 snap elections,” Bozkurt revealed. Although the Turkish authorities knew Bali’s exact location and Turkish courts issued several arrest warrants against him, the Erdogan government had let him roam freely between Turkey and Syria.

The wiretap records also indicated that ISIS had a hot line between the terrorists in Syria and Turkey. Bali monitored the phone calls and organized the transfer of militants from Turkey to Syria. In one wiretap, a Georgian militant named Lasha Nadirashvili told Bali that four jihadists were awaiting pickup at a shopping mall in Gaziantep, one hour drive from the Syrian border. Bali notified the jihadists the designated meeting place where he would pick them up and help them cross the border. In another wiretap, a Russian jihadist Oleksandr Pushchuk told Bali that 11 jihadists in Gaziantep were waiting to be picked up.

Bali was also heard on a wiretap giving a report to ISIS on the number of jihadists he had helped smuggle into Syria. “On average, in a single day at one crossing point, ISIS smuggles anywhere from 50 to more than 100 militants across the Turkish-Syrian border according to wiretaps, bringing yearly conservative estimates to well over 15,000 smuggled individuals,” Bozkurt wrote.

Another important service Bali provided for jihadists was their medical treatment at M.I.S. Danismanlik hospital in Ankara. One wiretap revealed a conversation between Bali and M.I.S. Danismanlik’s owner Savas Dogru regarding a $62,000 payment for treating 16 ISIS militants. In another conversation, Dogru complained about unpaid bills of $150,000 for surgeries to ISIS terrorists smuggled from Syria.

The wiretaps also implicated MIT (Turkish National Intelligence Organization) for helping jihadists evade the local police. Hakan Fidan, the head of MIT, is a close confidante of Pres. Erdogan. In 2014, MIT officers were caught at the border smuggling truck-loads of weapons for jihadists in Syria. The Turkish government quickly released the MIT officers and charged with treason the reporter who disclosed the smuggled weapons.

In a recorded conversation between Bali and a Turkish soldier, Bali was told that he would get whatever he needed. The two agreed to ensure that there was no confrontation between ISIS and Turkish security guards.

Surprisingly, then-Prime Minister Ahmet Davutoglu announced on television that the government could not arrest suicide bombers until they acted, even though Turkey had advance warning and the list of names of potential suicide bombers. These suicide bombings in fact boosted Erdogan’s ruling party’s ratings in advance of the November 2015 Turkish parliamentary elections.

Bozkurt went on to state that there are serious questions regarding “cases involving ISIS, al-Qaeda and other armed jihadist groups [who] are being investigated, prosecuted, and tried in Turkey. The astonishingly low number of convictions in ISIS cases illustrates how the government is unwilling to successfully prosecute ISIS cases.”

Bozkurt correctly pointed out that Erdogan’s government uses draconian measures to arrest innocent journalists, human rights activists, academics and political opponents, but is very lenient on real terrorists: “The fact that, in many cases, detained ISIS and al-Qaeda members have been let go with a mere slap on the wrist can only be explained by the political cover and protection provided by the government.”

In my opinion, the European countries and the United States have to take strong measures to curtail Erdogan’s support of terrorists in Syria. It is strange that Turkey as a NATO member is aiding and arming terrorists who have been committing murders in several other NATO countries. This cannot be allowed to continue. Pres. Trump’s announced pull-out of American forces from Syria under the pretext that the Turkish military will continue the fight against ISIS is a dangerous decision which will give Turkey a free hand to strengthen the terrorists in Syria and elsewhere.