Turkey attempts to take over Armenian properties in Jerusalem 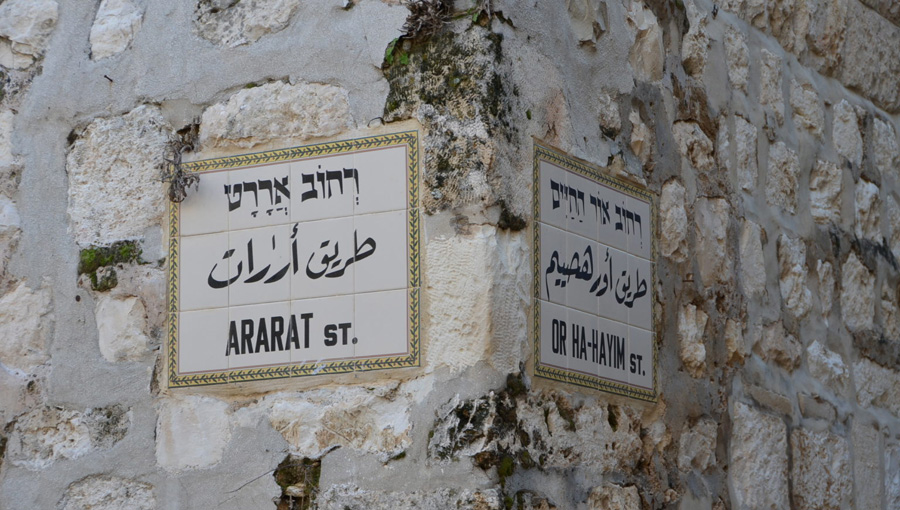 An article in the Jewish Press of February 13, 2020 exposed the activities of the Turkish Government to take over the Armenian and Christian Quarters of Jerusalem. The article by journalist Baruch Yedid is titled, “Turkey Working to Take Over Armenian Quarters in Jerusalem’s Old City.”

Jerusalem’s Armenian “residents have told TPS [Tazpit Press Service] about efforts of Turkish officials in recent years to persuade them to deny the Armenian holocaust perpetrated by the Turks a century ago and other actions to acquire property owned by local Christians,” according to Yedid.

A Jerusalem Armenian, whose grandfather had survived the Armenian Genocide, told TPS that 40 minutes into a meeting with a Turkish female diplomat, she tried to convince him to drop his activities for the recognition of the Armenian Genocide. “I realized that she wanted to persuade me to cease my activity to preserve the Armenian massacre.” The Armenian said that he immediately showed the door to the Turkish diplomat who understood that the Armenian community will never give up on the recognition of the Genocide. “We will wait another 100 years, but we will never rescind our demand for compensation until we reach a payment agreement, like the one that Israel signed with Germany,” the Armenian said.

Other Armenian property owners in Jerusalem told TPS that Turkish government representatives recently offered them $3,000 grants for their various needs. However, Armenians rejected the Turkish bribes, calling them “silencing grants designed to ensure that the Turkish government will not be sued for the 1915-1917 massacres.” Even though the Israeli journalist Yedid uses the term ‘massacre’ in line with the Israeli Government’s denialist policy, he quickly deviates from that policy by explaining that “the Armenian extermination was a deliberate and systematic genocide perpetrated by the Ottoman Empire during the First World War against the Armenian population in its territory. Even after World War I, Turks, Kurds, and Arabs continued to massacre Armenians until 1923, and it is widely believed that about half the Armenians in Turkey, about 1.5 million people, were murdered.” Turks and Kurds did commit Genocide against Armenians, but I am not aware of any massacres of Armenians by Arabs.

Yedid continued his article by citing examples of Turkish attempts to purchase Armenian properties in Jerusalem: “Turkish pressures are also manifest in its activity to acquire Armenian assets. TPS learned that a few months ago, the residents of the Armenian Quarter were shocked to find that one of their homes was sold to a Muslim, three times its real value. An inquiry revealed that funding for the purchase of the Armenian property came from Turkey. Following the incident, some of the community leaders met to review the chain of events and took action to prevent the leakage of the community’s assets to the Turks. There is still a lingering fear among the Armenians of the Turks taking over or buying more property.”

Yedid cited another Turkish scheme to take over Christian properties in Jerusalem: “One Christian trader, who asked to remain anonymous, said that the Turks recently transferred to the Jordanian Waqf [Muslim endowment] very old ownership certificates, some crumbling, including Ottoman-era documents and property ownership documents in the Armenian and Christian Quarters. The trader, who showed TPS photos of several of the certificates, says the Turks have asked the Waqf to verify the documents which are being used to purchase the assets.” It is paradoxical that the Turkish government would not disclose from its archives the certificates of properties (deeds of trust) owned by Armenians prior to the Genocide, yet it would send copies of property certificates to a Jordanian Waqf.

Yedid also covered in his article “the growing Turkish activity in Jerusalem and its support for the Muslim Brotherhood [which] are of concern to Israel. In its recent annual intelligence assessment, the IDF [Israel Defense Forces] Intelligence Division has, for the first time, defined Turkey as a threat.”

The Israeli journalist correctly pointed out that “Turkey monitors all publications on the Armenian genocide and considers the issue of great significance to Turkish national security, and accordingly, the Turks have not relented with their attempt to persuade the Armenians in Jerusalem to cease their commemorative endeavors.”Yedid also reported that the Turkish government has been encouraging Turkish tourism to Jerusalem by paying the cost of travel to mosques in Jerusalem and the West Bank: “Turkish nonprofits operate in Jerusalem daily, helping mainly the Muslim Brotherhood and Jerusalem religious activities. A source in the Armenian Quarter said that Turkish tourists in the Old City have also recently been working against the Armenians, tearing up posters and publications about the Armenian genocide. Graffiti inscriptions in condemnation of the Armenians were sprayed on the Quarter’s walls.”Furthermore, the Turkish ‘Heritage’ Society is active in Jerusalem “in the fields of education, culture, real estate and welfare, and also carries funding for the ‘convoy project’ to transport thousands of Muslim worshipers to mosques as well as funding tens of thousands of meals to break the Ramadan fast,” according to Yedid.Similarly, TIKA, Turkey’s Ministry of Culture and Tourism’s Turkish Cooperation and Coordination Agency, funded several projects in Jerusalem. Dozens of mosques and houses have been renovated by Turkey.It is up to the Armenian Patriarchate of Jerusalem to counter the Turkish efforts by precluding local Armenians from selling their properties to Turkish buyers. The Armenian Government’s Office of the High Commissioner for Diaspora Affairs should assist the Armenian Patriarchate of Jerusalem to oppose the Turkish attempts to encroach on the Armenian Quarter in Jerusalem.