Trump Surrenders to Erdogan’s Demands: The Tail Wags the Dog 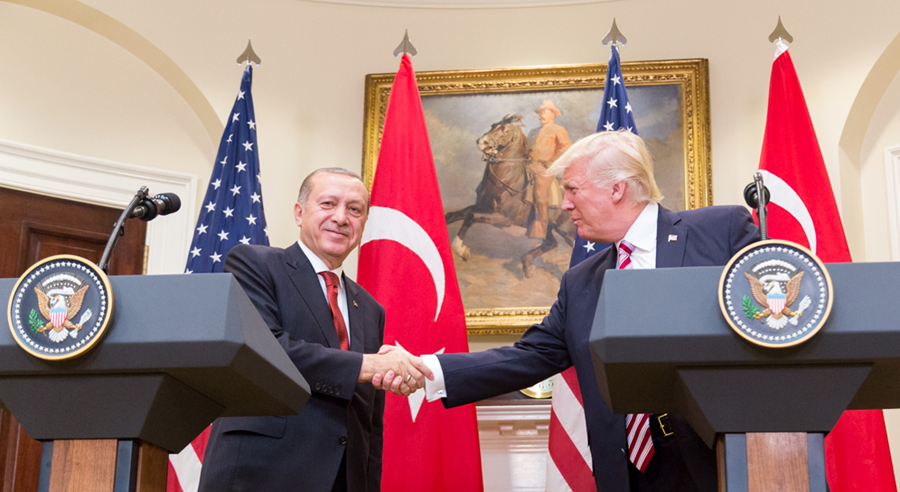 Anytime Pres. Trump talks to another head of state on the phone, we can expect a disastrous outcome. Trump does not realize the consequences of his decisions on the United States and the world. He does not ask for proper briefing from his top aides and does not follow their advice.

Pres. Trump’s telephone conversation with Turkish President Recep Tayyip Erdogan on October 6 was no exception. While the White House reluctantly released the summary of Pres. Trump’s scandalous phone call with the President of Ukraine followed by the whistleblower’s report, Trump’s conversation with Erdogan is not yet made public, and no one knows what exactly transpired during that phone call. All we know is that Erdogan asked Trump to remove U.S. troops from Northern Syria, allowing Turkey to invade Syria, to expel hundreds of thousands of Kurdish civilians from the 20-mile area inside the Syrian border and kill hundreds of Kurds, the US allies on the ground in the fight against ISIS terrorists. The Turkish troops are committing war crimes, and Pres. Trump has allowed them to do so!

The whole world immediately realized this was a grave mistake by Trump. Even Republican members of Congress, who had been blindly supporting him and ignoring his many illegalities and immoralities, have loudly criticized their ‘darling’ President. The US Congress discussed adopting sanctions against Turkey which pressured Trump to do the same.

On October 9, three days after Erdogan’s phone call with Trump, Turkish forces invaded Syria. On that same day, Trump sent Erdogan a childish letter, threatening to “destroy the Turkish economy—and I will.” Trump also warned Erdogan that history “will look upon you forever as the devil if good things don’t happen.” Trump ended his letter by telling Erdogan “don’t be a tough guy. Don’t be a fool! I will call you later.” This was a uniquely stupid presidential letter in the annals of diplomatic correspondence. Pres. Erdogan’s office stated that he promptly dumped Trump’s letter in the garbage can…where it belonged!

In the meantime, in response to strong criticism by almost everyone in the world—except for Turkey, Azerbaijan and Russia—Pres. Trump started spewing his usual nonsense. First, he called the Kurds US allies. He then changed his mind and called them “Communists,” “terrorists” and “no angels.” Trump went so far as blaming the Kurds for not supporting the US army in Normandy, France, during the Second World War, forgetting that the Kurds possessed neither a country nor an army! According to the Washington Post, Pres. Trump has made 13,435 false and misleading claims in his first 1,000 days in office. That’s on average 13 lies per day—an unprecedented record for anyone, let alone the President of the United States!

After undermining the Kurds in his pronouncements, Pres. Trump dispatched his Vice President Mike Pence and Secretary of State Mike Pompeo to Ankara, supposedly to restrain Erdogan’s brutal treatment of Kurds in Northern Syria.

After several hours of negotiations, the two sides made contradictory announcements about what they had agreed upon. The American side called the agreement a “ceasefire,” while the Turkish side called it a “pause” for five days. Nevertheless, Trump quickly claimed to have scored a major victory, as he does on all occasions, usually without any merit. If anything, it was a victory for the Turks who gained everything they wanted from the United States—the green light to proceed with their invasion of Northern Syria, mass deportations and brutal killings of Kurds. What’s worse is the escape of hundreds of ISIS terrorists from their detention camps during the Turkish attack. The ceasefire or the pause did not even last 24 hours! The Turkish forces and their jihadist partners violated it on day one. Only a fool would trust Erdogan’s promises or agreements. Amazingly, Trump agreed to remove the US sanctions against Turkey before they were even implemented.

The removal of the US sanctions was confirmed in a lengthy letter signed by the Turkish and US delegates at the UN, titled “Joint Turkish – US Statement on Northeast Syria” which was submitted to the UN Security Council and the UN Secretary-General on October 17.

In this letter, the US shamelessly capitulated to all of Turkey’s demands:

—“The Turkish side expressed its commitment to ensure safety and well-being of residents of all population centers in the safe zone controlled by the Turkish Forces and reiterated that maximum care will be exercised in order not to cause harm to civilians and civilian infrastructures.”

—“The two sides agreed on the continued importance and functionality of a safe zone in order to address the national security concerns of Turkey, to include the recollection of YPG heavy weapons and the disablement of their fortifications and all other fighting positions.”

—“Once Operation Peace Spring is paused, the US agrees not to pursue further imposition of sanctions under the Executive Order of October 14, 2019, ‘Blocking Property and Suspending Entry of Certain Persons Contributing to the Situation in Syria,’ and will work and consult with Congress, as appropriate, to underline the progress being undertaken to achieve peace and security in Syria, in accordance with UNSCR 2254. Once Operation Peace Spring is halted as per paragraph 11 the current sanctions under the aforementioned Executive Order shall be lifted.”

Interestingly, the text of the US – Turkish agreement never once mentions the Kurds by name, whereas the whole Turkish invasion is being carried out for the purpose of eliminating Kurds from Northern Syria.

The United States forces were stationed in Syria in violation of international law, and contrary to the wishes of the Syrian government. The same applies to the Turkish forces. The departure of the US forces is not wrong. Their arrival was wrong. And Trump’s claim that he wants the US forces out of the Middle East is an outrageous lie, since the same day that he decided to withdraw the American troops from Syria, it was announced that most of these soldiers would be relocated to Iraq and he will send 3,000 fresh US troops to Saudi Arabia. This is yet another one of Trump’s lies which needs to be added to his over 13,000 other lies!