The Armenian Town That Replaced Mining With Sustainable Development 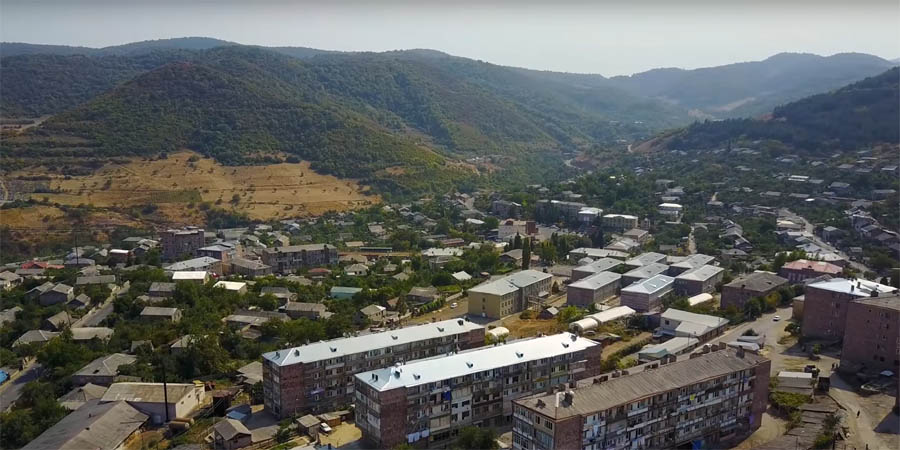 One of the main arguments for the mine has been the claim that it’s necessary for Armenia’s economic development. But residents of Amulsar aren’t the only Armenians who have protested and blocked a mine in their community.

Noyemberyan is a town of farmhouses and Soviet apartment buildings nestled in the lush forested mountains in the north of Tavush province. It seems quiet as you drive down the main street, past the park, the small mterq storefronts and the old cultural center, but it has recently become an outpost of sustainable development and Armenian resistance. The town itself is protected by its geography, but its position near the northern border with Azerbaijan means that many residents and their families and friends grew up in villages under fire. The shooting happens regularly, sometimes daily, and is part of an Azeri campaign to terrorize residents and push them out. Bullets destroy homes, render farms and roads unsafe and leave residents with PTSD.

I was in town to work with Kristin Cass on The New Freedom Fighters, a project documenting the conditions of life in a conflict zone and the area’s female-led nonviolent resistance movement. The Noyemberyantsis I met were determined to stay in their homes, embodying the Armenian spirit of survival and resistance, motivated by a deep love for their homeland and a belief that the country starts at the borders. “I want to show that Noyemberyan isn’t only a place where people live in fear,” said Nune Azizyan. “We have things to show here.”

I met Nune during our tour of the IT center where she had taken a 3-D modeling class that changed her life. She moved to Noyemberyan when she married, giving up her job as an economic manager in Yerevan. She was looking for something to do. “I always want to learn new things,” she said.

After completing the 3D modeling course, Nune teamed up with her former teacher to start VitRoom, making vases and other art objects to sell in Armenia and export to Russia. A powerhouse of energy and enthusiasm, it wasn’t long before our conversation moved from IT projects to her environmental activism in Noyemberyan. Although she is a newcomer to the area, she was quick to fall in love with her community and the land it lives on. She formed an environmental activist group with other locals who were saddened by seeing their beautiful mountain landscapes marred by piles of trash and plastic bottles floating in the river. But her most dramatic moment of activism was in 2018, just as Armenia was on the brink of revolution.

That year, Polymetal Armenia, a member of the Russian Polymetal Group, announced plans to carry out geological prospecting in the Noyemberyan area. Nune was horrified. She had already seen a mine rip a gaping hole in the region’s rich natural landscape, and she and other locals were not willing to let a foreign company desecrate their land again.

“I was pregnant at the time, so I couldn’t go out and protest,” she said. “But I started a petition to say that no, the people of Noyemberyan do not want this. We want to use the land to develop ecotourism instead.”

Nune and other locals promoted their online petition to everyone they could think of; they eventually gathered 2,845 signatures, enough to convince the local government to reject Polymetal’s projects in favor of ecotourism and environmentally sustainable development.

Since their first success, Nune and her fellow activists have been defining their vision for sustainable development and working to make it a reality. Noyemberyan, which is also near Georgia’s border, has a highway that runs through the town, making it a prime location for ecotourism. There are already a few stores, but it needs new ideas to turn it into a full-fledged tourist destination. With this in mind, Nune started the Noyemberyan Tourism Center (NTC). The NTC organizes excursions to the region’s natural and historical sites and promotes tourism in the area. They have already started to host events like the 2018 Armenian Mountain Biking Challenge and are continuing to build infrastructure by organizing excursions and helping locals start B&B’s and guiding services.

The push for tourism came at just the right time. As Nune and other locals began the difficult journey of grassroots development, they were buoyed up by the people-powered energy of the Velvet Revolution. For many, the movement’s initial success gave them the idea that they actually did have the power to make change. As the revolution began to develop into a government, the new government began a huge push for tourism, causing a drastic increase in tourist numbers in the last year. At the same time, another grassroots movement of individuals and NGO’s has started to create a hiking culture in the area, and develop its mountains and natural panoramas for adventure travelers. This movement, like the one in Noyemberyan, is geared towards a small-business model that will not only show off Armenia’s natural wonders and hospitality culture, but also develop and support local economies.

Noyemberyan has taken up on the idea of adventure tourism. Building on local tradition of staying in summer homes up in the mountains, one local has built a state-of-the-art campsite at Surbasar, a holy site high in the mountains. The site has cabins, dining areas, and even horses for tourists to explore the natural beauty of the mountains. The owner of the campsite partnered with Noyemberyan’s Center for Community Development (CCD), an NGO supporting environmentally and economically sustainable projects. The CCD is run by an all-female team and supports initiatives like a cooperative dairy and local job fairs that are an essential piece in letting locals lead their town’s economic development in a way that benefits them and the community as a whole.

Noyemberyan is also a player in the revamping of Armenia’s wine industry, which was almost completely destroyed by the USSR. The Tavush province retained a number of unique indigenous grape varietals, as well as a culture of winemaking. Wine Works, a Yerevan-based winemaking facility producing high-end, quality wines for the US and other markets, has recently taken an interest in the region. They produce wine for companies like Kataro, Keush, Yacoubian-Hobbes and Tus, which takes the ancient  name of the Tavush province and specializes in using the region’s indigenous grapes. The company is working with organizations like OneArmenia to source their grapes from family farms and help farmers transition from subsistence farming to a style geared towards production for sale. Economic transition comes with its challenges, but Wine Works is committed to working with locals and investing in Armenia’s borders.

The wine industry is developing within Tavush as well. Two years ago, an Armenian from Berdavan village who had gone to Russia for work, repatriated with the idea to develop his hometown. He rebuilt the Berdavan Winery, repurposing a facility which had been out of use since the collapse of the Soviet Union. Gagik Aghababyan, the former manager of the Ijevan Winery, was hired as the director. Aghababyan, a Berdavan native, jumped at the possibility to come back and develop his home village. The company has grown tremendously in the last few years, starting major exports of wine, kompot, juice and pickles to Russia. Although the production facilities and tasting room are safe, the vineyards often come under Azeri fire. “My success is everyone’s because of the situation on the border,” said Aghababyan. “We can’t wait for help. Our Armenian people must band together for victory.”

When we met at the Berdavan Winery, he invited us into his tasting room, giving us the full experience of Armenian hospitality that he has created to welcome tourists to Tavush wine country. His tasting room is in a picturesque wood house; his table was full of the company’s wine, preserves and juices. We began Armenian style with a toast…and then another one, and soon he was reminiscing about his history in the wine business. He remembered visiting the Ijevan Winery with his uncle when he was little, and the director telling him that he would be a good winemaker one day. “Winemaking is a special philosophy and an art, not just production,” said Aghababyan, who studied viticulture at the Armenian Agricultural Institute. “We celebrate everything in life with wine, from birth to death. The most important thing is that the doors of a winemaker are always open for guests, to share our life with others.”

The Center for Agribusiness and Rural Development (CARD) has taken another approach to developing the local wine industry. With the help of USAID, CARD is working on creating a wine route of home wineries. The program gives local producers modern equipment and training to improve the quality of their wines and helps them design and build tasting rooms and signage along the road to introduce their winery to tourists. The project allows visitors to get an authentic experience of rural Armenian life and hospitality, as well as the local wine culture. It is also an essential component of grassroots development, helping families start their own self-sufficient businesses, replacing the region’s reliance on charity organizations with opportunities to build a sustainable economy rooted in local land and traditions.

“We have already had tourists stop at our winery on their way from Dilijan to Makaravank,” said Mrs. Davityan, one of the vintners. She treated us to wine, homemade pastries and a performance by her daughter on the shvi flute in her family’s outdoor tasting room.

Nature tours and wine routes may seem like an unlikely form of national defense, but Armenians are thinking outside the box to find ways to thrive in the modern economy. Armenia has been between superpowers for all of its millenia-long history, and initiatives like this are what allow Armenia to continue its tradition of cultural independence and survival and protect the country from foreign attack and exploitation. In the wake of the Amulsar crisis and the show of public opinion in the global climate strike, environmental issues are becoming increasingly urgent all around the world, and we must consider the role they play in the future of our global nation. Development in Noyemberyan is driven by locals, but it includes the participation and support of Armenians around the world.This kind of development has enormous potential, and we must continue thinking creatively, using the platforms and resources available to us to support this future.

Araxie Cass is a member of the AYF Chicago Ararat Chapter, as well as a student of Creative Writing and Near Eastern Languages and Civilizations at the University of Chicago. Her work includes creative non-fiction and short stories, focusing on Armenian topics, as well as social justice, culture and community.