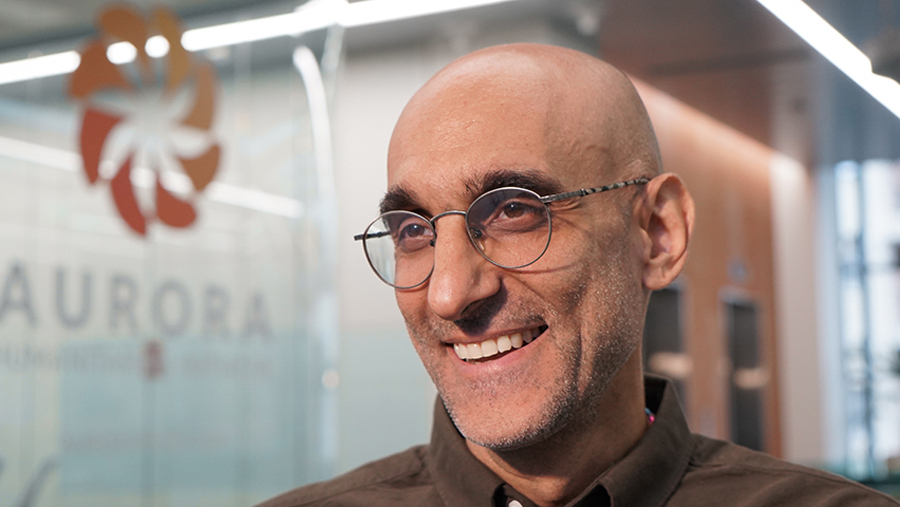 12 December 2018 – The Co-Founders of the Aurora Humanitarian Initiative have announced Dr. Tom Catena, an American physician and Catholic missionary from Amsterdam, New York has joined the organisation as Chair.

The appointment was announced during the Aurora Dialogues in Berlin. Dr. Catena joins the organization during a period of significant growth and will be responsible for engaging key humanitarian stakeholders, working with global partners and overseeing Aurora’s educational and outreach projects, including the internationally recognised, Aurora Prize. Aurora was established three years ago, and has impacted the lives of displaced individuals, children in conflict zones, refugees, migrants and vulnerable citizens around the world. Since 2016, the Aurora Prize has awarded over $3.3 million to unsung heroes and has supported 23 projects in 11 areas of humanitarian assistance globally. This year, the Aurora Prize supported over 375,000 Rohingya refugees. A further 62 students from conflict areas have been recipients of the Aurora Gratitude Scholarships program to study at United World Colleges around the world and the American University of Armenia.

In May 2017, Dr. Catena was named as the Aurora Prize Laureate for his courageous work in the Nuba Mountains. Since 2008, he has served more than half a million people as the sole surgeon at the Mother of Mercy Hospital, an institution he has been dedicated to since. He has been based in Sudan’s war-ravaged territory for the last decade where humanitarian aid is restricted. Known as “Dr Tom” by locals, he provides treatment for people suffering ailments and war wounds. He will continue his role as Medical Director at the hospital working with a team of doctors, sourced by the Catholic Medical Mission Board in cooperation with the African Mission Healthcare Foundation, to work in the Nuba Mountains in parallel with his new responsibilities with the Aurora Humanitarian Initiative.

According to a joint statement from the Co-Founders of the Aurora Humanitarian Initiative: “We are delighted to welcome the first Chair of the organisation. Dr. Tom Catena truly embodies the spirit of Aurora and will be a driving force in taking our global vision forward by helping to empower individuals to embrace our shared humanity and express gratitude to those making an impact. It is gratifying that the 2017 Aurora Prize Laureate is also the first chair of this organization.”

Dr. Tom Catena, the new Chair of the Aurora Humanitarian Initiative said: “It is a true honour to chair the Aurora Humanitarian Initiative – I am grateful for the impact of the Aurora Prize on my life and the financial support provided to the Mother of Mercy Hospital that has helped transform the lives of the Nuba people in Sudan. I believe in the simple yet powerful force of humanity in addressing today’s critical humanitarian challenges and will remain committed to elevating the Gratitude in Action philosophy in my new role by supporting Aurora’s work empowering those in desperate need to create their own futures.”

In 2015, Dr. Catena was recognized by Time Magazine as one of its ‘100 Most Influential People’ in the world. He has been recognized with Honorary Doctorates from Brown University and Yerevan State Medical University. He also formerly served as a flight surgeon with the US Navy.

As part of the leadership team changes at Aurora, the Executive Board has also appointed Dr. Hayk Demoyan, former Director of the Armenian Genocide Museum-Institute as the Chief Operating Officer of the Initiative. He started this position on 19 November 2018. Dr. Hayk Demoyan is author of numerous monographs and academic articles published in Armenian, Russian, English and French. From 2011 to 2015 he was appointed as a Secretary of the State Commission for Commemoration of the Armenian Genocide centennial.

About the Aurora Humanitarian Initiative

Further information is available at www.auroraprize.com

In his role as Aurora Chair, Dr. Catena engages with politicians, humanitarian organisations, practitioners, and everyday people around the world to spread the message of Gratitude in Action.

Founder of the Mother Mercy Hospital in Sudan’s war-ravaged Nuba mountains, Dr. Catena has dedicated the last decade of his life to providing medical care as the only surgeon permanently based in a region the size of Austria.

Despite an effective embargo on humanitarian supplies, the withdrawal of other NGOs, and the constant threat of air raids on the hospital, Dr. Catena provides treatment for more than 750,000 people suffering ailments from malnourishment and typhoid, to cancer and war wounds.

A graduate of Duke University’s School of Medicine, Dr. Catena began his medical career in the United States Navy, serving four years as a flight surgeon.

Following his residency, Dr. Catena spent six years as a volunteer at St. Mary’s Hospital in Nairobi, Kenya, before moving to Sudan to cofound the hospital he still leads.

He is the recipient of Honorary Doctorates from Brown University (2016) and Yerevan State Medical University (2017), and was named one of the 100 most influential people by Time magazine in 2015.

Tom Catena was appointed Aurora’s inaugural Chair in December 2018, a position he maintains in parallel with his ongoing responsibilities as Medical Director of the Mother Mercy Hospital in Sudan.