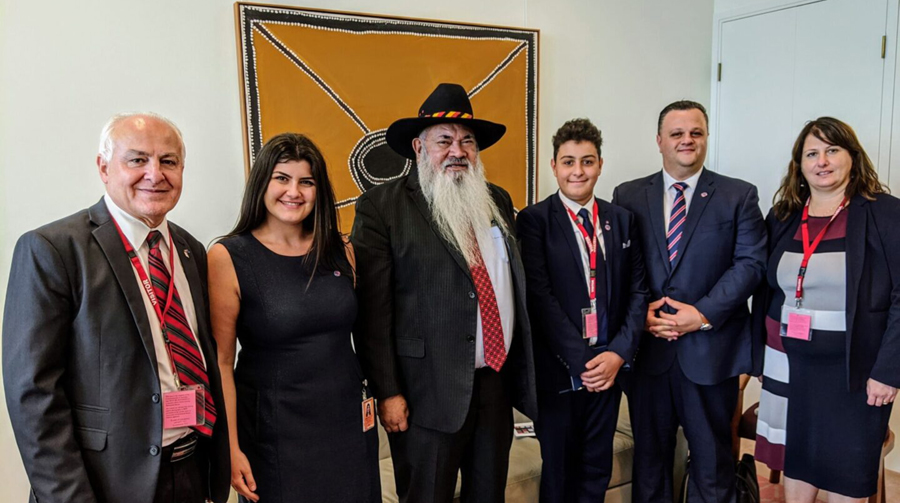 The February 2020 launch of the Joint Justice Initiative at Australia’s Parliament House featured the signing of a Memorandum of Understanding by the Armenian National Committee of Australia (ANC-AU), Assyrian Universal Alliance (AUA) and Australian Hellenic Council (AHC), which declares Australia’s recognition of the Armenian, Assyrian and Greek Genocides as a priority on behalf of their communities.

Elected to the Federal Senate in 2016, Dodson’s pre-parliamentary career included various roles defending the human rights of indigenous Australians, including as Chair of the Council for Aboriginal Reconciliation and Commissioner into Aboriginal Deaths in Custody.

In February 2020, the Western Australian met a Joint Justice Initiative delegation of advocates representing Armenian-Australians, Assyrian-Australians and Greek-Australians. In May, he signed the Affirmation of Support.

“Senator Pat Dodson has an unimpeachable record in defence of the human rights of indigenous Australians, and we are honoured to have his support as we strive for Australian recognition of the genocides committed by Ottoman Turkey against the region’s indigenous Armenians, Assyrians and Greeks,” said Armenian National Committee of Australia (ANC-AU) Executive Director, Haig Kayserian.

On 25th February 2020, over 100 Federal Australian parliamentarians, diplomats, departmental officials, political staffers, academics, media and community leaders were treated to cultural performances, food, wine and brandy, as well as the historic signing of a Memorandum of Understanding, which affirmed that the signatory public affairs representatives of the three communities were jointly committed to seeing Australia recognise the Turkish-committed Genocide against the Armenian, Greek and Assyrian citizens of the Ottoman Empire during World War I.