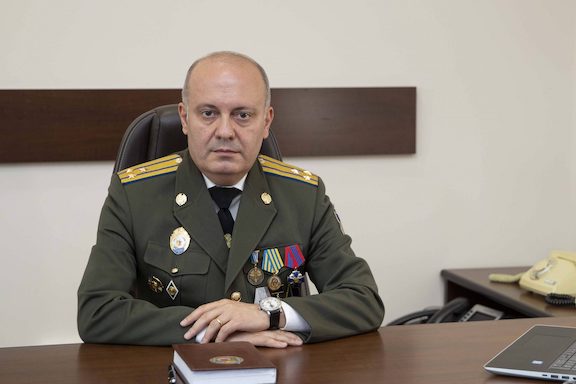 YEREVAN – A former official who ran Armenia’s National Security Service during the recent war in Nagorno-Karabakh has hit out at Prime Minister Nikol Pashinyan, saying that he could have stopped hostilities three weeks before the ceasefire brokered by Russia on November 9.

Mikael Hambardzumyan was appointed as acting head of the NSS on October 8 eleven days after Azerbaijan launched offensive military operations in and around Karabakh. Pashinyan replaced him by another senior NSS officer, Armen Abazyan, one month later.

In an interview with the Fifth Channel TV station aired late on Monday, Hambardzumian claimed that he himself decided to leave Armenia’s most powerful security service because of Pashinyan’s handling of the war. He singled out the prime minister’s failure to accept a more favorable ceasefire agreement which was negotiated by Russian President Vladimir Putin on October 20.

In televised remarks on November 17, Putin said that the Armenian side would have suffered fewer territorial losses and, in particular, retained control of the strategic Karabakh town of Shushi (Shusha) had Pashinyan agreed to that deal accepted by Azerbaijan. He said he was taken aback by Pashinyan’s stance.

Pashinyan explained afterwards that he rejected the proposed truce because it called for the return of Azerbaijani refugees to Shushi. He claimed that that too would have restored Azerbaijani control of the town.

“I was informed about [Putin’s] proposals not by the prime minister but by my colleagues,” said Hambardzumyan. “I obviously wondered why we are not taking that step and what keeps us from doing that. After all, it was the only real opportunity to stop the war and suffer fewer human and territorial losses.”

According to Hambardzumyan, during an October 19 meeting of Armenia’s Security Council the chief of the Armenian army’s General Staff, General Onik Gasparyan, warned Pashinyan that the Armenian side is heading for defeat and that the war must be stopped as soon as possible. He said then Defense Minister Davit Tonoyan echoed that warning.

“Nevertheless, such a decision was not made [by Pashinyan] after that,” added the former NSS chief.

During the six-week war Azerbaijan recaptured four of the seven districts around Karabakh which had been occupied by Karabakh Armenian forces in the early 1990s. Baku agreed to stop its military operations on November 10 in return for an Armenian pledge to withdraw from the three other districts.

The Armenian opposition has blamed Pashinyan for the defeat and demanded his resignation. Opposition leaders have portrayed Putin’s revelation as further proof of the prime minister’s mishandling of the war that killed at least 3,300 Armenian soldiers.

Hambardzumyan added his voice to the opposition demands shortly after his sacking. He was also among two dozen retired NSS officers who issued in December a joint statement calling for Pashinyan’s resignation. The prime minister has repeatedly refused to quit.