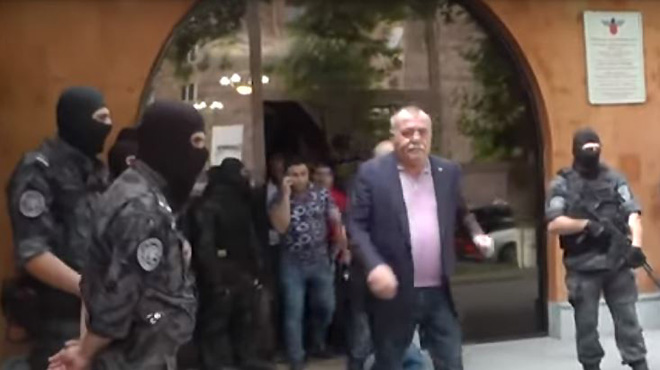 ARMENPRESS. Member of Parliament from the Republican Party faction Manvel Grigoryan, the chairman of the Yerkrapah Volunteers Union, has been escorted out from the union’s office in Ejmiatsin city (Vagharshapat) by national security service (NSS) agents.

Grigoryan exited the building escorted by NSS agents and left the area in a vehicle. Fellow MP from the same faction Seyran Saroyan was also with Grigoryan. Saroyan initially wanted to go with Grigoryan in the same car, but agents didn’t allow it.

One of the NSS agents told Saroyan to ride along in another vehicle.

When the vehicle carrying Grigoryan was about to leave, a woman was attempting to block its way by standing in front of it. The NSS agents pulled her away and the vehicle left the area.

An NSS spokesperson refused to specify where the two MPs were taken. “We will issue a statement within the day with a clarification”, spokesperson Samson Galstyan said.