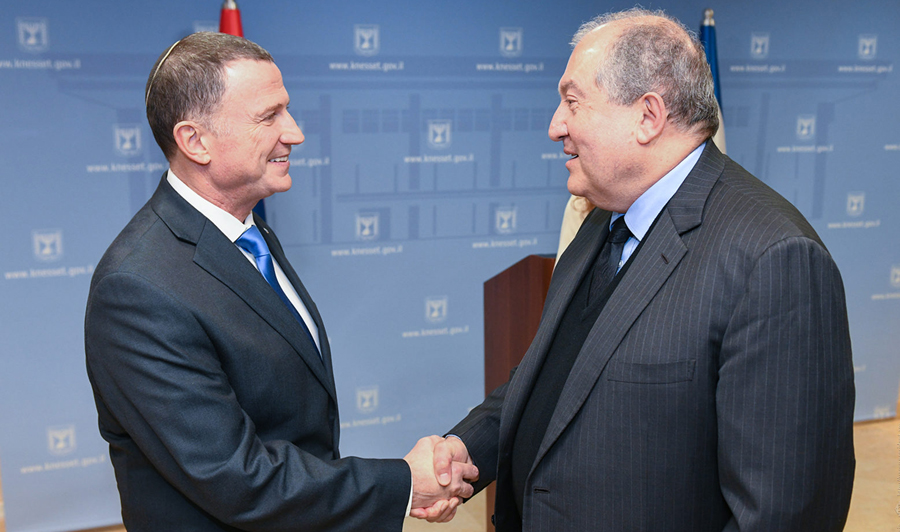 Welcoming the President of Armenia, the President of the Knesset in particular noted: “It is a great honor for us to receive you in our country. We’re happy for your visit, even if it happens for a less-than-joyful event.”

Julie Edelstein expressed confidence that President Sarkissian’s visit, as well as the opening of an embassy in Israel, will be an important cornerstone for further development of bilateral relations.

“I think this visit will bring a very positive change in our relations,” the Knesset Speakir said, noting that there is a huge untapped potential.

President Sarkissian noted that he has been at the forefront of establishing diplomatic relations with Israel. “To be honest, I have wanted to return to Israel for years because I have memories from this country,” the Armenian President said, highlighting Israel’s experience in various fields, including high technology, innovation, and exchange of experience.

The President said the similarities between the fates of the two peoples are impressive, and prompt us to think about the future.

“We can jointly create that future both as two states and as two peoples. Armenia is a small country, but a world nation, so as Israel. I am also here to identify areas of cooperation. Armenia attaches great importance to the development of many fields: education, science, security, agriculture, modern technologies. As president, I have an initiative to make Armenia a new technology hub, as we have a number of advantages to do so. There are highly skilled physicists, mathematicians in our country, we have good educational programs in the field of programming,”Armen Sarkissian stated.

Noting that many pages of history are tragic for the Armenian and Jewish people, President Sarkisssian said efforts should be made to ensure that such humanitarian catastrophes would never be repeated.

The Armenian President raised the issue of the Armenian Genocide recognition by the Israeli Knesset, stressing that recognition and condemnation of this shameful page of history should not be conditioned by today’s political interests and realities.

“Recognition of the Armenian Genocide is first of all a moral responsibility and a tribute to the memory of innocent victims, while it is an important contribution to the international efforts to prevent genocides and crimes against humanity,” he stressed.

At the end of the visit, the President of Armenia left a note in the guestbook. Afterwards, President Sarkissian and Mrs. Nune Sarkissian toured the parliament building.