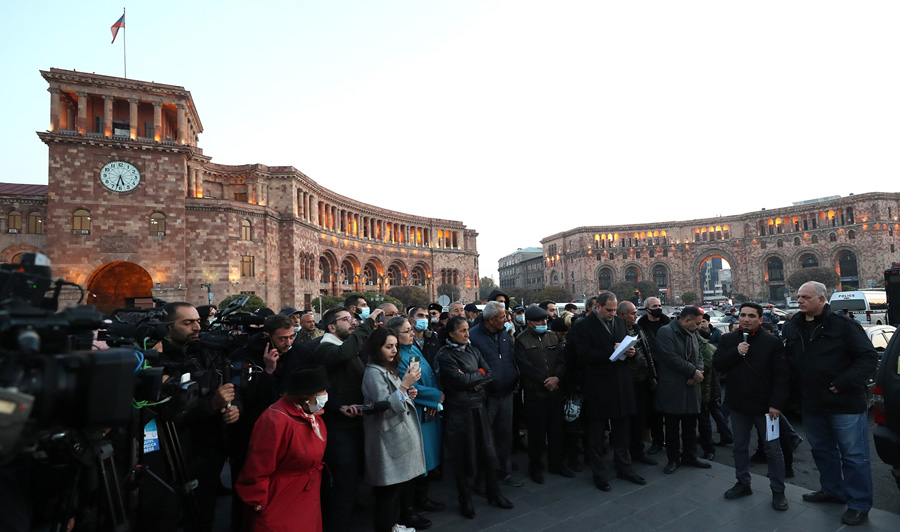 Armradio – Protesters in Armenia’s capital Yerevan are demanding from the government not to sign any document on delimitation and demarcation of the Armenian-Azerbaijani border and not to provide a “corridor” to Azerbaijan.

The participants of the rally also demand to fully equip the frontline and defend the territorial integrity of the Republic of Armenia.

Protesters blocked traffic in Yerevan on Monday to urge the government to take a tougher stance amid tensions with neighboring Azerbaijan. The Police said 18 people were detained.

At 2 pm the organizers handed over an application to the government, demanding to publicize the content of the proposed document on demarcation.

The participants of the rally have now gathered in the Republic Square. They say the rallies will be continuous and will be held every day.

The protests come after Prime Minister Nikol Pashinyan said at the government sitting last week that the Russian side had submitted a new proposal on delimitation and demarcation of the border, which, he said, was acceptable to the Armenian side.

Meanwhile, the Prime Minister has stated on many occasions that Armenia has not discussed and will not discuss anything within the “corridor logic.”