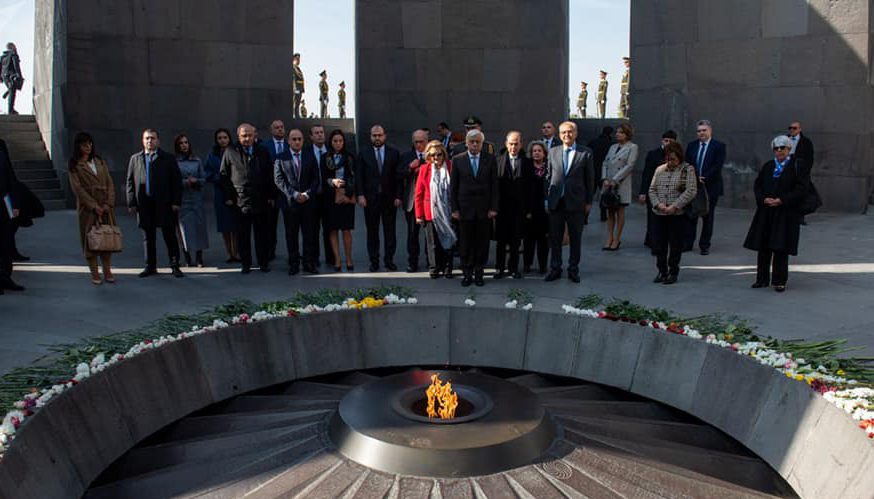 The President of Greece was accompanied by Minister of Environment Eric Grigoryan, Deputy Mayor of Yerevan Hayk Sargsyan, Ambassador Extraordinary and Plenipotentiary of the Republic of Armenia to Greece Fadey Charchoghlyan, Ambassador Extraordinary and Plenipotentiary of Greece to the Republic of Armenia Mrs. Nafsika Nancy Eva Vrayla.

The guests were greeted by Harutyun Minasyan, Director of the Armenian Genocide Memorial-Institute.

The Greek President laid a wreath at the monument to the victims of the Armenian Genocide and flowers at the eternal fire.

The Greek delegation also visited the Armenian Genocide Museum, where they were briefed on the museum exhibition. At the end of the visit, the Greek President made a note in the Commemoration Book.

Speaking to reporters, Mr. Pavlopoulos said “the memory of the Armenian Genocide must be preserved, because if genocides are forgotten, crimes will be repeated again. This is a message to everyone from Yerevan.”

“We see similar events happening in the world, and there are people who are hostile to humanity and civilization. We have survived the same horror as the Armenians. I am very grateful to the President and Government of the Republic of Armenia for hosting us, as the Armenian-Greek relations have a long history and we must preserve this common memory,” the President added. President Procopius Pavlopoulos of Greece planted a fir tree in the Memory Alley.