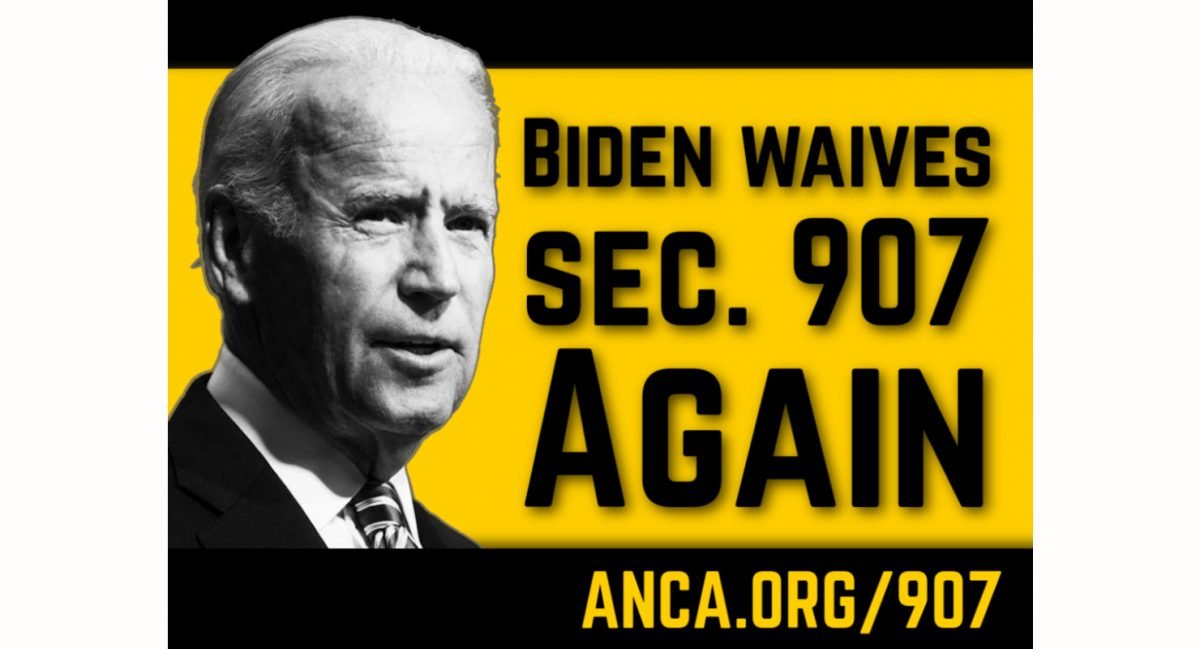 WASHINGTON, DC – Despite ongoing Azerbaijani aggression against Armenia and Artsakh, President Joe Biden has, yet again, waived Section 907 restrictions on US aid to Azerbaijan, clearing the way for continued US assistance to the corrupt, anti-Armenian Aliyev regime, reported the Armenian National Committee of America (ANCA).

The ANCA has been running an online campaign urging President Biden and Congress to maintain section 907 restrictions on US aid to Azerbaijan.

During his run for office, on October 14th, 2020, then-candidate Biden stated that the United States must “fully implement and not waive requirements under Section 907 of the Freedom Support Act to stop the flow of military equipment to Azerbaijian.” As President, he first reversed his position on the issue on April 23, 2021 – on the eve of his historic announcement properly recognizing the Armenian Genocide. “American recognition of the Armenian Genocide comes with responsibilities, among them, not arming or abetting Azerbaijan’s drive to complete this crime,” commented Hamparian at the time. “Any action by President Biden that green-lights US aid to the Aliyev regime runs counter to his clear stand and, more profoundly, the spirit of his recent recognition of the Armenian Genocide.”

Section 907, enacted in 1992, establishes statutory restrictions on US assistance to the Government of Azerbaijan “until the President determines, and so reports to the Congress, that the Government of Azerbaijan is taking demonstrable steps to cease all blockades and other offensive uses of force against Armenia and Nagorno-Karabakh.” Congress included a Section 907 waiver in the FY2002 Foreign Operations, Export Financing, and Related Programs Appropriations Act. US presidents – Republican and Democrat – have waived Section 907 annually ever since.

The Section 907 waiver and subsequent extensions require a number of certifications, including that granting the waiver “will not undermine or hamper ongoing efforts to negotiate a peaceful settlement between Armenia and Azerbaijan or be used for offensive purposes against Armenia.”

A US Government Accountability Office (GAO) report, issued earlier this year, revealed that the State Department consistently failed to inform Congress of the impact of over $164 million in assistance to Baku on the military balance between Azerbaijan and Armenia.

“In fiscal years 2014 through 2021, State’s reporting to Congress did not address some required elements, such as the impact of proposed assistance on the military balance between Azerbaijan and Armenia,” asserts the GAO report. “State’s 2021 guidance to agencies did not provide detailed instructions about the information required for its reporting to Congress. Unless State takes steps to ensure its reporting addresses all required elements, Congress may lack important information about US assistance to the government of Azerbaijan.”

The GAO report went further, to explain that State and DOD, from fiscal year 2014 to 2020, “did not document how they determined that their programs would not be used for offensive purposes against Armenia.” While program-level considerations of the waiver provision are not statutorily required, documenting such considerations would help ensure State’s access to quality information to support its certification of the waiver extension and its related reporting to Congress, explains the report.

According to the GAO, the US has provided about $808 million in overall US aid to Azerbaijan in fiscal years 2002 through 2020.