Pope Francis holds meeting with His Holiness Aram I, other Christian leaders of Lebanon 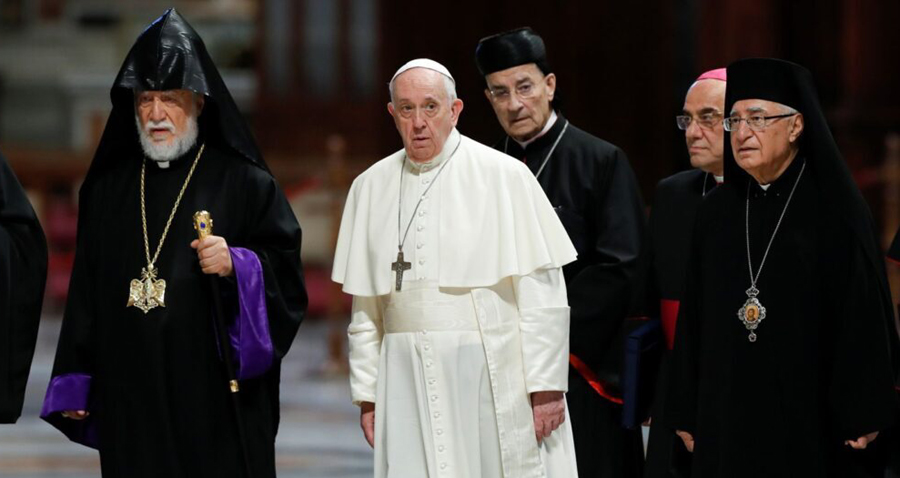 Pope Francis and Lebanon’s Christian leaders began a summit on Thursday to discuss how religion can help the country overcome its worst crisis since its civil war ended in 1990, Reuters reports.

Pope Francis held a meeting with Aram I, Catholicos of Cilicia of the Armenians, Cardinal Bechara Boutros, Maronite Patriarch of Antioch and All the East, and other Lebanon’s Christian leaders to discuss the country’s crisis.

Francis and the patriarchs of Lebanon’s various Christian groups walked from the Santa Marta residence where he lives into St. Peter’s Basilica.

The pope, dressed in his white cassock, and the leaders, dressed in black, lit candles and prayed before the tomb of St. Peter under the basilica’s main altar.

The Maronite, Greek Orthodox, Armenian, Syrian Orthodox and Protestant Churches were among those represented.

From the Basilica, the pope and the patriarchs moved to the Clementine Hall in the Vatican’s Apostolic Palace for a day of primate meetings. A public ceremony, including a closing addressed by the pope was due to start on Friday afternoon.

Francis has said he wants to visit Lebanon, but wants fractious politicians to agree on a new government.