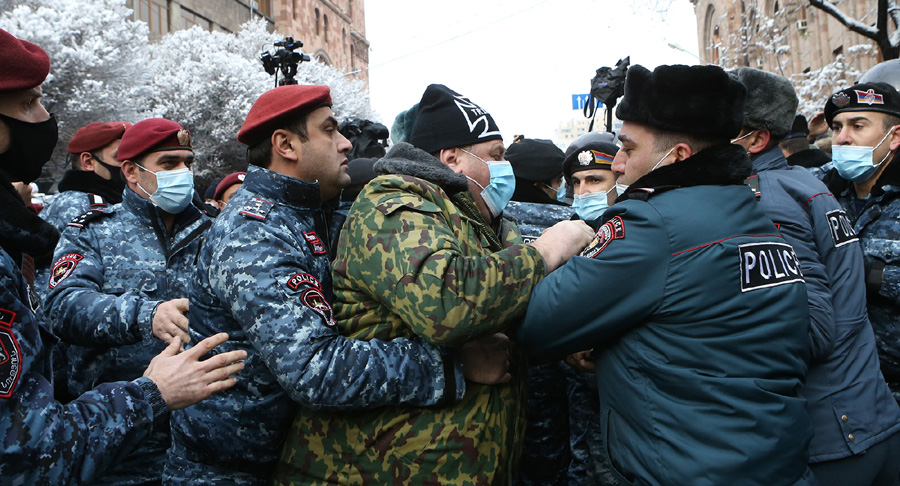 Armenia’s police on Thursday brutally beat, shoved and dragged opposition protesters, who were gathered at Armenia’s government building as they continued to demand the resignation of Prime Minister Nikol Pashinyan, blaming him for signing the November 9 agreement that ended the war, but stipulated the surrender of territories in Artsakh and Armenia to Azerbaijan.

Police officers barricaded and formed a human shield in front of the Armenian government building in Yerevan where protesters gathered as the government was in session.

Ministers apparently had entered the building from other entrances, because the protesters kept the main door to the building was closed for more than five hours.

The police then used unprecedented force against the protesters, pushing and shoving, and in some instances beating.

During the confrontation with the police, five women were injured. Police arrested 69 activists, among them the son of Artsakh War Hero Shahen Meghryan, Zinavor, as well as Sako Minoyan an AYF and ARF Shant Student Association activist from Los Angeles who was beaten and sustained injuries to his face and nose.

“Syunik is not as well guarded as this despicable traitor is,” said Armenian Revolutionary Federation leader Gegham Manukyan, referring to Pashinyan, as well as the heavy armed police presence, saying the law enforcement officials “should think about that.”

The ARF is part of a coalition of 16 opposition parties that have banned together to demand Pashinyan’s resignation and have called for snap parliamentary elections, which would be administered by a national accord government. This National Salvation Movement has chosen Armenia’s first prime minister Vazken Manukyan to their candidate for Armenia’s premiership.

Thousands joined the movement on Tuesday during a day-long strike, which saw people from varied walks of life joining in the protest, which was taking place a day after Pashinyan was forced to cut his visit to the Syunik Province short because protesters had blocked the roadway leading to the cities of Kapan, Goris and Meghri. The Mayor of Goris, Arush Arushanyan, one of the organizers of the protest in Syunik was arrested early Monday morning for saying in a social media post that Pashinyan was not welcome in the province after key positions along in Armenia-proper were forced to be surrendered to Azerbaijan as a direct ramification of the November 9 agreement.

The wave of those calling for the prime minister’s resignation grew on Thursday when 130 professors and staff members of Yerevan’s Brusov State University of Languages and Social Sciences issued a statement calling for Pashinyan’s resignation, saying the current government is unable to confront the challenges facing Armenia because of the November 9 agreement.
“We, the representatives of a higher education institution, are responsible for educating the patriotic generation and we cannot be indifferent to the political situation and the moral atmosphere in the country,” the statement added.