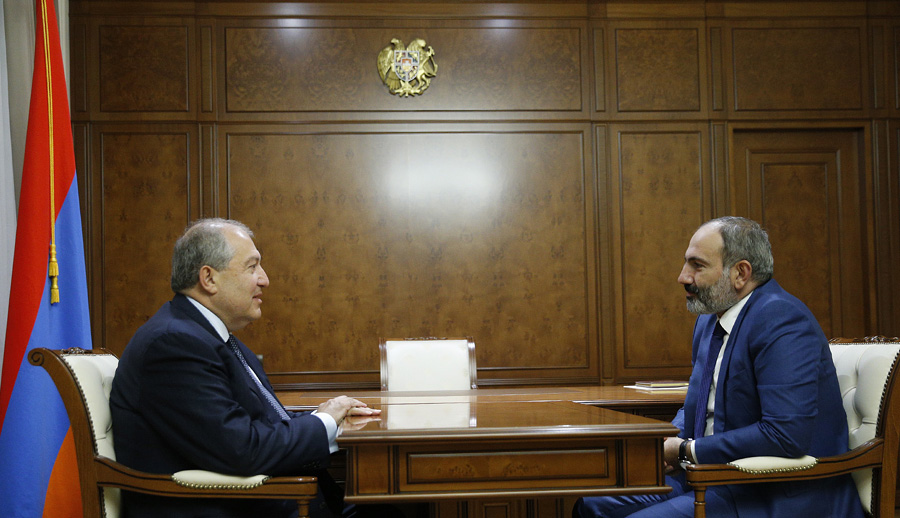 As ARMENPRESS was informed from the official website of the Prime Minister of Armenia, the domestic political situation and developments in Armenia, including issues referring to the holding of early parliamentary elections were discussed.

President of Armenia Armen Sarkissian said, “We had agreed during our telephone conversations, as well as our meeting in Paris that we should meet. I have already met with Mr. Babloyan and I would like to discuss the domestic political situation with you”.

PM Pashinyan said, “It’s really very important that we discuss this issue also with the President of the Republic. In fact, I can say now that in the recent days a number of developments take place, which seem to lead to a solution. Particularly, we signed a memorandum with the President of the Prosperous Armenia Party Gagik Tsarukyan on holding early parliamentary elections in December and another 16 MPs have supported that idea in a written form.  I think that the process has taken the direction of de-escalation, which is positive”.

President Armen Sarkissian said, “I am also very happy that the process goes on in the atmosphere of dialogue and tolerance. I am happy to hear that during the last 1-2 days some results have been achieved through negotiations and dialogue and that probably the solution is not far away. It’s very important that the problem is really solved”.