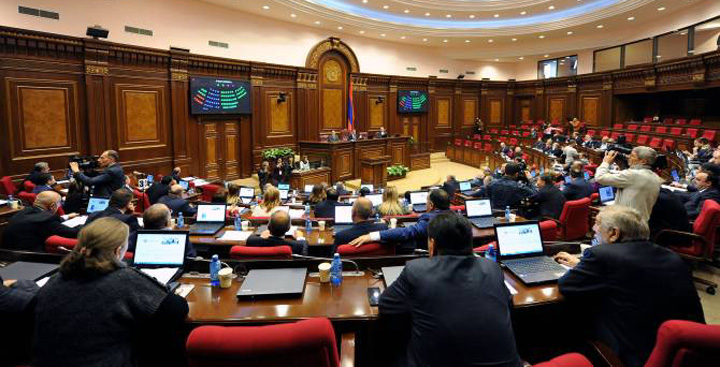 ARMENPRESS. The parliament of Armenia will convene an extraordinary sitting on June 19 to debate stripping MP Manvel Grigoryan of immunity.

The decision to convene a sitting was made today at a Cabinet meeting.

The sitting will begin 11:00 Tuesday.

The National Security Service (NSS) of Armenia has released details over the arrest of Member of Parliament Manvel Grigoryan and the evidences discovered in the lawmaker’s properties.  Grigoryan was placed under arrest on June 16.

The NSS said agents searched Grigoryan’s compound in the village of Arshaluys in Armavir province on June 16, and his mansion in Ejmiatsin city (Vagharshapat) within the framework of an ongoing criminal case.

NSS said agents discovered an arsenal and a collection of dozens of both vintage and modern vehicles in Grigoryan’s Arshaluys compound. The compound was also used to store military canned food, medication and military uniforms. NSS said the boxes which were supposed to be delivered to soldiers, contained letters addressed to servicemen, which shows that it was aid sent to frontline soldiers in Artsakh during the 2016 April 4-day war days.

NSS said it is investigating how the military clothing, medicine and other discoveries have appeared in the MP’s compound.

Various kinds of foodstuffs – aid sent from kindergartens and schools to soldiers – have been discovered stored in the compound, NSS said.

NSS said it also found foodstuffs labeled “For Soldier” – a special production supplied to the defense ministry which is not available for sale or any other use.

The huge amount of weapons and ammunition found in MP Grigoryan’s compound in the village included more than a dozen anti-tank grenade launchers, 20 hand grenades, over 20,000 various caliber rounds, TNT explosives, and many other types of weapons.

Weapons have also been found in the Ejmiatsin mansion, namely 79 rifles, 39 handguns and over 12,000 rounds.

Dozens of property ownership licenses have also been found.

The collection of vehicles includes motorcycles and snowmobiles, NSS said.

The NSS said they also discovered SUVs and an ambulance vehicle which were designated to be used in the military during the 4-day war. The vehicles were donated to the Defense Army of Artsakh by representatives of the Armenian community of Russia, and Grigoryan has misappropriated them, according to the NSS.

NSS said it also discovered a private zoo in the premises of the mansion, with bears and a tiger among the animals. The mansion also has a horse track. According to information, Grigoryan has used the military food which was supposed to go to soldiers of the 4-day war to feed the animals of his private zoo.

The NSS said the investigation continues and additional information will be provided.

On June 17, Prosecutor General Arthur Davtyan transferred the investigation from the national security service to the special investigations service. He also tasked to form a task force from detectives of both services.

Thus, the Prosecutor General applied to Prime Minister Nikol Pashinyan to request the parliament on behalf of the government to convene an extraordinary sitting to debate the motion.