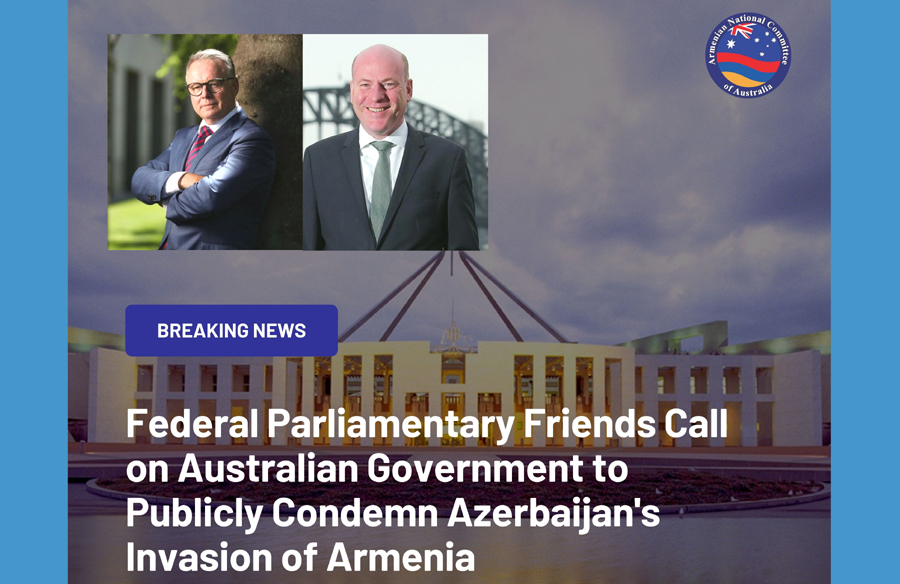 The co-convenors of the Federal Australia-Armenia Inter-Parliamentary Union (Friendship Group), Trent Zimmerman MP and Joel Fitzgibbon MP have appealed to the Minister for Foreign Affairs, Senator the Hon. Marise Payne to release a statement regarding Azerbaijan’s ongoing invasion of the Republic of Armenia, reported the Armenian National Committee of Australia (ANC-AU).

The letter co-signed by Zimmerman and Fitzgibbon, who are also members of the Australian Friends of Artsakh network, read: “We write to express our concern over the incursion of Azerbaijani forces into Armenian sovereign territory.”

“We appeal to the Australian government to similarly express its concern and to take every available opportunity to call for a withdrawal of Azerbaijani troops.”

“We further ask the Australian government to work with the international community to secure an end to Azerbaijani aggression towards the people of Armenia,” the statement added.

Azerbaijan’s invasion has so far killed one Armenian serviceman defending his country’s sovereign borders and led to the illegal capture of several others. Despite international calls, these hostages have not yet been released by Baku, in addition to some 200 POWs who were captured during the 2020 Artsakh War and are yet to be returned under the terms of November’s ceasefire agreement.

The letter calls on Foreign Minister Payne to condemn the provocative actions of Azerbaijan and calls for the withdrawal of Azerbaijani military personnel and cessation of all aggression towards the people of Armenia, which are sentiments shared by several prominent international leaders, including the President of France Emmanuel Macron, U.S. Senate Foreign Relations Committee Chairman Bob Menendez, China’s Deputy Foreign Minister Le Yucheng, the Canadian Foreign Ministry, the OSCE Minsk Group Co-Chairs and the European Union.
“Australia must join many in the international community who have publicly condemned the ongoing hostility of the Azerbaijani regime, which has consistently proven since beginning their September 2020 offensive against Artsakh, that it has no intentions to bring peace in the South Caucasus,” said ANC-AU Executive Director, Haig Kayserian.

“Azerbaijan has not returned Armenian prisoners of war like they signed they would in November 2020, they have not stopped their advance like that famous agreement stipulates, and instead, they have entered the internationally recognised borders of the Republic of Armenia, capitalising on the impunity offered by the international community.”

“We thank Mr. Trent Zimmerman and Mr. Joel Fitzgibbon for holding dictator Aliyev to account and demanding Australia speaks to the values of justice and human rights that this nation was built on,” Kayserian added.

Earlier in June 2021, Shadow Minister for Foreign Affairs, Senator Penny Wong questioned Australia’s Foreign Minister Marise Payne and Department of Foreign Affairs & Trade (DFAT) officials if there was “an active decision not to” release a public statement condemning Azerbaijan’s continuing invasion of the sovereign territories of the Republic of Armenia.