MPP Aris Babikian’s Letter to the Prime Minister of Canada 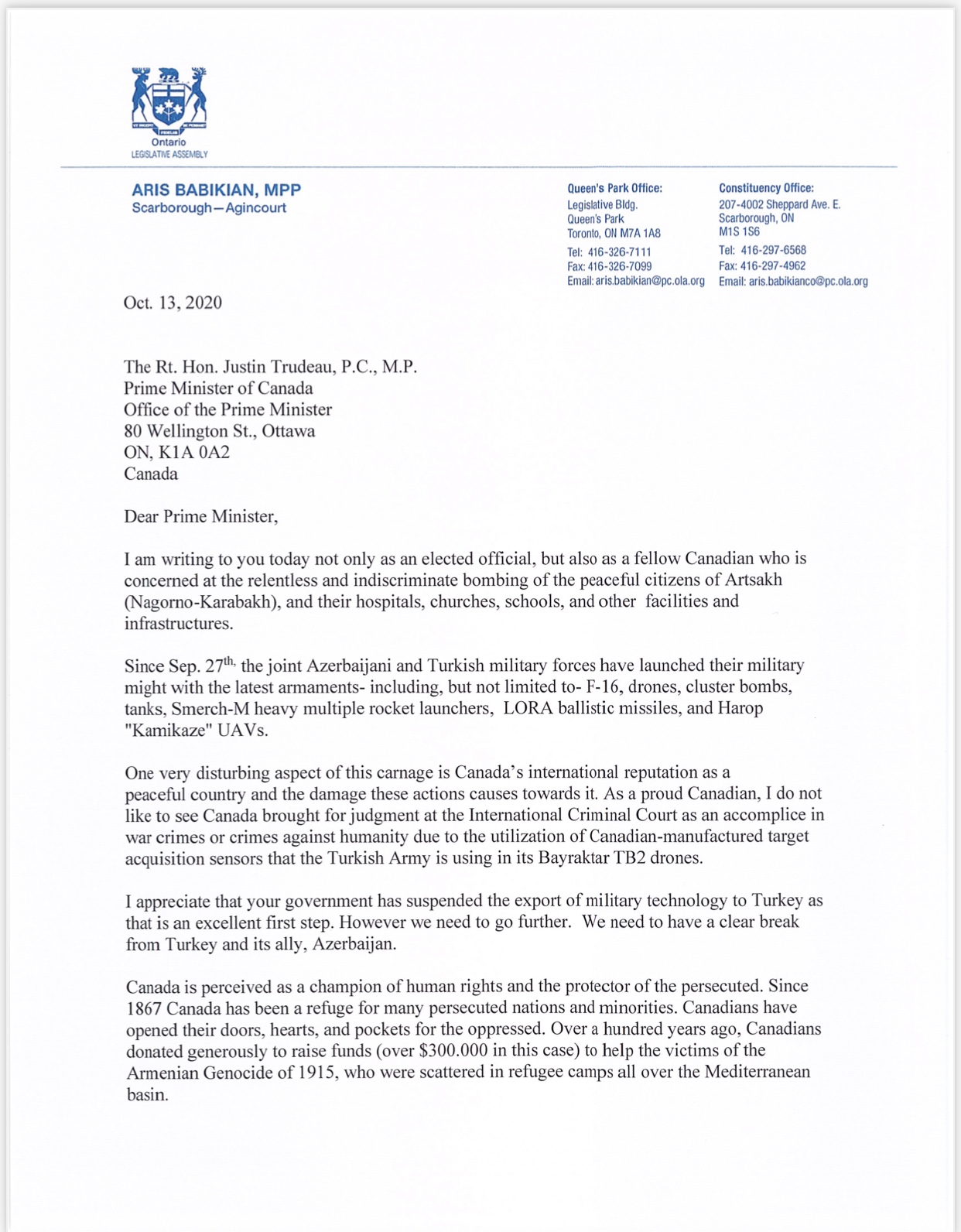 Office of the Prime Minister

I am writing to you today not only as an elected official, but also as a fellow Canadian who is  concerned at the relentless and indiscriminate bombing of the peaceful citizens of Artsakh (Nagorno-Karabakh), and their hospitals, churches, schools, and other  facilities and infrastructures.

Since Sep. 27th, the joint Azerbaijani and Turkish military forces have launched their military might with the latest armaments- including, but not limited to- F-16, drones, cluster bombs, tanks, Smerch-M heavy multiple rocket launchers,  LORA ballistic missiles, and Harop “Kamikaze” UAVs.

One very disturbing aspect of this carnage is Canada’s international reputation as a peaceful country and the damage these actions causes towards it. As a proud Canadian, I do not like to see Canada brought for judgment at the International Criminal Court as an accomplice in war crimes or crimes against humanity due to the utilization of Canadian-manufactured target acquisition sensors that the Turkish Army is using in its Bayraktar TB2 drones.

I appreciate that your government has suspended the export of military technology to Turkey as that is an excellent first step. However we need to go further.  We need to have a clear break from Turkey and its ally, Azerbaijan.

Canada is perceived as a champion of human rights and the protector of the persecuted. Since 1867 Canada has been a refuge for many persecuted nations and minorities. Canadians have opened their doors, hearts, and pockets for the oppressed. Over a hundred years ago, Canadians donated generously to raise funds (over $300.000 in this case) to help the victims of the Armenian Genocide of 1915, who were scattered in refugee camps all over the Mediterranean basin.

Furthermore, Canadians launched a trail-blazing initiative by providing shelter in Georgetown to over 120 orphaned boys and girls, giving them a new lease on life.

More recently, your government helped tens of thousands of Syrian and Iraqi refugees, including Armenians, find refuge in Canada. These highly-appreciated values are what made Canada the envy of the world and the best country to live, work, and raise a family.

As Canadians it is our obligation to uphold the legacy of our forefathers and what they fought for, and the sacrifices they made to make our country a beacon of freedom, democracy, the rule of law, tolerance, respect of each other’s beliefs, and of justice.

Accordingly, we have to disassociate ourselves from Turkey and Azerbaijan. The joint war on Armenians is part of a premeditated attempt to undermine the Minsk Group (headed by the United States, France, and Russia) which intended to find a peaceful solution for the conflict in southern Caucuses. Furthermore, it is an attempt by the Azeri president to use the Nagorno-Karabakh conflict to whip up nationalist fervor, to suppress internal opponents, and divert attention from his clan’s totalitarian and corrupt regime. The world’s pre-eminent expert on the region, Thomas de Waal stated recently: “Armenia lacks incentives to launch military action now, Azerbaijan moved in first.” He added, “For various reasons, Azerbaijan calculates that military action will win it something.”

The most worrisome aspect of the Azeri belligerence is Turkish President Erdogan’s open support of Azerbaijan. Turkey is supplying military hardware and Syrian mercenaries to boost his Azeri ally’s war. Regrettably, the Turkish republic under the leadership of President Erdogan is becoming rogue state.

Many media outlets- among them the British “Guardian” and “Reuters”, have reported that Turkey is transporting thousands of Syrian mercenaries to the battlefronts to terrorize the Armenian population.  President Macron of France stated: “We now have information which indicates that Syrian fighters from jihadist groups have (transited) through Gaziantep (southeastern Turkey) to reach the Nagorno-Karabakh theatre of operations,” Macron told reporters on arrival at an EU summit in Brussels. “It is a very serious new fact, which changes the situation,” he added.

Both Ilham Aliyev and Recep Erdogan have become a danger to the world. They have sponsored terrorist mercenaries and hop-scotched them around the Middle East to fight their wars and to destabilize peaceful countries.

As a NATO member, Turkey is abusing and taking advantage of its privileges as a member of the alliance. There are increasing demands in Canada, the U.S, and Europe to expel Turkey from NATO.  These academia, politicians, journalists, and institutions, are warning us that President Erdogan is an untrustworthy ally and is using NATO alliance to advance his

megalomaniacal plan to recreate the corrupt Ottoman Empire and anoint himself as the new Sultan. Even his NATO allies Greece and Cyprus are not spared his menace.

Canada cannot be seen as an accomplice and enabler to a so-called ally. I call upon the Canadian Government to:

3-      To expel Turkey from the G20 forum and other international organizations.

4-       To bring President Erdogan and Aliyev to the International Criminal Court to be held accountable for the war crimes and crimes against humanity which they have committed.

5-      Recognize the independence of the Republic of Artsakh (Nagorono-Karabakh).

Canada and the free world must be resolute with Erdogan and his expansionist strategy. Otherwise, we would be repeating British Prime Minister Chamberlain’s misguided and grave appeasement policy with the Third Reich on the eve of the Second World War.

Unless we act now, history will judge us as an accomplice to the erosion of world peace and we will be responsible for major catastrophe for all of mankind. 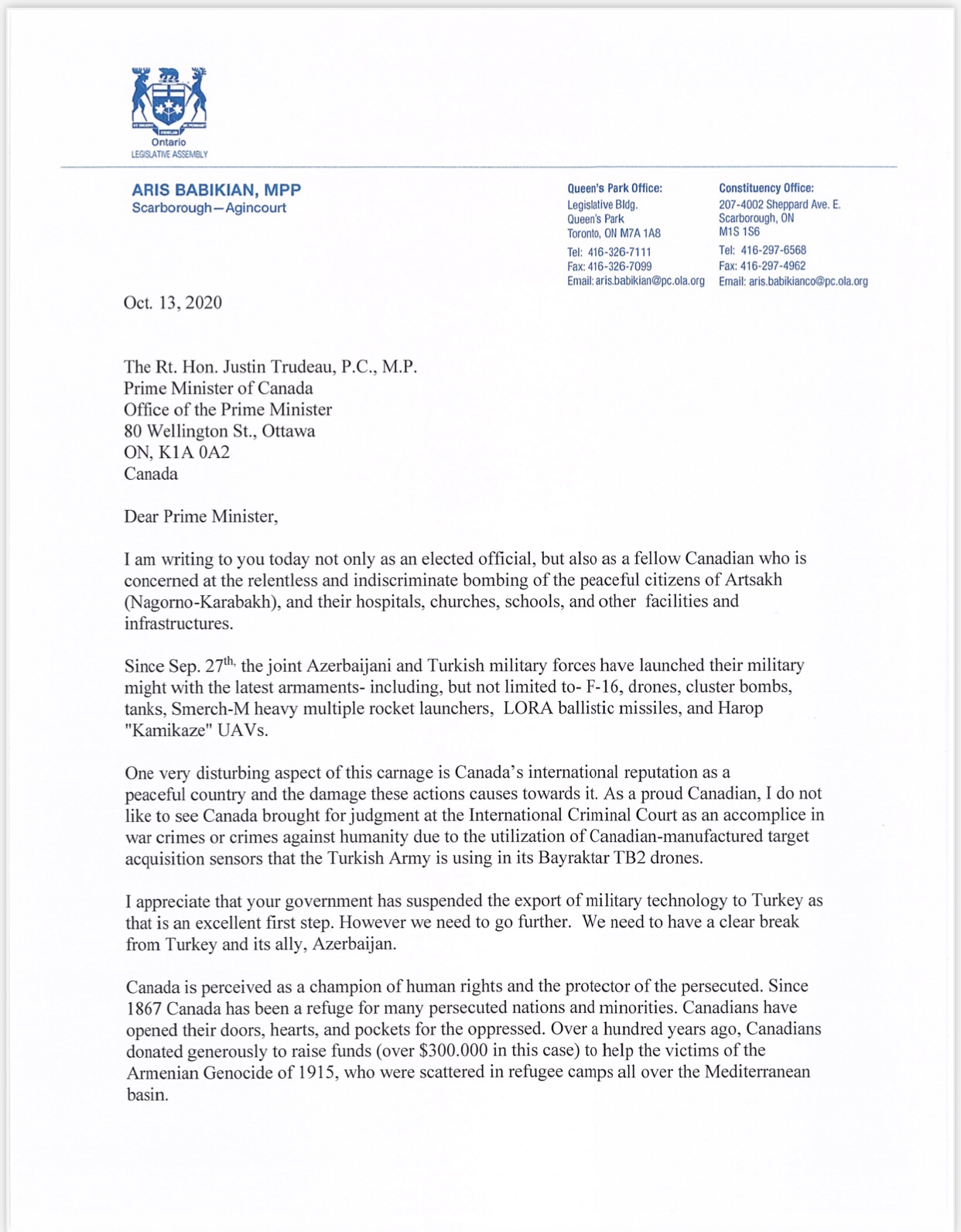 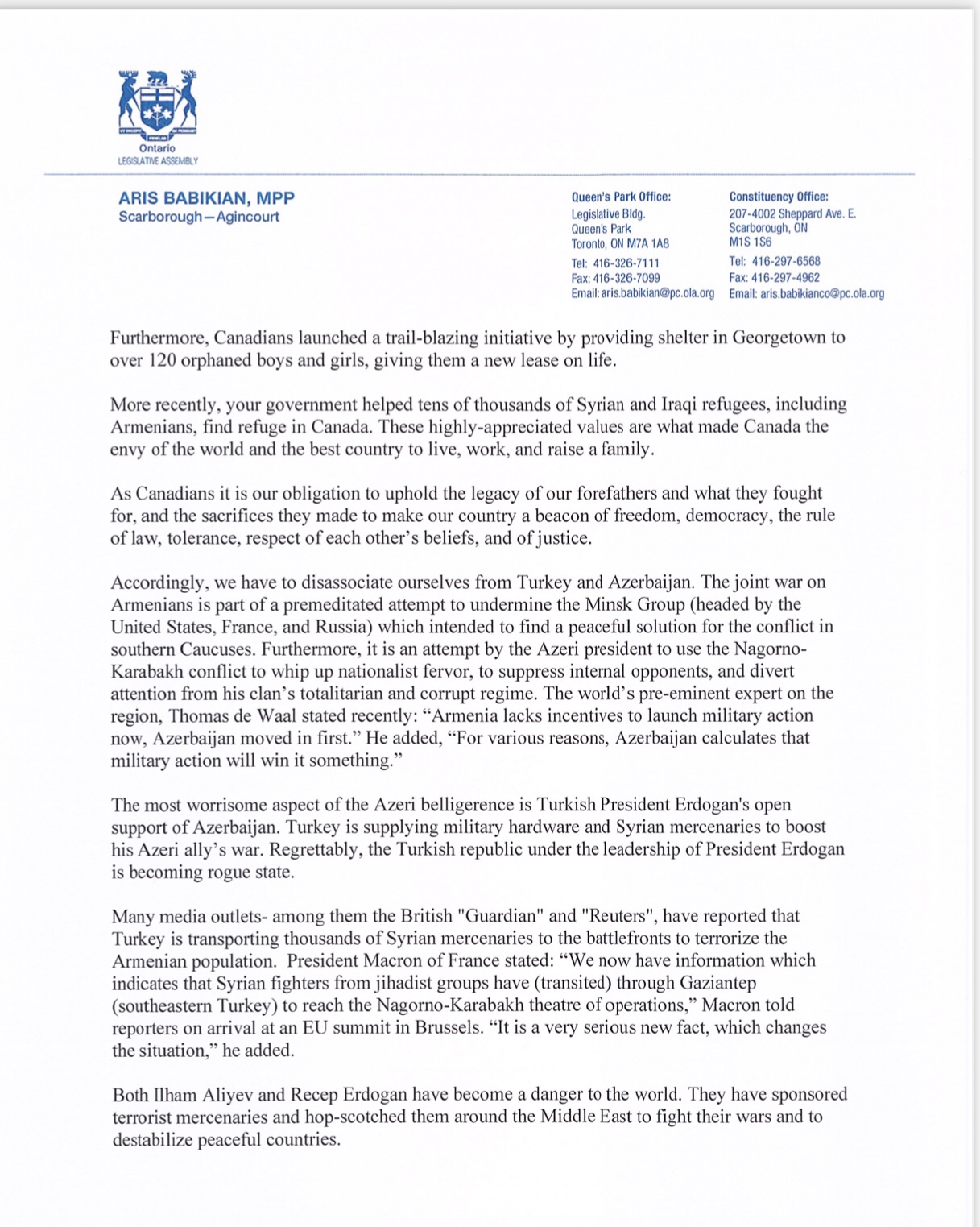 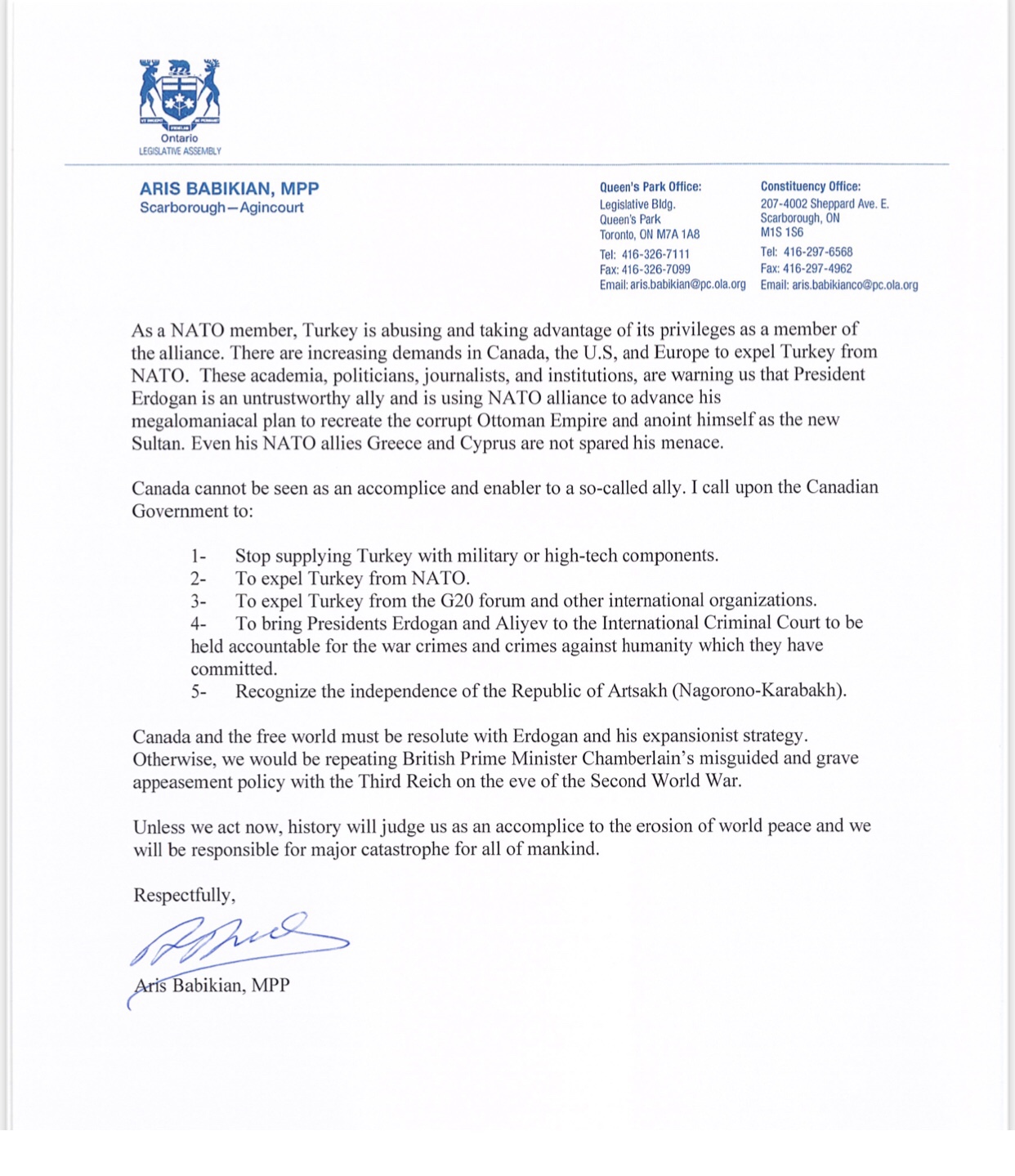