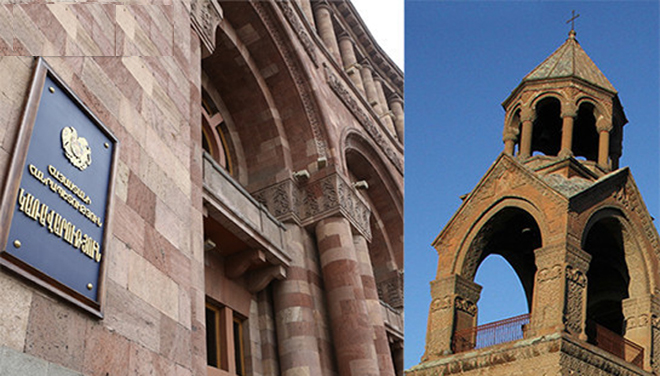 In the midst of the coronavirus pandemic which is killing hundreds of thousands of people around the world, including in Armenia, and paralyzing the economy and societal life as we know it, the biggest controversy these days in Armenia and the Armenian communities in the Diaspora has become a statement issued by His Holiness Karekin II, the Catholicos of All Armenians, and the harsh reaction by various Armenian officials and some members of the media.

Unfortunately, such a confrontation was not unexpected. Ever since the Velvet Revolution which brought Prime Minister Nikol Pashinyan to power in Armenia, there has been a tense atmosphere prevailing in Armenia and the Diaspora regarding those supporting Pashinyan’s government and those opposing it. While there is nothing wrong with being on the opposite sides of a political issue, the confrontation is so heated that often insults, profanities and even physical threats are exchanged, particularly on social media. In an earlier interview with the Armenian media, I had urged that Armenians should not treat those who disagree with them as enemies! I had said that “we can disagree without being disagreeable.”

It is understandable that most Armenians viewed the previous leaders as oppressors under whose unjust rule the Armenian people suffered tremendously. Hundreds of thousands of Armenians emigrated to Russia, Europe and North America not just because of economic hardships, but also due to social inequalities. Therefore, to a degree, it is natural that the majority of Armenians would harbor such toxic feelings toward the previous regimes.

However, I suggest that Armenians should focus on rebuilding Armenia’s economy rather than being consumed with hatred for the rest of their lives. Those who abused their positions and enriched themselves should be tried in courts and properly punished for their misdeeds.

Turning to the latest episode of the current acrimony, Catholicos Karekin II issued a statement to News.am last week, suggesting that former President Robert Kocharyan’s detention in prison be changed. Here is the translation of the statement by the Catholicos:

“Under the circumstances of this pandemic, we are seeing that in various countries of the world special attention is being paid to individuals who are detained in prisons, welcome steps are being taken toward releasing those who do not pose a danger to society or changing the terms of their detention, in order to protect them from this virus. In such issues the position of the Church is based on the divine message of love, care, and compassion, and in this context, our counsel is that the authorities of our homeland continue to take the necessary steps in this direction. Regarding Robert Kocharyan, the second President of Armenia, being informed of the expert opinions of doctors about his health, we consider it important that along with implementing justice all preventive means and measures be taken, including the changing of the method of detention, in order to protect his health from future complications during this pandemic period.”

The next day, Alen Simonyan, the Deputy Speaker of the Armenian Parliament and a member of the ruling party, wrote on his Facebook page the following harsh response to the Catholicos:

“Today Catholicos of All Armenians Karekin II said that he considers it important to change the terms of detention of Robert Kocharyan. Let me say that thousands of citizens of Armenia have already for a very long time considered it important the issue of changing the All Armenian Catholicos. I think citizen Ktrij Nersessian [the layman’s name of the Catholicos] who has been continuously silent, silent and silent for decades, today, under the new conditions, can freely be the guarantor of citizen Robert Kocharyan, and for that sufficient funds can be found.”

Also reacting to the Catholicos was Mane Gevorgyan, spokeswoman of the Prime Minister. She curtly stated that the government does not intend to comment on the “hopes and desires” of the Catholicos. The spokeswoman also recalled that Priest Vahram Melikyan, spokesman of the Mother See of Etchmiadzin, had presented a guarantee that if businessman Samvel Mayrapetyan is released from jail and goes to Germany for treatment, he would return to Armenia, but has not done so since January 2019.

To make matters worse, the Deputy Primate of the Diocese of Yerevan, Archbishop Navasard Kchoyan was charged by the Armenian government last week with fraud and money laundering. The National Security Service [NSS] claimed that Archbishop Kchoyan had colluded with an Armenian businessman to defraud a third person. The NSS announced that Kchoyan owned 33-percent of an offshore company. Archbishop Kchoyan’s lawyer denied the accusation.

Etchmiadzin reacted by urging government officials and the media to respect Archbishop Kchoyan’s presumption of innocence. The Church headquarters also stated that it is “bewildering” that the NSS announced the charges one day after Catholicos Karekin II called for a change in the detention terms of former President Kocharyan. Several high-ranking clergymen also criticized the officials who had attacked the Catholicos.

We hope that the mutual accusations will cease as Armenians would become more respectful of everyone’s freedom of speech without insulting those who disagree with them. At a time when the pandemic is taking many innocent lives and Armenia’s economy is in peril, it would be wiser to concentrate on resolving the grave issues facing our nation.

Since public gatherings are banned in most countries, the HyeID non-profit organization is suggesting a unique way of commemorating the Armenian Genocide this year from the comfort of your homes.

During the week of April 24, please go to the weblink: April24.hyeid.org and click “join,” indicating your agreement to the following statement: “We have to stay home this April 24, but we join the on-line march… We demand Justice for Turkey’s Genocide of 1.5 million Armenians in 1915.” Your agreement will be shown on the worldwide map on screen, indicating the number of those who have joined the on-line march in each country.