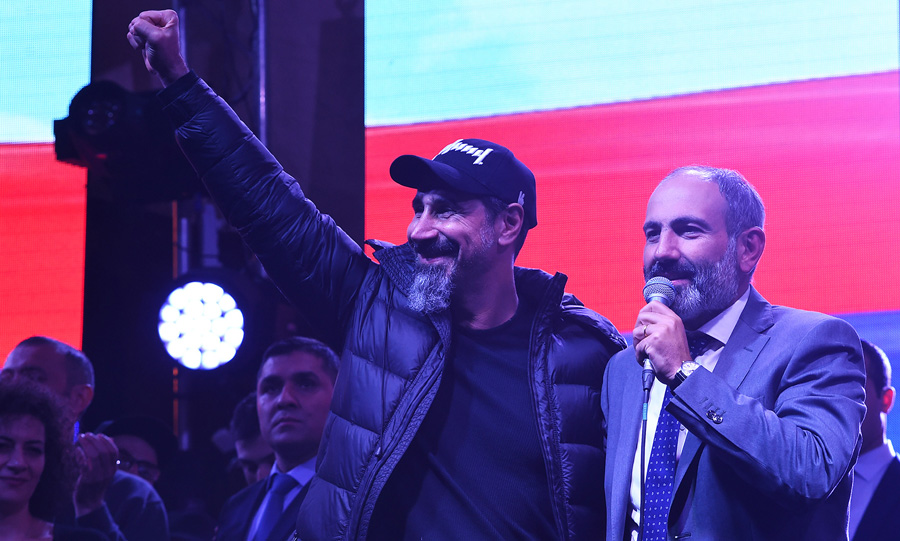 Pashinyan (right) and System of a down singer Serj Tankian

Exactly a month ago, Nikol Pashinyan was walking from village to village across Armenia in a desperate protest against a power grab by the country’s prime minister, Serzh Sargsyan.

On Tuesday Pashinyan, a fiery political orator who has spent the past decade in street politics, was himself elected as prime minister in a 59-42 vote in parliament, capping weeks of peaceful mass protests.

The Russian president, Vladimir Putin, was among the first to congratulate him. Pashinyan has offered assurances that he will not break with the Kremlin.

It has been an unlikely rise to power in the post-Soviet republic of about 3 million for the former newspaper editor. Before April, the ruling Republican party’s stranglehold on Armenian politics had appeared intact, with Sargsyan newly installed as prime minister after term limits forced him to step down as president after 10 years.

But governance changes that in tandem bolstered the prime minister’s office led to accusations that Sargsyan had manipulated the constitution to cling to power. Pashinyan and other activists brought out tens of thousands of people on to the streets for protests that paralysed the capital, Yerevan.

Sargsyan resigned on 23 April in a stunning concession to the opposition. Pashinyan, who had been detained and then released from jail during the protests, called for snap elections to choose a new “people’s prime minister”.

Supporters say Pashinyan, who was also imprisoned after opposition rallies in 2008 turned deadly, is among history’s great peaceful revolutionaries. “You can absolutely compare him with historical figures like Gandhi and Nelson Mandela,” said Eduard Aghajanyan, a city council member from Pashinyan’s Civil Contract party, and one of Pashinyan’s young, western-educated advisers.

It has been a dangerous road for Pashinyan. He was expelled from university in 1995 for his political activities, and faced libel charges as the editor-in-chief of Haykakan Zhamanak in 2000. His car was blown up in an apparent assassination attempt in 2004, and in 2008 he spent months in hiding after being accused of instigating political protests that ended with 10 people dead. He was sentenced to seven years in prison in 2010 but was released the following year under an amnesty.

He has publicly fallen out with other opposition leaders such as the former president Levon Ter-Petrosyan. In private, detractors say Pashinyan is a novice when it comes to working in government and unwilling to compromise. He entered parliament in 2016 as a member of a coalition of opposition parties.

He has a flair for the theatrical. Last month Pashinyan told Sargsyan in face-to-face discussions that he had “come to discuss your resignation”. Sargsyan called the demand “political blackmail” and walked out of negotiations.

Pashinyan has however shown a deft political touch over the past month, running a gauntlet of thorny political questions including whether Armenia should maintain close ties with Russia and whether there should be a purge of former ruling party officials and a criminal trial into the deaths of protesters in 2008.

In an interview with the Guardian during the protests, Pashinyan said dark political forces had been trying to derail Armenia’s peaceful revolution. His aides said Karen Karapetyan, the prime minister from September 2016 until last month, and who is close to Russia, had sought backroom deals to derail a vote last week for Pashinyan to become PM, which he lost.

He spoke of plans to further open Armenia to foreign business and break the control over certain industries held by businessmen close to the previous regime.

Still, he and his supporters have largely skirted policy discussions in favour of rallying cries for reform in the poor country of about 3 million people, which borders Turkey and Iran and is locked in a simmering territorial conflict with another neighbour, Azerbaijan.

There is a touch of the populist in Pashinyan – he has donned a camouflage T-shirt for some speeches, but returned to a suit for negotiations with other parties. “He is not a populist. He is popular,” said Ararat Mirzoyan, a fellow member of Civil Contract, who was arrested with Pashinyan last month.

Mirzoyan said he had seen Pashinyan grow as a leader in recent years as the two worked together in parliament. Asked about the party’s specific policies, he said: “Only once we achieve fundamental reforms can we begin talking about the changes for the future sector by sector.”