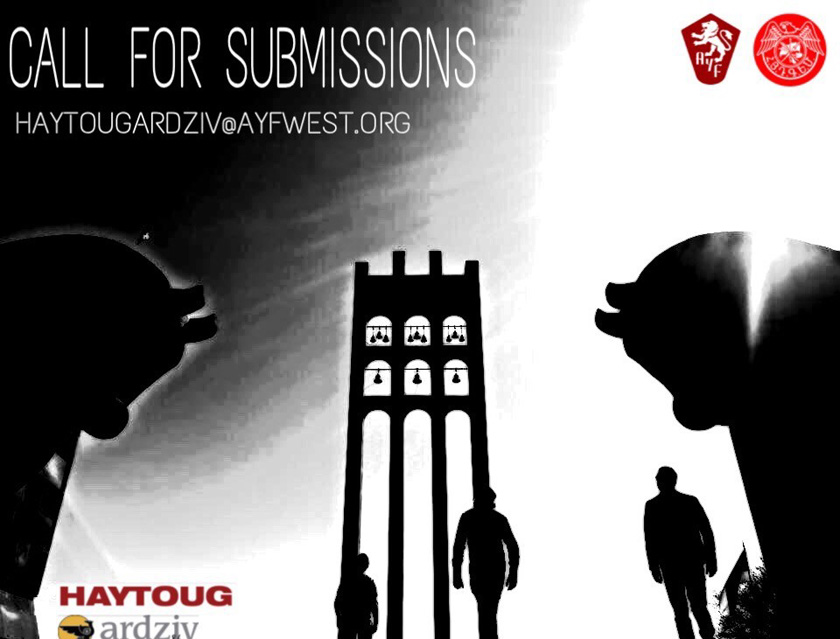 Submissions are now being welcomed for the 100th Anniversary of the First Republic of Armenia Issue of Haytoug and Ardziv Magazines, a collaboration of the official publications of the Armenian Youth Federation (AYF) Western United States and AYF Canada.

Haytoug and Ardziv invites submissions in English and Armenian of all mediums including written pieces, photography, film, and art, for print and online publication. The issue will cover topics and matters regarding the past, present, and future of the Armenian nation since the first republic’s establishment.

Ideas of topics include:

The editorial staff is open to any further ideas relating to the theme.

Please send all submissions to haytoug@ayfwest.org. The deadline for print consideration is June 8, 2018.

In 1976, the AYF Western United States established its official publication, Haytoug, as a medium for Armenian-American youth to voice their opinions about a wide variety of issues. What initially began as a newsletter eventually evolved into a quarterly magazine with over 100

Haytoug is published by AYF and distributed free of charge within the community.

The opinions expressed in Haytoug are not solely and necessarily the opinions of the Armenian Youth Federation.

Ardziv magazine was first published by the Armenian Youth Federation of Canada in April 1991. It has been distributed free of charge within the community for those who strive for the national, social, and economic liberation of the Armenian people. Although the magazine had gone dormant for a few years, it’s new format as a monthly publication has made its way back into the homes of Armenians across the country. It has, and continues to be, the leading voice of the Armenian-Canadian youth.

The opinions expressed in Ardziv are not solely and necessarily the opinions of the Armenian Youth Federation of Canada. Ardziv encourages all Armenian youth to express their thoughts and feature their work in this publication.