Freed from the shadow of tragedy Armenian girls reunited in Toronto 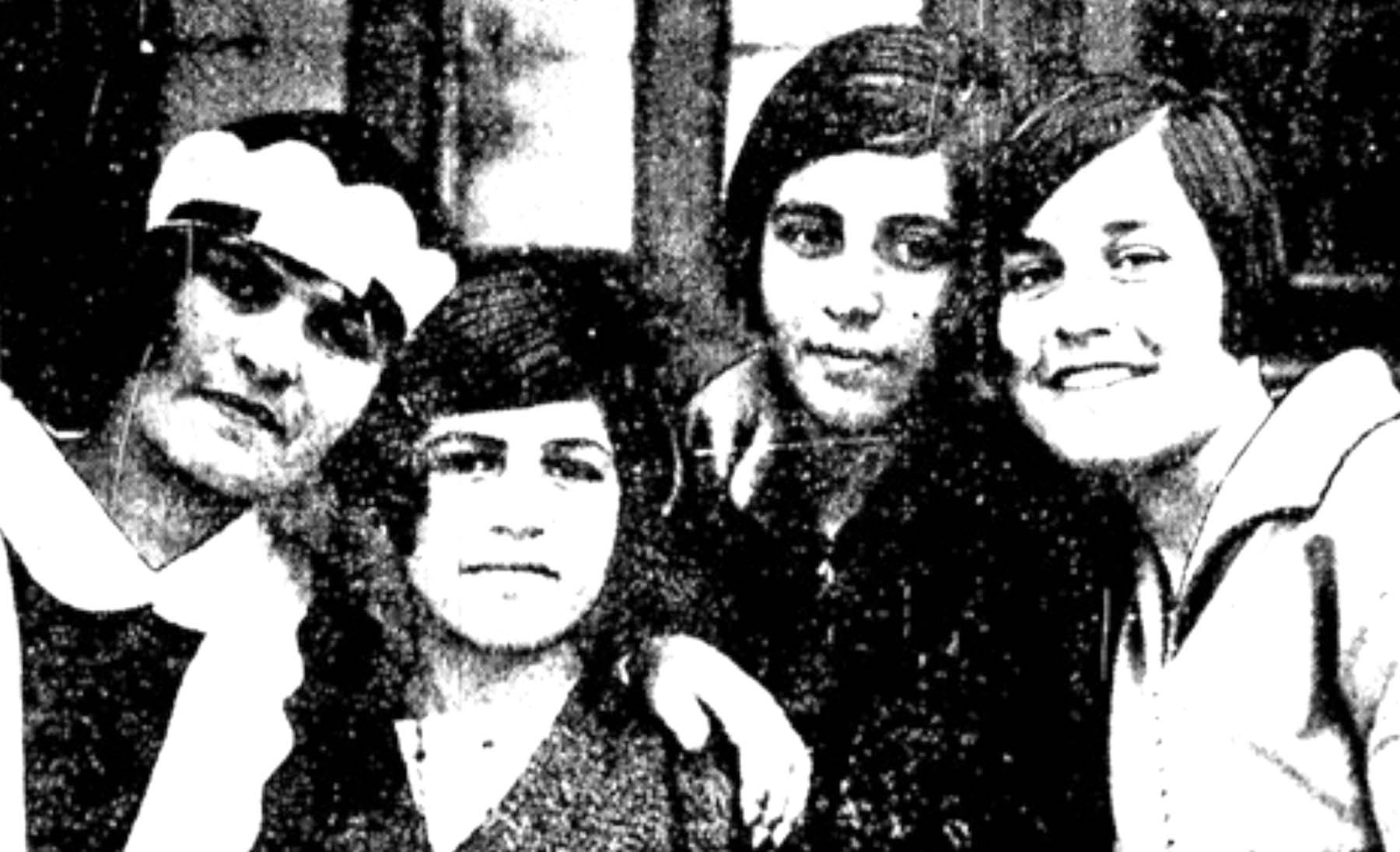 PHOTO CAPTION: These four younger sisters came together at the Union Station yesterday for the first time since they parted at the Near East Relief Orphanage at Sidon. Their father was murdered by Turkish soldiers in 1915, and their mother died of grief a few weeks later. Their name is Kavookjian, and from left to right the group shows Maritza 18, Armeny 11, Vartoohi 16, and Araxie 17.

This article was published in the April 13, 1926 issue of the Toronto Star

Father killed by Turks in camp

Mother dies of a broken heart

There is tremulous happiness in the hearts of four young Armenian girls here to-day. They are together again,and life, which for them has always been a compound of fear, horror and grief, seems to offer prospects that are almost perplexingly bright by contrast with the past.

It is a year and a half since Maritza and Araxie Kavookjian left their two younger sisters in the Near East Relief  orphanage ar Sidon to cross the Atlantic. They were in the hands of good friends, but life in the hand of  the Turk had taught them to look on any separation with dread. and the dream of a peaceful existence in Canada was mixed with uncertainly. Besides, they had no one else in the world except each other; and when, at the end of eighteen long months, they met again yesterday at the Union Station and the dream seemed verging on fulfillment, their emotions left them speechless.

Maritza, who is eighteen, and the eldest, wept with sheer excitement and happniness. Araxie, Vartoohi and little Armeny just giggled. All four were giggling as they told their story to The Star to-day, for Maritza, who is the only one who can clearly remember how the shadow of the tragedy entered their lives nearly eleven years ago, had dried her tears and wore a smile that was like April sunshine.

It was in 1915 that sorrow came. Their father was a prosperous cloth merchant in the little city of Malatia near the center of Asia Minor. He lived in happiness with his wife, four daughters and baby son untill one day the Turkish soldiers arrived and carried him off to an “Internment camp” with his brother. There his story ends, for Armenian prisoners  in the hands of  the Turk  had only one fate to expect in those days. They were herded together and butchered-ingeniously and economically, for ammunition was scarce, A missionary’s account of what he saw at one of these shambles sheds sufficient light on that.

Around the shores of a small lake, he estimated a total of ten thousand Armenian corpses, bayonetted, clubbed to death or drowned with the marks of barbarous cruelty plain upon them. Though the Kavookjians never knew what became of their father, the fact that they did not hear from him again answered all doubts as to his fate.

In that grief-stricken home within the next six weeks  the mother died of a broken heart, and a little while afterward her little son followed her.

“We do not know what was wrong with her, she just died,” said Araxie to-day. “Grandmother said afterward that she must have been thinking of our father.”

Relatives came to the rescue of the bereaved little brood, and succeeded in placing them in a relief orphanage in near-by Harput, where they remained till the end of the war, Armeny, only eleven now, was too young for solid food, and Araxie, six years older, took care of her as she grew out of infancy.

“I am her mother,” she said proudly to-day, with her arm around the little girl’s neck.

With the close of the war they were evacuated to Sidon, in Syria, till the opportunity came through the good offices of Rev. Ira Pierce, 457  Marion street, who had spent the war in Asia Minor as a prisoner of the Turk, to bring the two elder sisters to Canada. An uncle in Brockton, Mass. paid for their passage; Mr. Pierce and his wife undertook their care.

Neither knew English, but they set about learning it and soon secured positions in domestic service, one with Mrs. L. Babayan, and the other at the home of Prof. S. R. Crerar. Then their hope of reunion began to materialize. They scraped their quarters together, and by the beginning of this year had, in addition to supporting themselves, saved $100 toward bringing the two younger sisters from Sidon. Once more the uncle in Brockton helped; and yesterday morning Vartoohi and Armeny  arrived aboard the Montreal train in charge of the Y.M.C.A. escort with whom they had made the journey.

Maritza had not slept the previous night. She was beside herself with anticipation. her spirits drooped when she found at the station that they were not allowed on the platform.

“My sisters are coming; I must be there to meet them,” she told the gateman; and persistence won the day. When the train pulled in, she Araxie and Mrs. Pierce were there to see the new arrivals and for a few minutes they were so completely entwined in each other’s arms that you could hardly tell which was which.

Mrs. F. L. Davidson, with whom maritza is now employed, cannot speak too highly of her. “She is spotlessly clean, industrious and obedient,” she says. “The girls speak well for the orphanage they were brought up in.”

Their present plans speak well for them, too. The three older girls are going to devote their savings for the next few years to supporting little Armeny in order that she may go to a Canadian school and learn English.

They are together again, and that is all they ask of life for the present.