For 3rd straight year, Turkey jailed more journalists than any other country 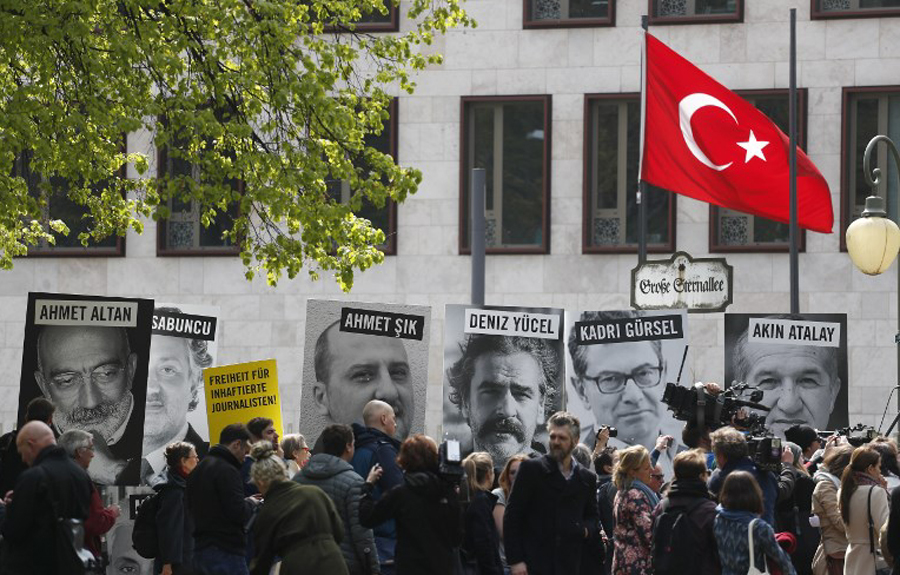 File image shows Amnesty International and Reporters without Borders activists posing with portraits of Turkish journalists detained in Turkey in front of the Turkish embassy in Berlin, March 2017. Ph

The Committee to Protect Journalist (CPJ) reported that Turkey is leading the world in jailing of journalists, notably beating out China, Egypt, and Saudia Arabia.

“For the third consecutive year, every journalist imprisoned in Turkey is facing anti-state charges,” read a CPJ report released on Thursday.
The US-based nonprofit organization monitors the protection of journalists worldwide. It found at least 251 journalists are being held across the world — 68 in Turkey alone.

“In the course of the year, dozens more have been jailed or released, as prosecutors continue to seek arrest warrants and apply new charges, and courts ordered some journalists released pending trial and acquitted others. 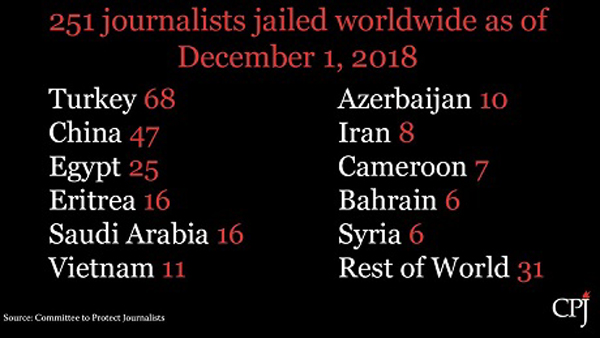 Turkey used the failed military coup of 2016 to implement a state of emergency that was renewed every 90 days until July. Despite its expiration, Ankara continues to target dissent among journalists, newspapers, and media outlets.

Turkey switched from a parliamentary to a presidential system in June. It greatly weakened the judiciary and legislative branches, giving increased and unchecked powers to the executive branch.
CPJ noted that even those on the “periphery of the journalistic profession” are not immune to scrutiny. Printing house operators and security guards, including 13 staff at Gun Printing House, were not included in the 68 sum.

“Their “crime” is evidently printing Özgürlükçü Demokrasi, a pro-Kurdish daily paper that the government took over and eventually shut down. Several journalists affiliated with the paper, who are included in the prison census, are detained on accusations of supporting the banned Kurdistan Workers’ Party, or PKK,” stated CPJ.

Turkey regularly detains or arrests journalists, artists, and politicians on alleged ties to the PKK or the Gulen Movement. Attending funerals of PKK fighters and speaking against Turkey’s assault on Afrin has been enough to land dozens of its citizens in jail.

Turkey regularly dismisses international reports by Human Rights Watch, Amnesty International, CPJ and others, arguing that they use questionable means to gather their information and are inherently trying to undermine the Republic of Turkey.