Followers of Armenian Church should have unimpeded access to Shushi Cathedral: One year after the attack 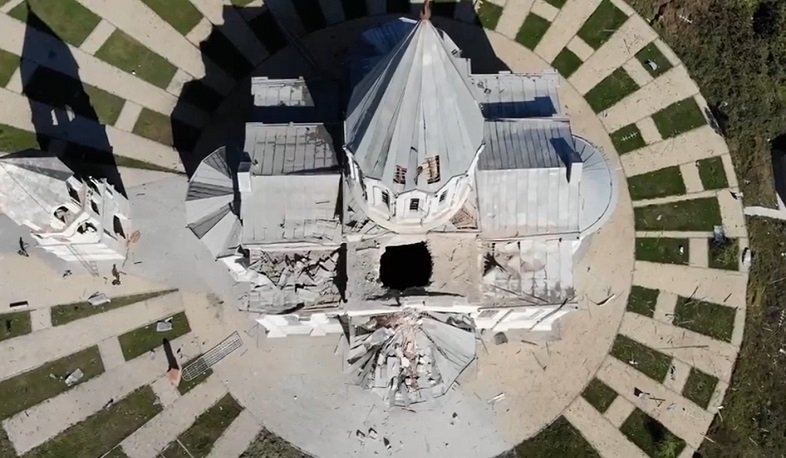 Armradio – The Cathedral of Shushi is one of the most important centers of the Armenian Apostolic Church in Artsakh, and the servants and followers of the Armenian Church should have an unimpeded access to this sanctuary, Spokesperson for the Armenian Ministry of Foreign Affairs Vahan Hunanyan said in a statement on the anniversary of the strikes on the place of worship by Azerbaijan during the aggression unleashed against Artsakh in the fall 2020.

On October 8, 2020, during the military aggression unleashed against Artsakh and its people, the Azerbaijani armed forces launched double air strikes on the Holy Savior Ghazanchetsots Cathedral in Shushi with high-precision weapons, causing significant damage to the latter. A few days after the Trilateral Statement of November 9, the same church was vandalized and desecrated. Along with the physical damage of the Shushi Cathedral, Azerbaijan continues the attempts of distorting the Armenian identity of the church by changing the architectural appearance of the church under the pretext of renovation.

“The repeated deliberate strikes on a place of worship is not only a condemnable crime under international law, in particular the Convention for the Protection of Cultural Property in the Event of Armed Conflict (1954) and its Second Protocol (1999), but also as a symbolic demonstration of the intent. It is a clear manifestation of Azerbaijan’s policy aimed at annihilating any trace of the Armenian presence in Artsakh,” the Spokesperson said.

He noted that a year after the aggression unleashed by Azerbaijan against Artsakh, the fate of around 1,500 historical and cultural heritage sites and places of worship, as well as thousands of museum specimens in the territories of Artsakh fallen under the control of Azerbaijan, remains uncertain and endangered.

“There are many documented cases of deliberate destruction and vandalism of Armenian churches, other cultural and religious monuments by the Azerbaijani armed forces. Besides, along with their physical destruction, we are observing the falsification of historical facts and distortion of the identity of Armenian monuments by Azerbaijan,” Hunanyan added.

“In this context, apparently, it’s no coincidence that Azerbaijan continues blocking or, as far as possible, restricting the access of the UNESCO expert mission to the endangered Armenian cultural heritage sites, attempting to conceal its war crimes,” he noted.

The Spokesperson stressed that the vandalism against historic-cultural monuments and places of worship representing people’s cultural and spiritual heritage, are flagrant violations of international law, contradict universal values and are strongly condemnable.